Build Back Better: The Solution to Solar Supply Chain Problems and Price Increases 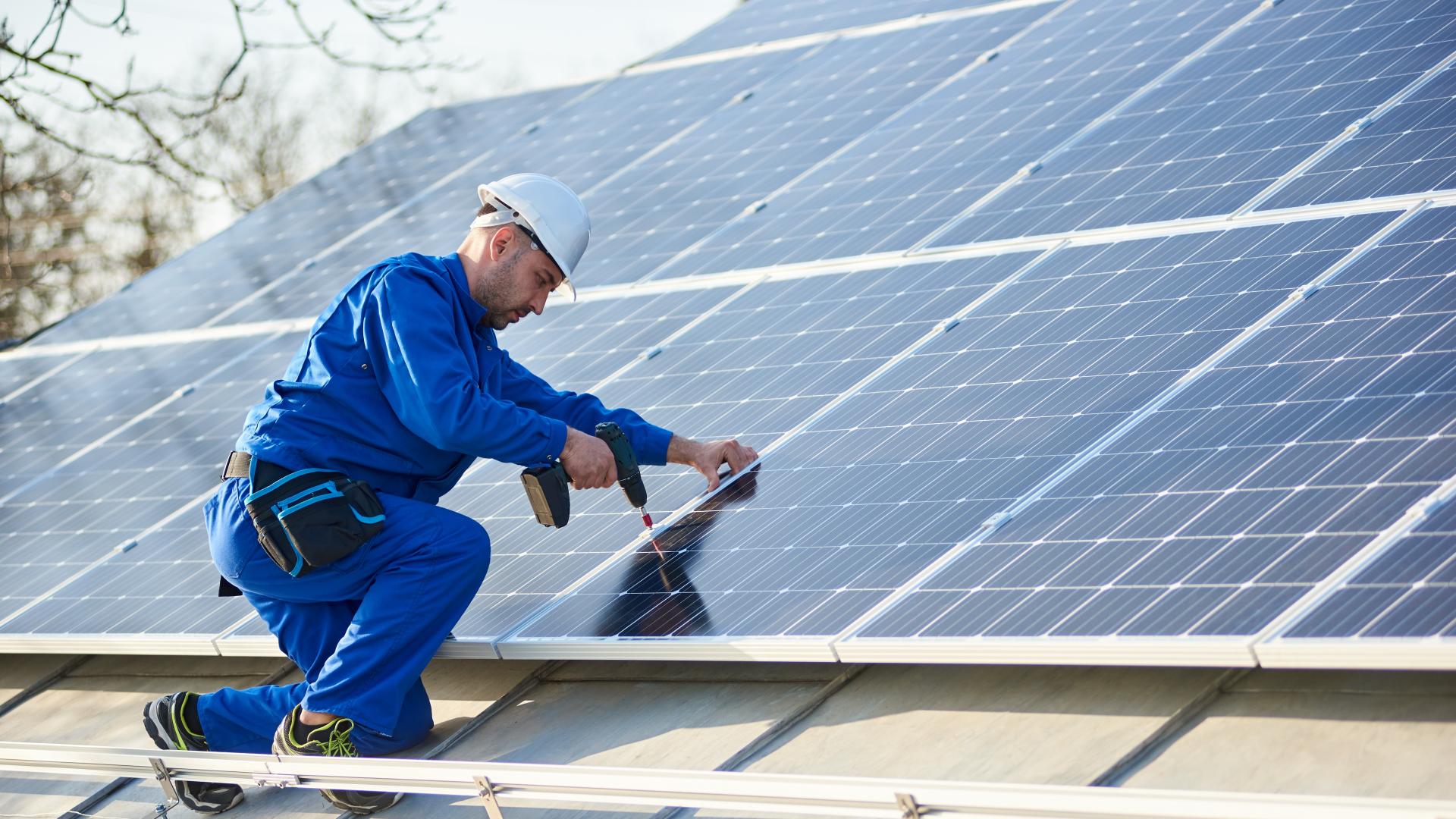 Supply chains are backlogged and prices have increased for raw materials and consumer goods across the economy. The clean energy sector is no different, and has been feeling the supply pinch for most of 2021. This has put years-long price declines in reverse in a matter of months.

However, there is a solution that will offset price increases and unleash a new era of American clean energy leadership: The Build Back Better Act.

This historic legislation features the most ambitious and transformational clean energy policies ever considered by the Congress. It includes a 10-year extension of the solar Investment Tax Credit (ITC) with direct pay, significant domestic manufacturing incentives, tax credits for energy storage and transmission, workforce development provisions and a suite of additional policies that will help America lead the world’s transition to a clean energy economy.

The latest U.S. Solar Market Insight report shows that passing the Build Back Better Act will spark an avalanche of solar development and economic activity in every state across the country. The report forecasts that if the bill becomes law, the total amount of solar deployed in the U.S. will reach 300 gigawatts (GW) in the next five years. That's triple the amount of solar capacity installed today in the United States.

The bill would also be a boon for local communities and American workers. The Build Back Better Act would drive $234 billion into the economy from 2022-2026 and require at least 450,000 workers to get it done, which is double the size of today's solar workforce. 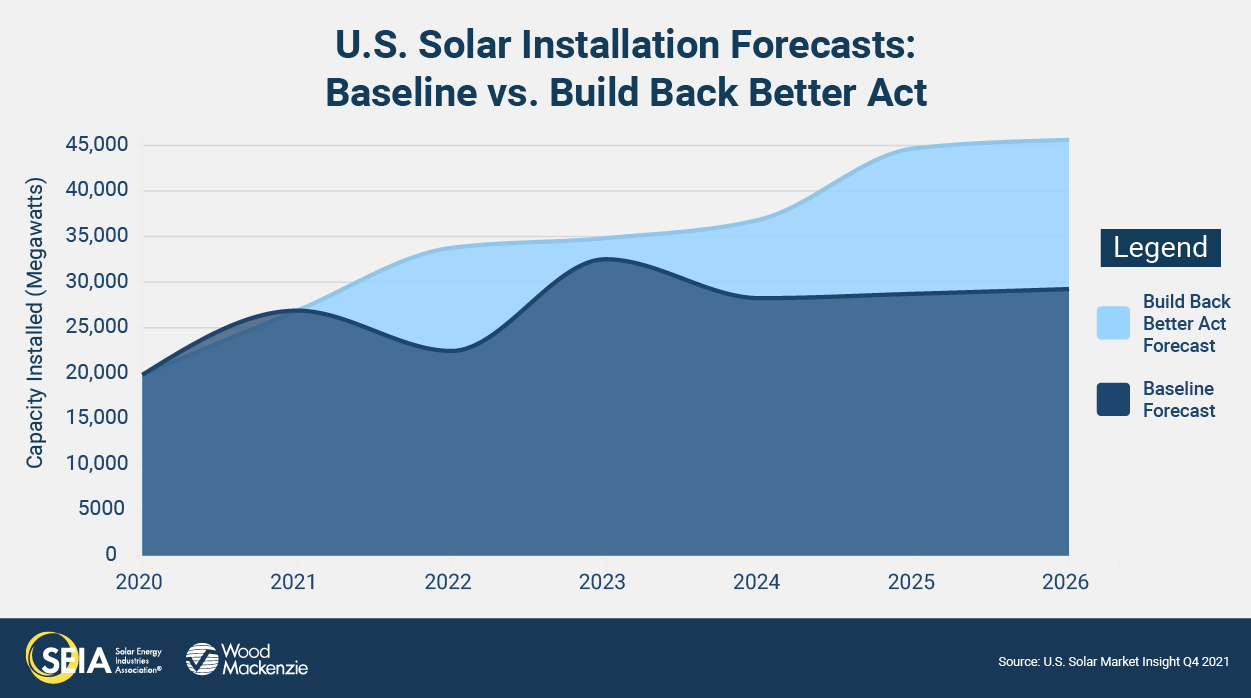 And it couldn’t come at a better time. President Biden has set a bold target to reach 100% carbon-free electricity by 2035, and this legislation will be the catalyst for U.S. solar and storage companies to lead this transition. The solar capacity sparked by this legislation will offset an additional 400 million metric tons of carbon by 2030, making it a powerful tool to combat climate change.

This jolt of clean energy investment will not just flow to large solar markets. Smaller, less established markets will see significant increases in solar deployment and the jobs and private sector investment that come with it. The number of states with over 1 GW of solar installed will double from 21 to 42. States like Oklahoma, Wisconsin, Kansas, Iowa and Montana will see their small solar markets grow into robust industries that are vital to the state economy, while large solar markets such as Texas, California, Nevada and New York will continue to flourish. 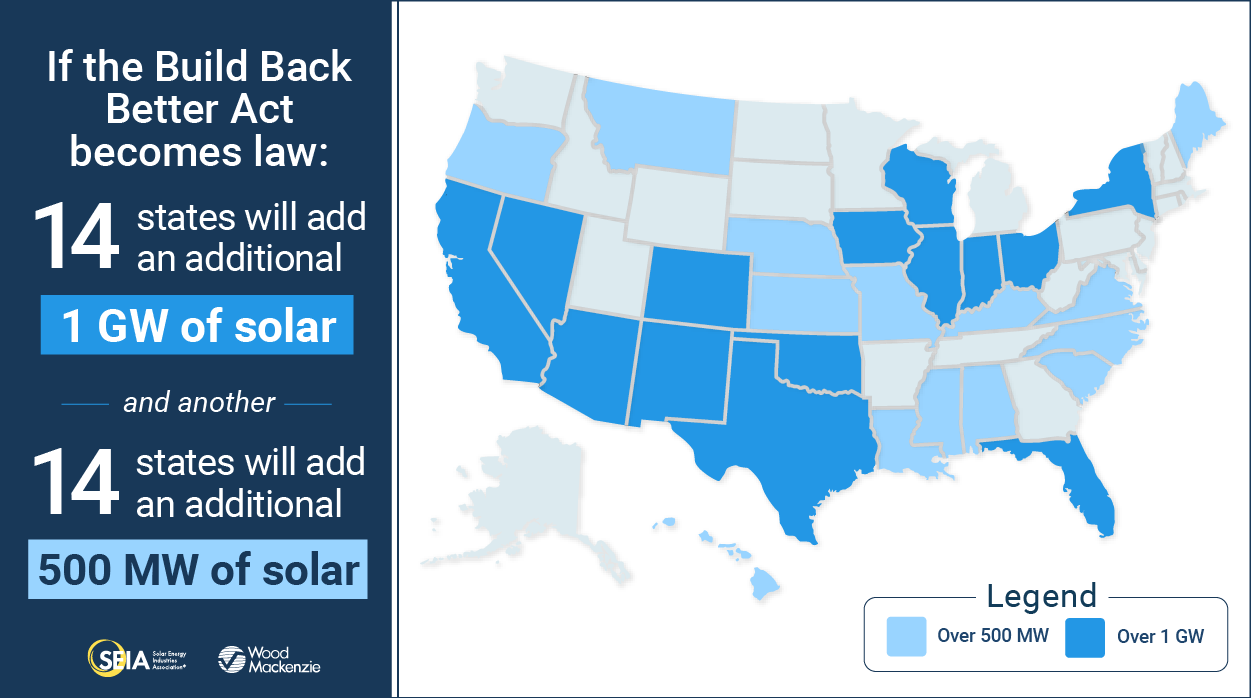 Clean energy provisions in the Build Back Better Act are about so much more than just deployment. Senator Ossoff’s Solar Energy Manufacturing for America Act is critical to growing a larger share of the solar supply chain here at home. Building new manufacturing capacity will help stave off trade and supply chain headwinds, while creating thousands of new careers in underserved communities.

As we manufacture and install solar at a historic pace, the Build Back Better Act will also incentivize new transmission capacity and boost energy storage to help ease the integration of more solar on the grid.

There has been a lot of rhetoric this year that additional federal investment may worsen price increases. The forecasts are clear that this isn’t the case. Supply chain constraints are the primary driver of price spikes, and the Build Back Better Act is the antidote the clean energy sector needs to drive a wave of economic prosperity into cities and small towns across the country.

The Inflation Reduction Act Is Law, but Implementation Will Determine How it Works for Decades to Come

The landmark Inflation Reduction Act (IRA) has changed the trajectory of the U.S. energy market, sparking a projected five-fold increase in the size of America’s $33 billion solar and storage industry over the next decade.

ANAHEIM, Calif. — As the U.S. solar and storage industry gathers for the first time in three years at RE+ 2022, the Solar Energy Industries Association (SEIA) is laying out a renewed vision for the next decade of clean energy advocacy after a chain of policy successes, from President Biden’s solar tariff proclamation to the historic Inflation Reduction Act (IRA).