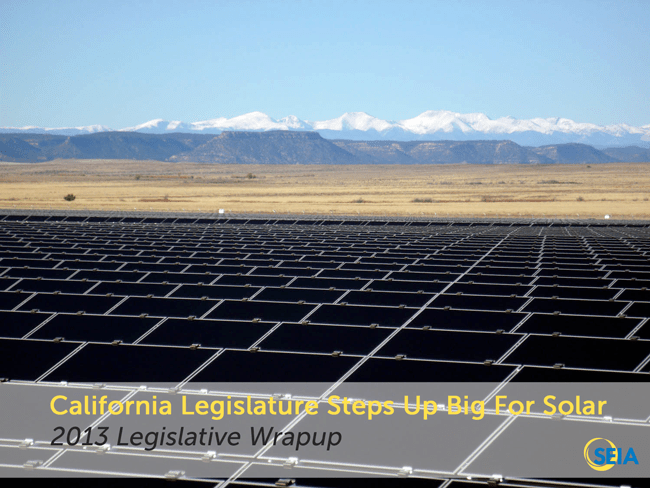 On average, the sun shines in Sacramento, California, 265 days a year.  Well, it looks like even more clear skies and sunny days ahead as the state wrapped up its legislative session on a high note.

Four significant solar-related bills were approved by the State Senate and State Assembly – and all four are expected to be signed into law by Governor Jerry Brown.   These bills will help to foster the continued growth of solar generation in California, which already ranks #1 in the nation in total installed solar capacity with 3,761 megawatts (MW) – three times more than any other state.  What’s more, solar now provides nearly 44,000 good-paying jobs across the state, while saving money for hundreds of thousands of Californians on their utility bills.

Here’s a quick recap of the legislation:

1)    Authorizes CPUC to procure renewable resources beyond the 2020 33 percent Renewable Portfolio Standard (RPS) target. This clarifies that the RPS is a floor, not a ceiling.

2)    Clarifies that Net Energy Metering (NEM) must be offered without interruption to eligible customer-generators until July 1, 2017, or until the IOU reaches its share of the current 5 percent NEM cap, whichever occurs first. This effectively removes the looming 2015 NEM Program suspension.

4)    Establishes a process for CPUC to develop and implement new NEM Program rules that will take effect by July 1, 2017.

5)    Requires CPUC to establish rules by March 31, 2014 for the grandfathering of existing NEM customers, who took service under the current rules, when new NEM rules take effect. Directs CPUC to protect solar customers under new NEM rules from unreasonable or discriminatory charges.

In the final analysis, California has once again proven to be a national leader when it comes to smart, forward-looking solar policies.  We applaud the State Legislature and Governor Brown for their continued commitment to clean energy – and a cleaner environment.

California made history back in May when the California Energy Commission (CEC) approved a new policy that will require virtually all new homes in the state to incorporate solar energy starting in 2020. Today that history was cemented with the California Building Standards Commission’s (CBSC) unanimous approval of the CEC’s Title 24 energy code amendments.