Solar Accounts For Nearly 75% Of All New Electric Capacity In U.S.

According to FERC 99.3% Came From Renewables 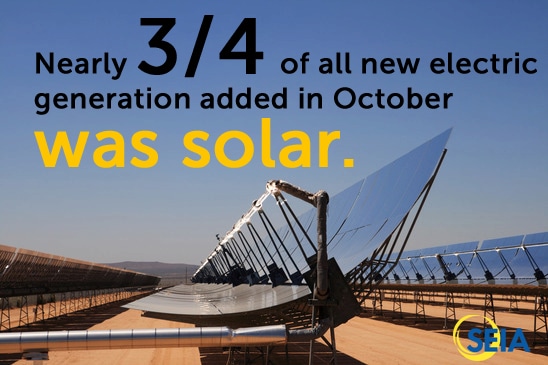 According to the FERC's “Energy Infrastructure Update” report, 99.3 percent of all new electric generation placed in service during the month of October came from renewables – with solar leading the way by a country mile!

Twelve new solar units accounted for 504 MW or 72.1 percent of all new capacity last month.  This is truly astonishing, not to mention historic, and should serve as a reminder to everyone in Washington and in state capitals that smart public policies – such as the solar Investment Tax Credit (ITC), Net Energy Metering (NEM) and Renewable Portfolio Standards (RPS) – are paying huge dividends for America.

Today, solar is one of the fastest-growing sources of new energy in the United States.  More than 30 utility-scale, clean energy solar projects are still under construction, putting thousands of electricians, steelworkers and laborers to work and helping to reduce carbon emissions from power plants.  These facilities, along with rooftop solar on homes, businesses and schools, will generate electricity for generations to come.

There are now more than 9,400 megawatts (MW) of cumulative solar electric capacityinstalled in the U.S. – enough to power more than 1.5 million American homes – and that number is expected to hit nearly 13,000 MW by the end of this year.

In addition, SEIA recently released a comprehensive new report outlining ways to create 50,250 new American jobs and save more than $61 billion in future energy costs by expanding the use of innovative and cost-effective solar heating and cooling (SHC) systems across the nation.

Today, solar employs nearly 120,000 Americans at more than 6,100 companies, most of which are small businesses spread across the United States, making solar one of the fastest-growing industries in America.  Part of this amazing growth is attributed to the fact that the cost of a solar system has dropped by nearly 40 percent over the past two years, making solar more affordable – and more popular – than ever.  And as solar continues to scale up, costs will continue to come down. 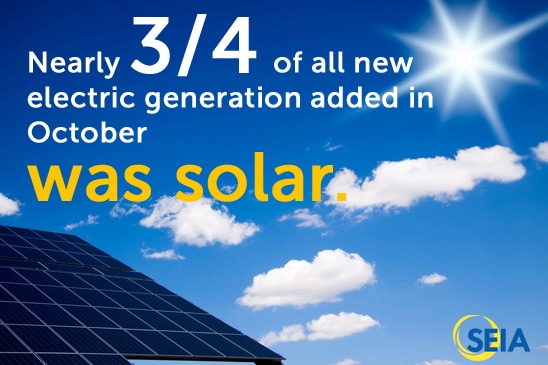