Tariffs Take a Bite Out of American Solar Jobs

Last week marked one year since the Trump administration implemented steep tariffs on imported solar cells and modules, ending nearly a year of turmoil and uncertainty for the solar industry and its quarter-of-a-million workers.

When the announcement of new tariffs was made, the Administration hoped it would spark U.S. job growth, however, today’s release of The Solar Foundation’s National Solar Jobs Census 2018 shows that the opposite occurred. After seven years of steady, historic growth, the census reports an overall decline of nearly 8,000 solar jobs compared to 2017, marking the second consecutive year that solar jobs have declined. It’s not a coincidence that those are also the two years in which the industry was dealing with the looming reality of increased costs from tariffs coming down the pike, followed by their implementation and enforcement.

What is clear from this jobs report is that the solar tariffs are having an adverse effect on the U.S. economy, and on the lives of thousands of American families. In our statement this morning, we reinforced that the tariffs should be reversed:

“We hope this data serves as a wake-up call to the administration that the Section 201 tariffs should be reversed before any more Americans lose their jobs,” says Abigail Ross Hopper, president and CEO of SEIA.

Despite these recent challenges, though, many emerging markets saw solar job growth in 2018, and the U.S. solar industry’s long-term growth trajectories remain strong. 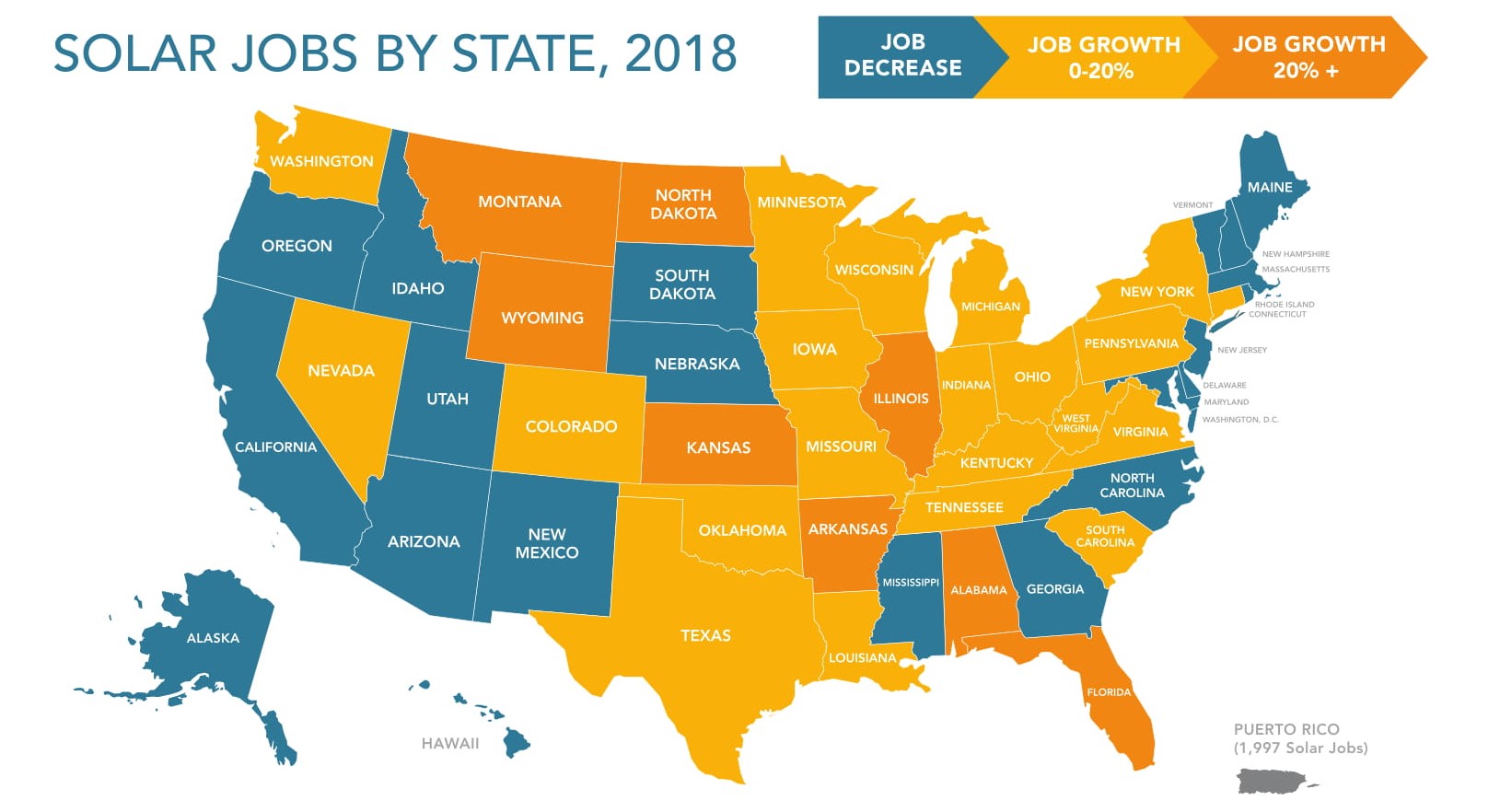 Florida added nearly 2,000 new solar jobs in 2018, eclipsing 10,000 total jobs in the state and keeping pace with its strong overall growth as a solar market. Other emerging markets, like Illinois and Texas, also experienced impressive job growth in the census, adding 1,308 and 739 solar jobs, respectively. In all, the solar industry saw a net gain of jobs in 29 states.

This year, the National Solar Jobs Census is also tracking new markets, like Puerto Rico, and rapidly expanding sectors, like solar plus storage.

Here is one more fact that’s worth hammering home: Since 2010, the U.S. solar industry has remained an economic engine for communities and states across the country, adding almost 150,000 well-paying jobs.

We remain committed to building on that success by removing policy barriers, like the import tariffs, that only serve to delay our inevitable transition to a clean energy future.

The Solar Decade is upon us, and the dozens of gigawatts of new solar capacity the U.S. is poised to add will be accompanied with quality job opportunities for all Americans in each of the 50+ states and territories.

Solar Industry Vows to Lead Power Generation in the 2020s

When energy and climate analysts look back on the 2020s, they will see a transformed energy landscape dominated by new solar energy generation, the Solar Energy Industries Association (SEIA) said in recognition of the start of the Solar+ Decade.

Tariffs on imported solar cells and modules have led to the loss of more than 62,000 U.S. jobs and $19 billion in new private sector investment.