The Case for the Solar Investment Tax Credit (ITC)

The Energy Policy Act of 2005 (P.L. 109-58) created a new 30 percent Investment Tax Credit (ITC) for commercial and residential solar energy systems that applied from Jan. 1, 2006 through Dec. 31, 2007. The ITC was extended for one additional year in December 2006 by the Tax Relief and Health Care Act of 2006 (P.L. 109-432). In its first year of implementation, the ITC spurred unprecedented growth in the U.S. solar industry and led to the doubling of installed solar electric capacity by 2007. By then, global investment in clean energy topped $100 billion, with solar energy leading all other clean energy technologies in venture capital and private equity investment.

In 2008, Congress passed legislation on a bipartisan basis that provided an eight-year extension of the commercial and residential solar ITC. It also removed a $2,000 monetary cap on the total credit that could be claimed by a homeowner installing a rooftop residential solar electric system. The bill also permitted utilities to use the credit, making solar energy more affordable for ratepayers. 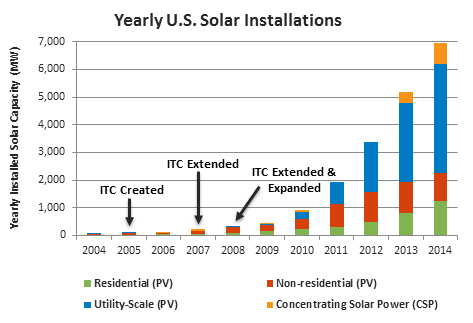 The market certainty provided by a multiple year extension of the residential and commercial solar ITC has helped annual solar installations grow by over 6,500 percent since the ITC was implemented in 2006 – a compound annual growth rate of 48 percent.

The U.S. now has more than 22,700 MW of installed solar electric capacity, and a new solar project was installed every 2.5 minutes in Q1 2015. Get more solar data.

The solar industry has grown from 17,000 employees in 2005 to nearly 174,000 today. They work at more than 8,000 companies, the vast majority being small businesses, in all 50 states. Additional job growth is expected as the industry continues to expand in the future. The ITC has a positive ripple effect to reach beyond project development to enable growth and maturation of the broader solar supply chain – including manufacturers, “mom and pop” retail stores, plumbers, electricians, distributors and salesmen in small towns and large cities across the country. As U.S. manufacturers compete with companies around the globe, the ITC is a critical policy mechanism to ensure robust demand for solar energy components in the U.S. market.

The Falling Cost of Solar for Consumers 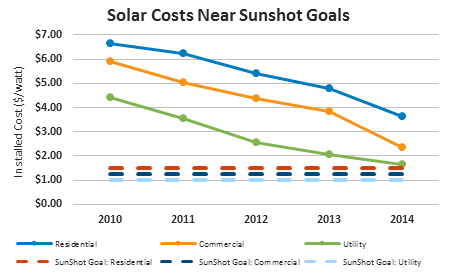 The existence of the ITC through 2016 provides market certainty for companies to develop long-term investments in manufacturing capacity that drive competition and technological innovation, which, in turn, lowers costs for consumers.

An Engine for U.S. Job Creation and Growth

Due in large part to the availability of a multi-year ITC, residential solar grew by 34 percent in 2014 over 2013, making it the fastest-growing source of renewable energy in America. Like all energy industries in the U.S. economy, stable federal policy for the solar industry allows small and large businesses to make investment and hiring decisions with confidence. This certainty ensures a greater return for taxpayers, as supply chain partners recognize long-term market opportunities and scale up manufacturing capacity. Growth in the competitive solar industry continues to drive innovation and cost reductions that lead to lower prices for consumers.

85 solar companies with operations in Arizona sent a letter to Senator Kyrsten Sinema, articulating the industry's priorities for strong clean energy policies in upcoming legislation, and the impact and potential of accelerating clean energy deployment for Arizona's economic future.