WASHINGTON, D.C. – New analysis shows that the U.S. solar industry will employ 114,000 fewer workers by June 2020, compared to previous forecasts that projected the industry would employ 302,000 Americans over the same time period. With an expected workforce of 188,000 people, this job loss will take the industry back to 2014 levels as a result of the COVID-19 crisis.

Last week the U.S. government reported another 3 million unemployment claims. The solar industry is now losing jobs at a faster rate than the U.S. economy.

The analysis from the Solar Energy Industries Association (SEIA) represents a 38% drop in solar jobs compared to previous estimates for June. The drop coincides with a 37% decrease in expected Q2 solar installations from pre-COVID forecasts, as the United States is only on track to install 3 gigawatts (GW) of new capacity in Q2 2020.

“Thousands of solar workers are being laid off each week, but with swift action from Congress, we know that solar can be a crucial part of our economic recovery,” said Abigail Ross Hopper, president and CEO of SEIA. “With a few simple changes, Congress has an opportunity to save solar jobs, rebuild our economy and advance clean energy even as policy makers address this very real public health crisis.” 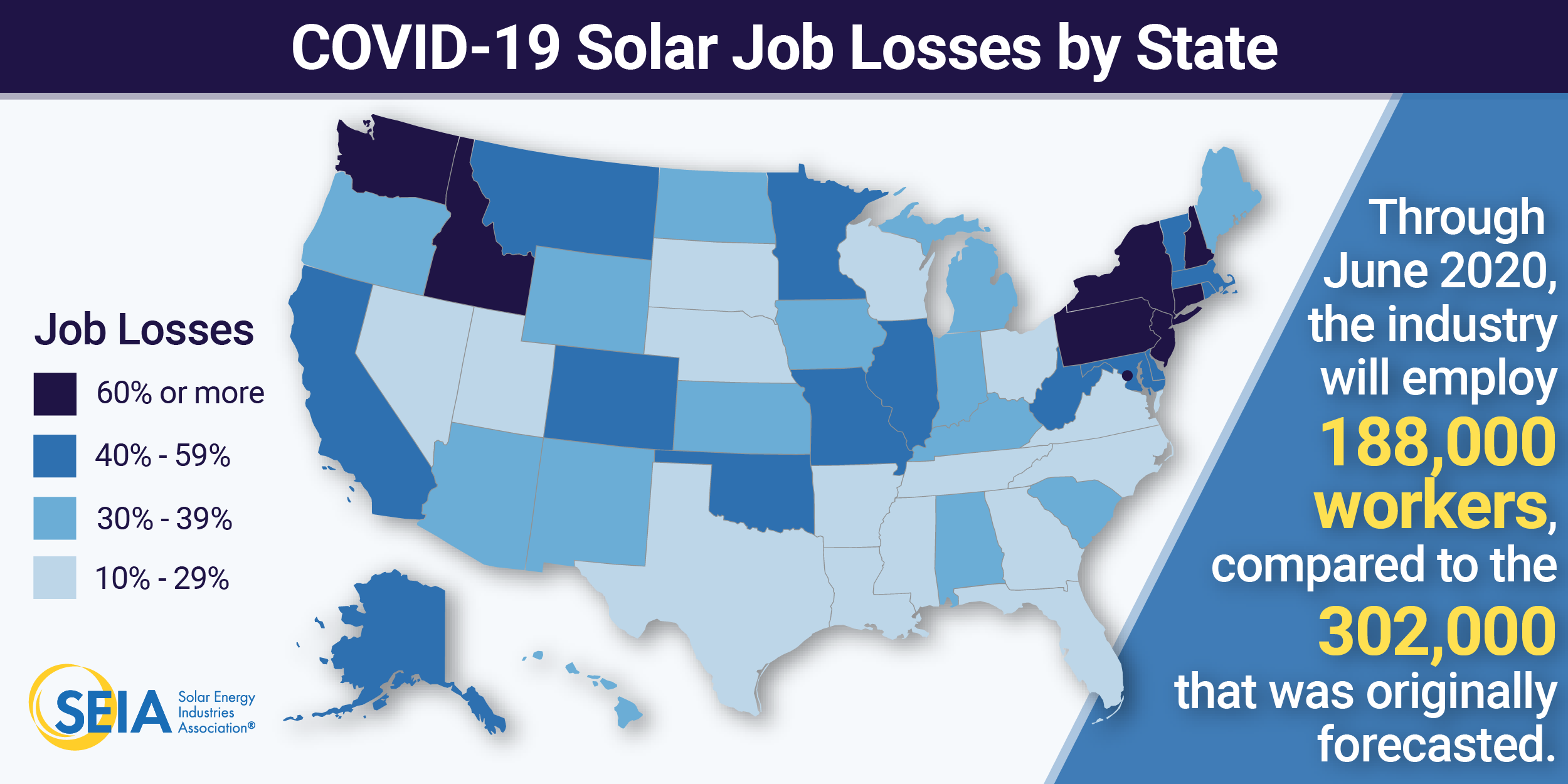 On May 13, a BW Research Partnership report based on Bureau of Labor Statistics data showed 95,600 renewable energy jobs and a total of 594,300 clean energy jobs had already been lost in March and April. SEIA’s analysis shows that vast majority of renewable energy job losses come from the solar energy industry.

The 37% decrease in new installed solar capacity is equivalent to the electricity needed to power 288,000 homes and $3.2 billion in economic investment.

Strategic government action can prevent further solar job losses, revive many of the already lost jobs, and help reinfuse billions of dollars into the U.S. economy.

The Solar Energy Industries Association® (SEIA) is leading the transformation to a clean energy economy, creating the framework for solar to achieve 20% of U.S. electricity generation by 2030. SEIA works with its 1,000 member companies and other strategic partners to fight for policies that create jobs in every community and shape fair market rules that promote competition and the growth of reliable, low-cost solar power. Founded in 1974, SEIA is a national trade association building a comprehensive vision for the Solar+ Decade through research, education and advocacy. Visit SEIA online at www.seia.org.

WASHINGTON, D.C. —   Following is a statement from SEIA president and CEO Abigail Ross Hopper on the reports of a reconciliation deal between Senator Manchin and Leader Schumer:

Today we celebrate Juneteenth, the anniversary of the freedom of Black Americans. While the United States declared that “all men are created equal” in 1776, Black Americans were enslaved until 1865 when news of emancipation spread across the nation and states not impacted by the Emancipation Proclamation ratified the 13th amendment.