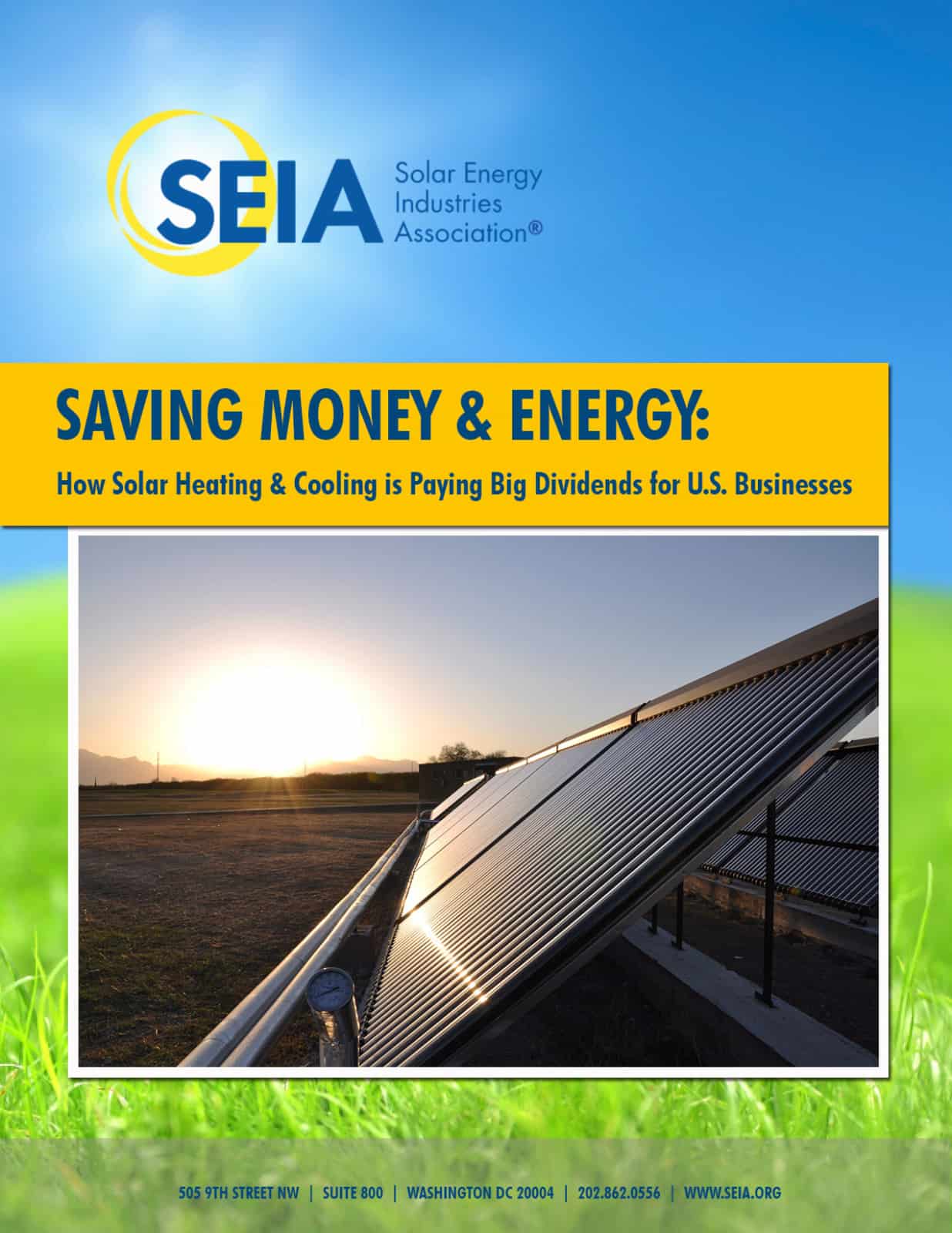 WASHINGTON, D.C. – With projected savings in some cases as high as $1.5 million, a new cost-saving report released today by the Solar Energy Industries Association (SEIA) demonstrates the many benefits achieved by utilizing innovative solar and heating cooling (SHC) systems on U.S. businesses and commercial buildings.

The first-of-its-kind report, which focused on both cost and energy savings, was conducted with the help of the U.S. Solar Heating & Cooling Alliance, a division of SEIA. Today, there are more than 1,700 companies nationwide that specialize in SHC technologies.

“From hotels to grocery stores to breweries, solar heating and cooling technology is proven to lower energy use and save money for America’s commercial buildings,” said Rhone Resch, SEIA president and CEO. “And not only can SHC improve businesses’ bottom lines, solar is a zero-emission, renewable resource that helps protect our environment. This important new study should be taken as a handbook for any commercial building owner or business with significant heating, cooling or hot water use.”

The report, “Saving Money and Energy: Solar Heating & Cooling Is Paying Big Dividends for U.S. Businesses,” details dozens of examples of SHC applications, including a system installed last year on the Duffield Regional Jail in Duffield, Virginia, that will save the county an estimated $1.5 million over the life of the project. In another example, the owner of the NOMAD Aquatic Center in Huntersville, North Carolina, told researchers his bills had reached $12,000 a month before the installation of 269 solar collectors – the estimated return on his investment (ROI) for that SHC system is just one year. At the Royal Hawaiian Hotel in Honolulu, water in guest rooms is heated with an SHC system as part of the hotel’s environmental initiatives. The 40-collector system offsets an estimated 40 metric tons of carbon emissions each year and has a four-year estimated ROI.

Given that heating and cooling are huge energy drains—representing 35 percent of energy usage in commercial buildings—the potential benefits of SHC technology, both in terms of dollars saved and carbon emissions reduced, are enormous. The Solar Heating and Cooling Roadmap, released last year, found that investment in SHC could create 50,250 new American jobs and save more than $61 billion in future energy costs through the installation of 100 million new SHC solar panels nationwide.

“Today, approximately 44 percent of all American energy consumption nationwide is attributable to heating and cooling,” said Mike Healy, SHC Alliance Chairman.  “According to projections by BEAM Engineering, ramping up the installation of SHC systems across America would allow the U.S. to generate nearly 8 percent of its total heating and cooling needs through clean, affordable solar energy.  SHC is the most efficient renewable technology for generating thermal heat and costs are as low as 6 cents per kilowatt (kWh) hour.”

About SEIA:Celebrating its 40th anniversary in 2014, the Solar Energy Industries Association® is the national trade association of the U.S. solar energy industry. Through advocacy and education, SEIA® is building a strong solar industry to power America. As the voice of the industry, SEIA works with its 1,000 member companies to champion the use of clean, affordable solar in America by expanding markets, removing market barriers, strengthening the industry and educating the public on the benefits of solar energy. Visit SEIA online at www.seia.org.