Solar Industry Lays Claim to the 2020s; Kicks Off the Solar+ Decade 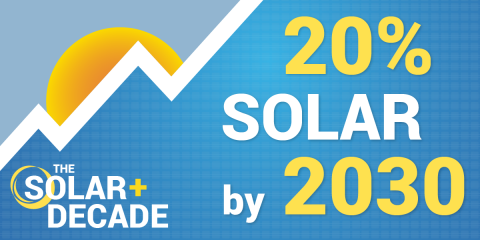 WASHINGTON, D.C. - As this decade nears a close, the Solar Energy Industries Association (SEIA) has designated the next decade The Solar+ Decade.

Constituting 2.5 percent of the nation’s electricity generation today, solar will account for 20 percent of all electricity generation by 2030, under SEIA’s aggressive target. To chart the industry’s course, SEIA is producing a roadmap to the Solar+ Decade that will lay out the policy, social, environmental and economic elements that will need to be in place to make solar a leading source of new power generation in the 2020s.

Over the next 10 years, the Solar+ Decade will be about collaboration and building the partnerships and expertise needed to overcome systemic challenges preventing the widescale adoption of solar. To achieve this goal, solar, wind and storage must work together to transform a complex and interrelated world of markets, customers and electricity systems.

“It is incumbent upon us to create a shared clean energy vision,” said Abigail Ross Hopper, SEIA’s president and CEO.  “It won’t be just the Solar Decade, but the Solar+ Decade where Solar + Storage, Solar + Grid Modernization, Solar + Wind, and Solar+ Overwhelming Public Support combine to define our nation’s clean energy future,” she said.

To meaningfully address climate change and expand the benefits that low-priced clean energy brings to the economy, solar must account for a much larger share of U.S. electricity. Increasing solar generation from 2.5 percent today to 20 percent by 2030 could add more than $345 billion into the U.S. economy and grow the workforce to 600,000 solar professionals, from nearly 250,000 today.

“The goal is bold but achievable,” Hopper said. “If we hit 20 percent solar by 2030, we will prove that solving the climate challenge won’t hurt the economy, but instead will be one of the greatest economic growth opportunities in decades,” she said.

Indeed, this effort isn’t without its challenges. To get there, the industry must reach an average annual growth rate of 18 percent and cost reductions across all market segments by nearly 50 percent. The industry will need to install an average of 39 gigawatts (GW) each year throughout the 2020s, including 77 GW in 2030 alone.

On May 15, Ms. Hopper testified before the House Science, Space, and Transportation Committee’s Subcommittee on Energy where she outlined the technical and market challenges the industry needs to overcome. These challenges and priority research areas include:

“The 2020s will be the decade where we take action and work with our partners to solve our most pressing climate problems,” said Hopper said. “The stakes have never been higher as we take our first steps into the Solar+ Decade.”

LEARN MORE ABOUT THE SOLAR+ DECADE

ATLANTA and WASHINGTON, D.C. — Today, the Georgia Public Service Commission (PSC) voted on a final order in the Georgia Power Company (GPC) rate case. The order fails to expand the successful rooftop solar pilot program that the PSC created in 2020.