This quarter’s report finds that the U.S. installed 723 megawatts (MW) in Q1 2013, which accounted for over 48 percent of all new electric capacity installed in the U.S. last quarter. Overall, these installations represent the best first quarter of any given year for the industry. In addition, the residential and utility market segments registered first-quarter highs with 164 MW and 318 MW respectively. 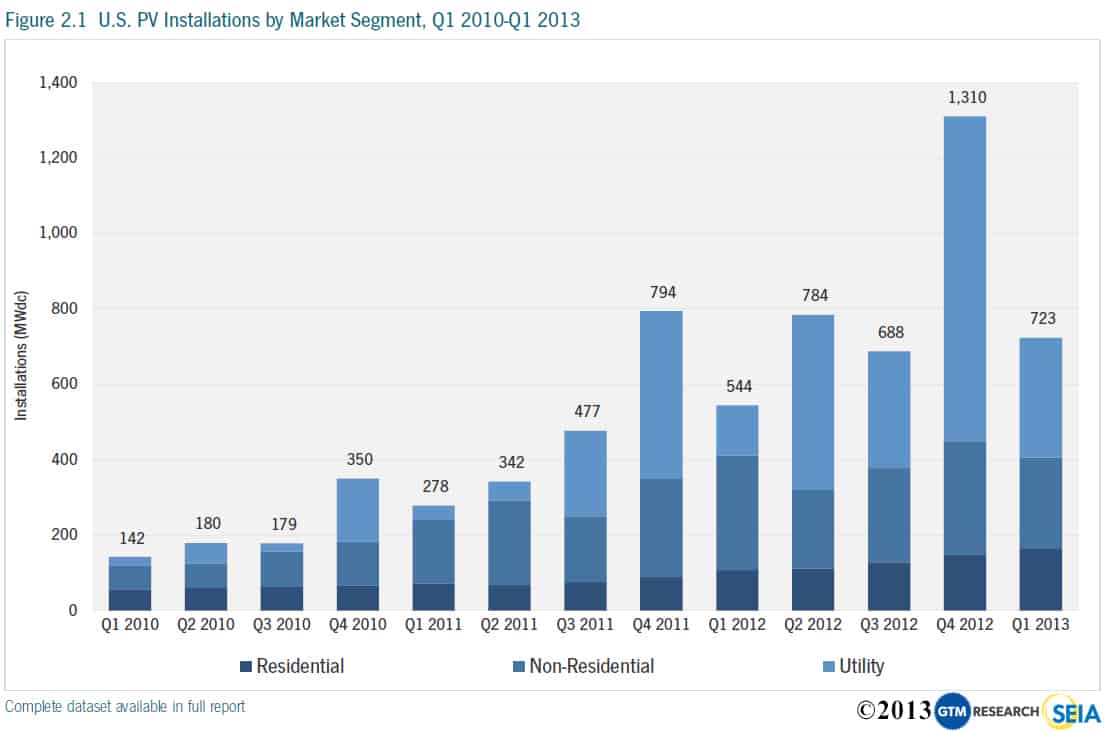 As explored in greater detail in the report, the residential market remains a highlight for U.S. solar with 53 percent year-over-year growth. Unlike the non-residential and utility markets, residential solar has not exhibited seasonality and market volatility on a national basis; quarterly growth in the U.S. residential market has ranged from 4 percent to 21 percent in 12 of the past 13 quarters.

Furthermore, third-party owned (TPO) residential systems continue to be a major storyline in the market. In key states of California and Arizona for example, TPO systems accounted for 67 percent and 86 percent respectively of all residential PV installed in Q1 2013.

In fact, the California residential market had a record quarter, installing more new PV capacity than ever before, and for the first time was greater than the non-residential market. This is largely driven by increased “retail rate” parity in major utility territories, where a residential PV system can provide a discount at retail electricity rates with few or no incentives other than the 30 percent federal investment tax credit (ITC). 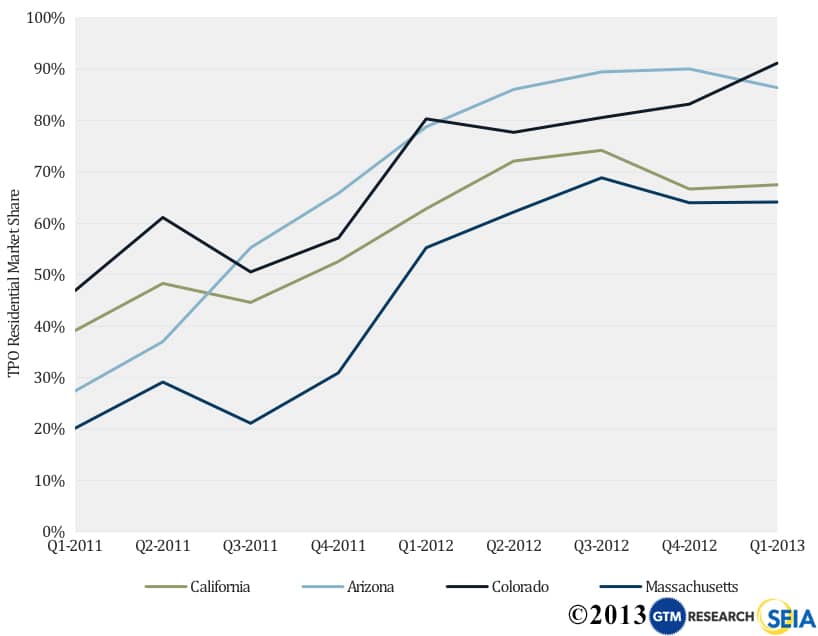 “We are on the cusp of a new solar revolution in the U.S., driven by the rapid expansion of distributed generation,” said Shayle Kann, vice president of research at GTM. “Installations will speed up over the next four years as projects become economically preferable to retail power in more locations. However, changes to net metering and electricity rate structures could serve as the market's primary barrier to adoption.”

Looking at the market on the whole, U.S. Solar Market Insight: 1st Quarter 2013 forecasts 4.4 gigawatts (GW) of PV to be installed by the end of 2013, growing to nearly 9.2 GW annually in 2016. GTM Research and SEIA® have increased each year’s forecast marginally from past editions of the report, due largely to increasingly bullish expectations for the residential market and the near-term opportunity it offers.

Despite the fact that little concentrating solar power (CSP) capacity came online during Q1 2013, CSP is also expected to make major gains by the end of the year, adding more than 900 MW of capacity. Combined, the U.S. is expected to add 5.3 GW of solar electric capacity in 2013, enough to power more than 960,000 average American homes.

“The U.S. now has more than 8,500 MW of cumulative installed solar electric capacity, enough to power more than 1.3 million American households,” said Rhone Resch, president and CEO of SEIA. “This sustained growth is enabling the solar industry to create thousands of good American jobs and to provide clean, affordable energy for more families, businesses, utilities, and the military than ever before. This growth simply would not have occurred without consistent, long-term policies that have helped to ensure a stable business environment for our nation’s 5,600 solar companies – many of them small businesses.”

About U.S. Solar Market Insight:
The U.S. Solar Market Insight: Year-in-Review 2012 report is the most detailed and timely research available on the continuing growth and opportunity in the U.S. The report includes deep analysis of solar markets, technologies and pricing, identifying the key metrics that will help solar decision-makers navigate the market's current and forecasted trajectory.