While overall growth was down from the 15 GW installed in the record-shattering 2016, last year’s capacity addition still represents 40 percent growth over 2015’s installation total.

“The solar industry delivered impressively last year despite a trade case and market adjustments,” said SEIA President and CEO Abigail Ross Hopper. “Especially encouraging is the increasing geographic diversity in states deploying solar, from the Southeast to the Midwest, that led to a double digit increase in total capacity.” 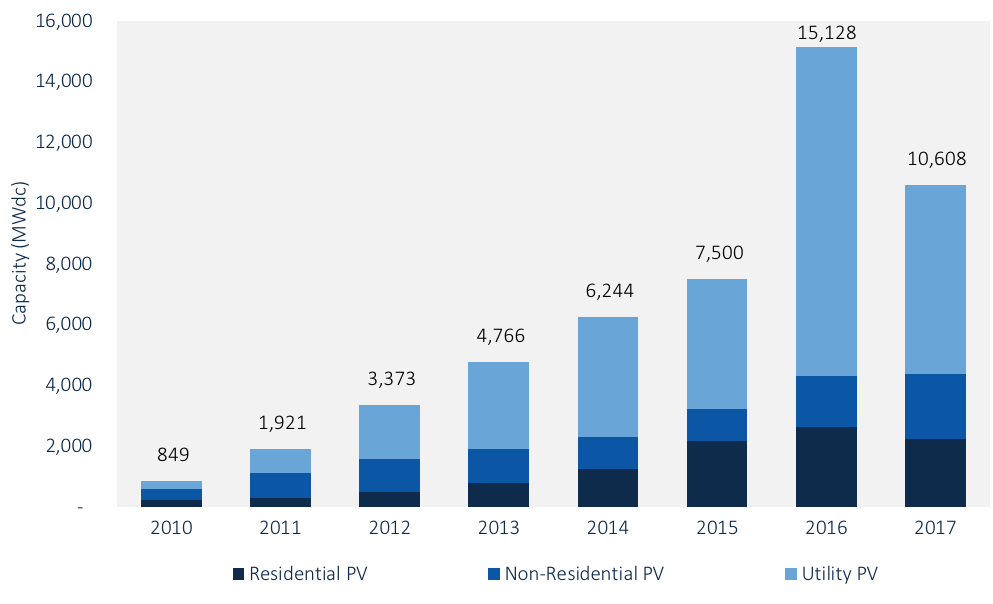 The non-residential market segment got its moment in the spotlight in 2017, growing 28 percent year-over-year, notching its fourth straight year of annual growth. Last year in particular saw an “explosion” in the community solar market, led by Minnesota and Massachusetts.

"Minnesota headlined a banner year for community solar, with more megawatts installed in that state than total U.S. community solar installations in all of 2016," said Austin Perea, GTM Research solar analyst and co-author of the report. "We expect community solar to diversify geographically in 2018, with Maryland and New York to be key growth markets for the sub-segment beginning this year."

However, the residential and utility-scale segments saw installations fall on an annual basis for the first time since GTM Research and SEIA began publishing the report in 2010.

The year-over-year downturn for the utility segment in 2017 was largely expected, due to the massive influx of installations seen in 2016 as projects were rushed to completion before the anticipated expiration of the 30 percent federal Investment Tax Credit. The report notes that uncertainty surrounding the Section 201 tariffs caused many projects to be postponed or canceled, while interconnection delays and PURPA cancellation resulted in many projects spilling over into 2018.

Of the top 10 state markets for residential solar in 2016, only two saw annual growth in 2017. However, 25 of the 44 states tracked in the report saw year-over-year growth in annual residential PV installations with several states climbing up in the rankings.

Florida managed to break into the top 10 states for the first time since 2011, jumping to the No. 10 spot for cumulative solar capacity installed. Over the last year, South Carolina also saw big gains, moving up 9 spots in the new rankings to No. 18 in the U.S.

California and North Carolina remain the two largest solar states after adding the most and second-most capacity in 2017, respectively.

Because of the federal and state policy changes and market dynamics, GTM Research lowered its base-case forecast for 2018-2022 by 13 percent. Still, total installed U.S. PV capacity is expected to more than double over the next five years, and by 2023, more than 15 GW of PV capacity will be installed annually. 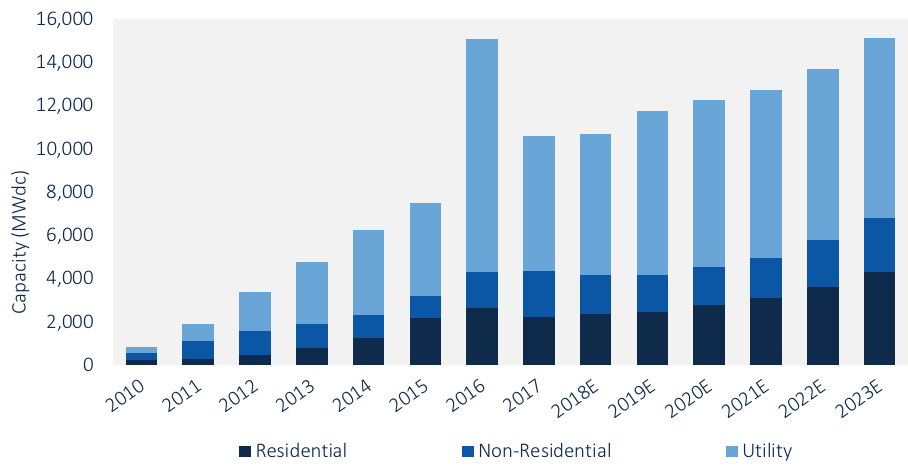 Celebrating its 44th anniversary in 2018, the Solar Energy Industries Association® is the national trade association of the U.S. solar energy industry, which now employs more than 250,000 Americans. Through advocacy and education, SEIA® is building a strong solar industry to power America.  SEIA works with its 1,000 member companies to build jobs and diversity, champion the use of cost-competitive solar in America, remove market barriers and educate the public on the benefits of solar energy. Visit SEIA online at www.seia.org.

WASHINGTON, D.C. — Solar installation forecasts for 2022 and 2023 are being cut by 46% due to the Biden administration’s circumvention case against solar imports from Southeast Asia.

BOSTON, Mass. and WASHINGTON D.C.  – In 2017, the U.S. solar market expanded, adding double-digit gigawatt solar photovoltaic (PV) additions for the second year in a row. According to the newly released U.S.