BOSTON, Mass. and WASHINGTON, D.C. - Following rapid growth across the industry in 2016, the United States solar market added 2,044 megawatts of new capacity in the first quarter of 2017. As installations grow, prices continue to fall to new lows, with utility-scale system prices dropping below the $1 per watt barrier for the first time, according to GTM Research and the Solar Energy Industries Association’s (SEIA) latest U.S. Solar Market Insight Report.

Q1 was the sixth straight quarter in which more than two gigawatts of solar photovoltaics (PV) and more than one gigawatt of utility-scale PV was installed.

The residential and non-residential PV markets are both expected to experience year-over-year growth, even as the quarterly numbers saw a drop from last year’s record-setting pace, the report said.

“The solar market clearly remains on a strong upward trajectory,” said Abigail Ross Hopper, SEIA’s president and CEO. “Solar is delivering more clean energy, adding jobs 17 times faster than the U.S. economy and creating tens of billions of dollars in investment. With its cost-competitiveness, we know solar will continue to play a growing role in America’s energy portfolio.”

The utility-scale segment continues to drive the market, representing more than half of all PV installed during the quarter. Much of the capacity comes from projects that were originally slated for completion in 2016, but ended up being pushed back due to the extension of the federal Investment Tax Credit. And this entire year is expected to benefit from those “spill-over” projects.

“Utility solar is on the cusp of another boom in procurement,” said Cory Honeyman, GTM Research’s associate director of U.S. solar. “The majority of utility solicitations are focused on maximizing the number of projects that can come online with a 30 percent federal Investment Tax Credit in 2019, or later by leveraging commence construction rules.” 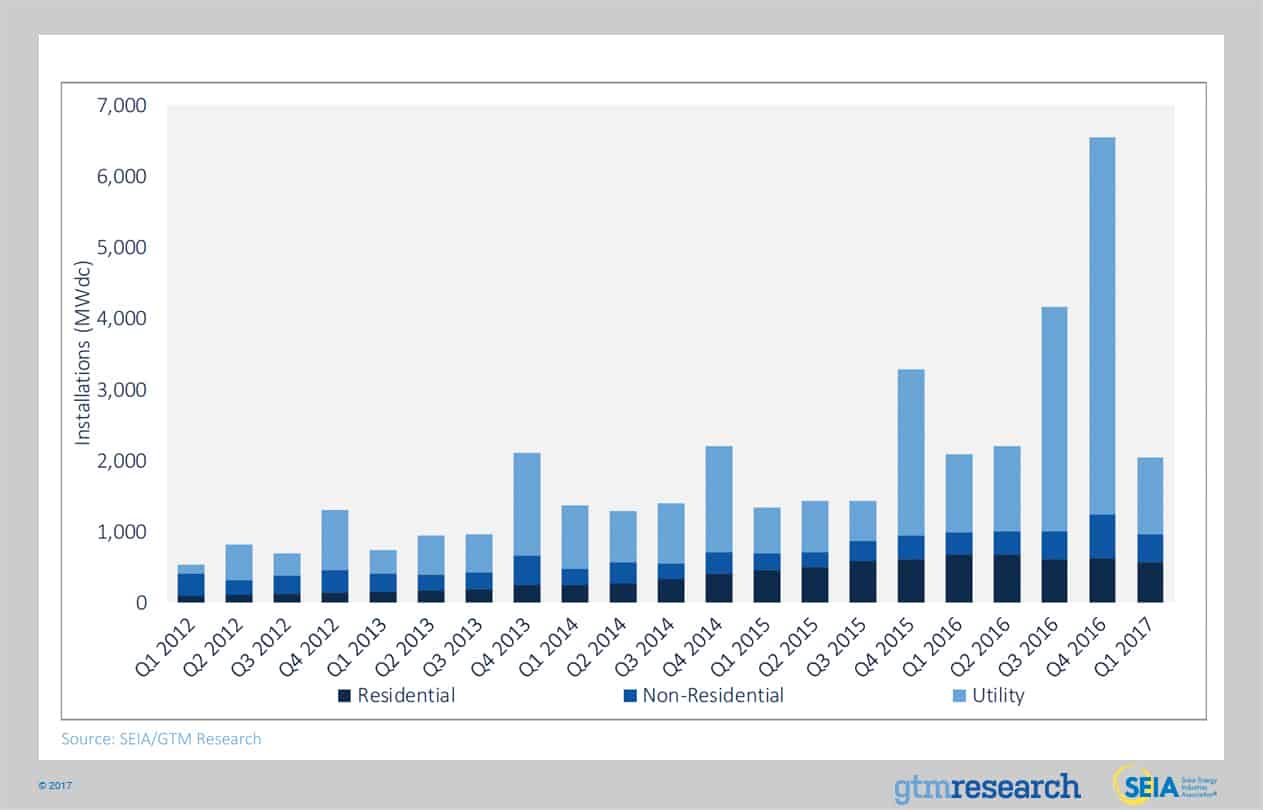 The non-residential solar market—which includes commercial, industrial and community solar installations—grew 29 percent year-over-year, but was down 39 percent from a record high fourth quarter 2016.

Several other states not as well known for their solar markets saw particularly large jumps in installations this quarter, including Idaho and Indiana. Meanwhile, emerging state markets such as Utah, Texas and South Carolina continued their growth.

More than a half-gigawatt of residential PV was installed in the quarter, down 17 percent from the first quarter of last year. Part of the slowdown can be attributed to national installers pulling back operations in unprofitable geographies and customer acquisition challenges in more mature residential state markets like California. 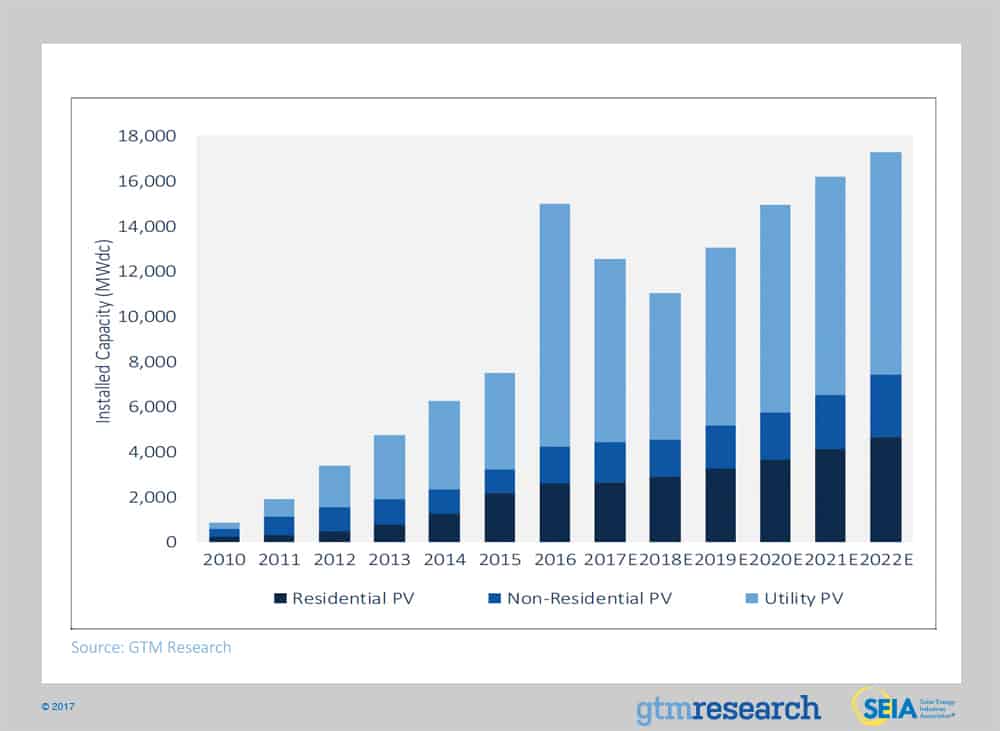 However, downside risk looms over the long-term outlook for U.S. solar, due to a new trade dispute initiated by Suniva.

According to the report, if Suniva’s petition for a minimum silicon PV module price of 78 cents per watt is successful, it could raise system costs between 13 and 35 percent, depending on segment. While it remains unclear how the International Trade Commission will ultimately rule on this petition by Suniva, the approval of the petition as initially filed would result in substantial downside revisions to the GTM Research forecast across all three segments.

Key findings from the report

Celebrating its 43rd anniversary in 2017, the Solar Energy Industries Association® is the national trade association of the U.S. solar energy industry, which now employs more than 260,000 Americans. Through advocacy and education, SEIA® is building a strong solar industry to power America.  SEIA works with its 1,000 member companies to build jobs and diversity, champion the use of cost-competitive solar in America, remove market barriers and educate the public on the benefits of solar energy. Visit SEIA online at www.seia.org.