BOSTON, Mass. and WASHINGTON, D.C. - The U.S. solar market continued its years-long expansion in the second quarter of 2017 as the industry installed 2,387 megawatts (MW) of solar photovoltaics (PV), the largest total in a second quarter to date. This tops Q1’s total and represents an 8 percent year-over-year gain, GTM Research and the Solar Energy Industries Association (SEIA) said in the latest U.S. Solar Market Insight Report.

“This report shows once again that solar is on the rise and will continue to add to its share of electricity generation,” said Abigail Ross Hopper, SEIA’s president and CEO. “Last year, solar companies added jobs 17 times faster than the rest of the economy and increased our GDP by billions of dollars. We are going to continue to fight for policies that allow the industry to continue this phenomenal growth.” 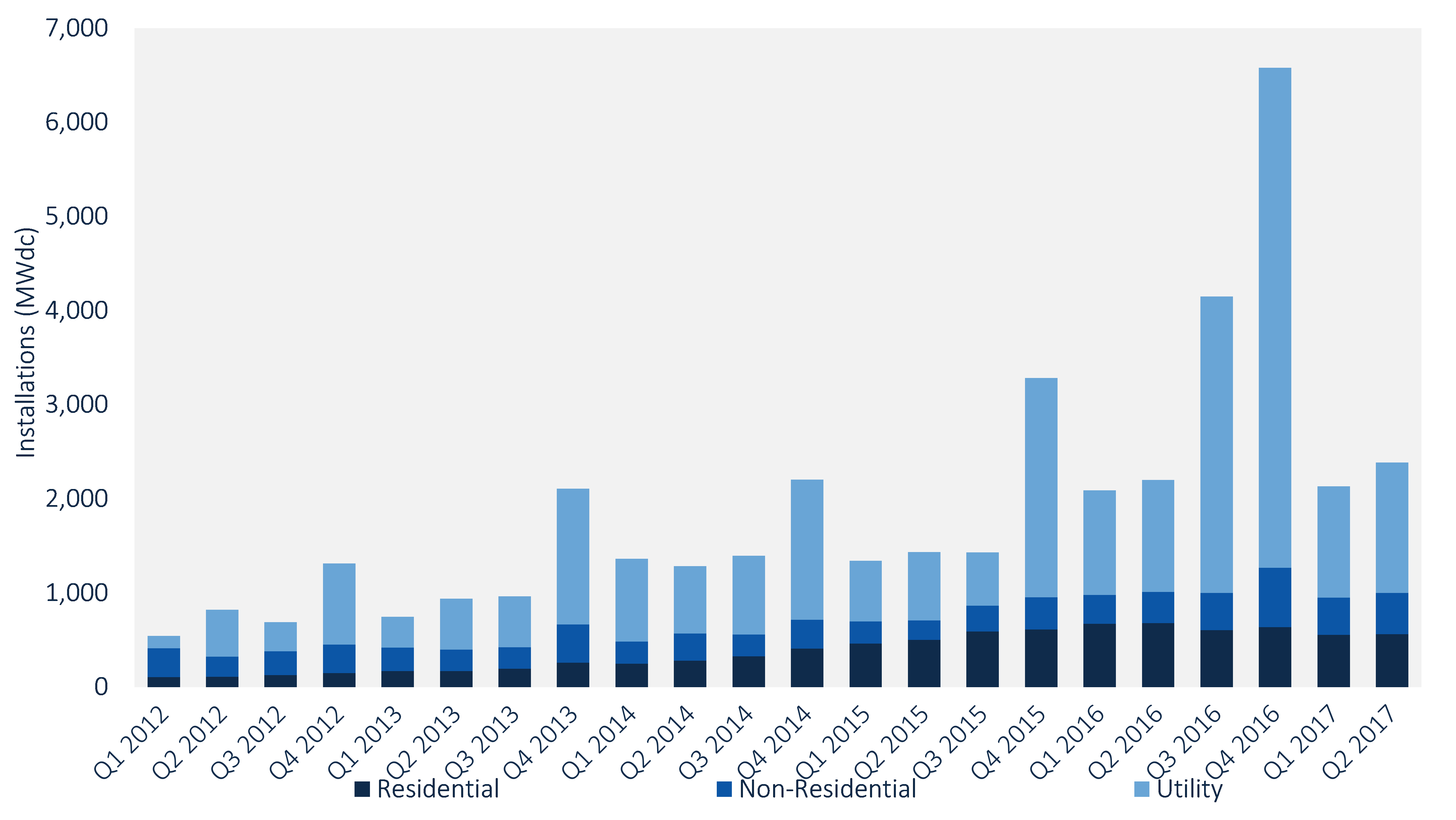 The non-residential market grew a robust 31 percent year-over-year, with 437 MW installed. That was driven in large part by favorable time-of-use rates in California, expiring incentives in Massachusetts, and a record-breaking quarter in New York, where a number of remote, net metered projects were completed.

Joining those states in the top 10 for additions in Q2 were long-time solar leaders such as Arizona, Nevada and North Carolina, as well as surprises like Minnesota and Mississippi, which had the 5th and 9th largest markets in the quarter, respectively. Texas, which is projected to be the second largest state solar market over the next five years, had its strongest quarter ever, adding 378 MW in Q2, placing it 2nd among states this quarter.

The utility-scale segment represented 58 percent of the PV capacity installed in the quarter. In fact, Q2 marked the seventh straight quarter in which the U.S. added more than a gigawatt (GW) of utility-scale solar.

According to the report, 563 MW of residential solar PV was installed in the U.S. in the second quarter of the year. While this is a slight uptick over the first quarter, it represents a 17 percent decline year-over-year.

“Slowdown in residential solar is largely a function of national installers scaling back operations in major state markets as they prioritize profitability over growth,” explained GTM Research Solar Analyst Austin Perea. “While California was the first major market to exhibit signs of slow-down in Q1, many major Northeast markets began to feel the impact of national installer pull-back in Q2 despite a stable policy environment and strong market fundamentals."

The report forecast that the solar industry will add 12.4 GW of new capacity this year, down slightly from GTM Research’s previous forecast of 12.6 GW.

The report did not change its forecast that the American solar industry would triple cumulative capacity over the next five years.

However, trade relief, which is being considered by the U.S. International Trade Commission, could radically affect the solar outlook and “would result in a substantial downside revision to our forecast for all three segments,” the analysis said.

In a June report, GTM Research said that the requested floor price, if approved, would cut cumulative demand in half over the next five years. SEIA says the petition could cause the solar industry to shed 88,000 jobs just in 2018. Last year, U.S. solar companies added 51,000 workers.

Celebrating its 43rd anniversary in 2017, the Solar Energy Industries Association® is the national trade association of the U.S. solar energy industry, which now employs more than 260,000 Americans. Through advocacy and education, SEIA® is building a strong solar industry to power America.  SEIA works with its 1,000 member companies to build jobs and diversity, champion the use of cost-competitive solar in America, remove market barriers and educate the public on the benefits of solar energy. Visit SEIA online at www.seia.org.