BOSTON, Mass. and WASHINGTON, D.C. - Showing resiliency in spite of the new tariffs on imported modules, the U.S. solar market added 2.5 gigawatts of solar PV in the first quarter of the year, representing annual growth of 13 percent, according to the latest U.S. Solar Market Insight Report from GTM Research and the Solar Energy Industries Association (SEIA).

Solar PV accounted for 55 percent of all U.S. electricity capacity added during the quarter and added more than two gigawatts for the 10th straight quarter, the study said. 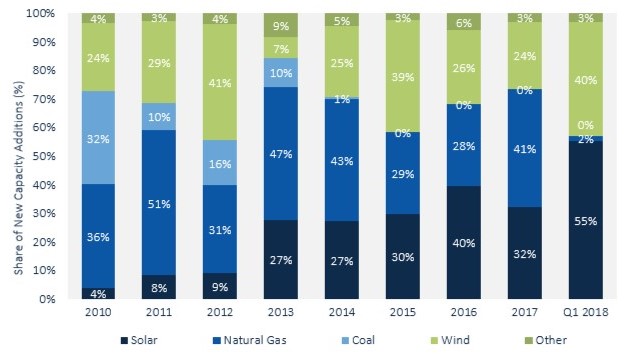 “The solar industry had a strong showing in the first quarter,” said SEIA President and CEO Abigail Ross Hopper. “This data shows that solar has become a common-sense option for much of the U.S. and is too strong to be set back for long, even in light of the tariffs. States from California to Florida have stepped up with smart policies that will drive investment for years to come.”

According to the report, the solar industry installed 1.4 gigawatts of utility-scale PV in Q1, the 10th consecutive gigawatt-scale quarter for the U.S.’s largest solar market segment.

GTM Research said utility-scale solar projects thus far have been relatively insulated from tariffs but analysts expect the tariffs to have a bigger impact on the segment in 2019. However, they forecast growth for the market. The report increased the forecast for utility-scale solar to 6.6 GW in 2018. That’s slightly higher than the 6.47 GW predicted in March.

“This is a promising indicator that constraints to residential PV growth like segment-wide customer acquisition challenges and national installer pullback are abating,” GTM Senior Analyst Austin Perea said. “However, these problems are not entirely solved, as we’re seeing slowdowns in states with a relatively high penetration of PV installations.”

The report notes that three of the top five residential solar markets in 2017 — Maryland, New Jersey, and New York — are expected to contract in 2018 for a second consecutive year as a function of the persistent customer-acquisition challenges. “The decline in some major state markets will be offset by growth in emerging markets,” Perea said.

GTM Research and SEIA highlighted Florida as a standout state in this quarter's edition of the report. Florida added more solar than it did in all of 2016, the second most capacity after California and the first time ever that it was ranked among the top 5 for quarterly installations.

GTM Research anticipates the U.S. market in aggregate will be flat this year. The U.S. market can again expect to see growth exceeding 10 percent in the early 2020s, driven in part by California’s recently announced policy requiring solar on all new homes. The report forecasts that within five years, California’s new home solar market alone will be larger than the No. 2 state residential solar market, New Jersey, by 100 MW. By 2023, more than 14 GW of solar will be installed annually.

Celebrating its 44th anniversary in 2018, the Solar Energy Industries Association® is the national trade association of the U.S. solar energy industry, which now employs more than 250,000 Americans. Through advocacy and education, SEIA® is building a strong solar industry to power America. SEIA works with its 1,000 member companies to build jobs and diversity, champion the use of cost-competitive solar in America, remove market barriers and educate the public on the benefits of solar energy. Visit SEIA online at www.seia.org.

Yesterday the Solar Energy Industries Association (SEIA) filed comments in response to the Federal Energy Regulatory Commission’s (FERC’s) Notice of Proposed Rulemaking (NOPR) on transmission reforms that will meet the needs of a rapidly changing energy mix and better consider the systemwide benefits of transmission assets.

Today the Solar Energy Industries Association (SEIA) is urging banking regulators to expand the use of the Community Reinvestment Act (CRA) to include financing support for solar and storage projects of all sizes.

Safer, Faster, Cheaper: How SolarAPP+ Is Cutting Through Bureaucracy to Boost Solar Deployment