Trade case, tight global supply of modules drive up prices in all segments

BOSTON Mass. and WASHINGTON, D.C. - The U.S. installed more than 2 gigawatts (GW) of solar photovoltaics (PV) in the third quarter of 2017, despite experiencing higher prices across all market segments and major policy uncertainty.

In their latest U.S. Solar Market Insight report, GTM Research and the Solar Energy Industries Association (SEIA) said prices rose due to a tight global supply of modules and uncertainty around the Section 201 trade case now being weighed at the White House.

In all, 2,031 megawatts (MW) of PV were installed in the U.S. in the third quarter of the year, the eighth consecutive quarter that the solar industry added more than 2 GW. The capacity additions represent a 51 percent drop year over year. The cumulative YTD comparison puts the industry down 22 percent compared to this point last year- which is in line with the expected 21% decline for all of 2016 vs all of 2017.

GTM Research forecasts that 11.8 GWdc of new PV installations will come on-line in 2017, down 22% from a record-breaking 2016. The forecast has been adjusted downward from 12.4 GW last quarter to reflect continued challenges in the residential market and a push back in utility-scale completion timelines due to uncertainties surrounding the trade case.

“The solar industry is a resilient bunch, but this quarter shows us what happens when policy uncertainty becomes a disruptive factor: prices rise, supplies shift and the market reacts accordingly,” said Abigail Ross Hopper, SEIA’s president and CEO. “We urge President Trump to reject tariffs and allow solar to continue its amazing growth for the U.S. economy, national security and American families in all 50 states.” 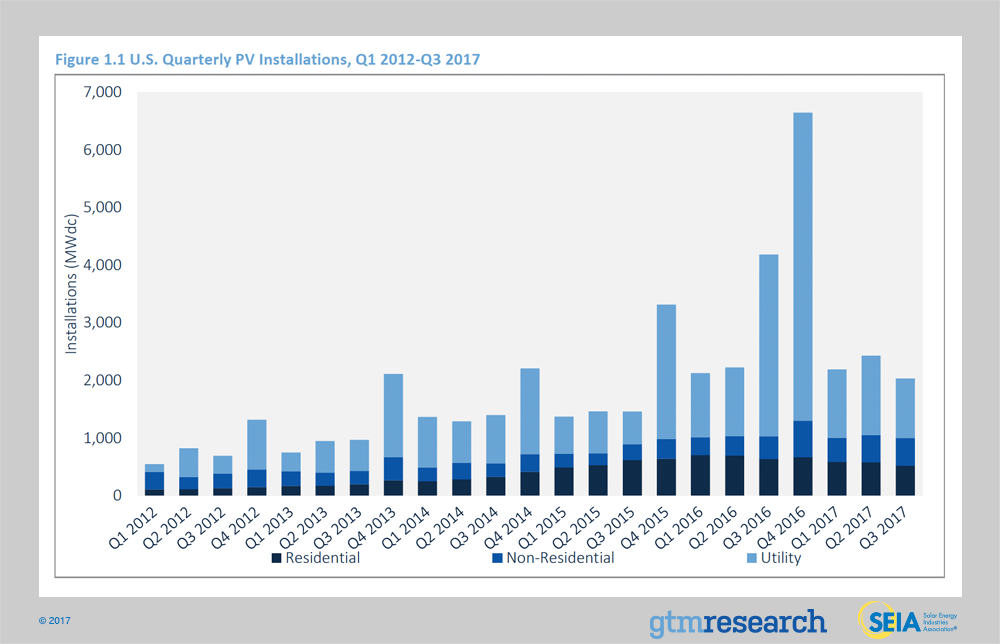 Utility-scale projects accounted for 51 percent of the quarter’s installed capacity, but it was the non-residential market that was the standout.

California, Massachusetts and New York all posted strong quarters while Minnesota had its largest quarter ever due to its robust community solar program. Nationwide, community solar capacity is on track to grow by more than 50 percent year-over-year.

The utility-scale segment was led by Nevada, North Carolina and Texas. In fact, Texas installed more solar in the third quarter of this year than the state installed in the entirety of 2015. Meanwhile, emerging markets in the Southeast, including Florida, Mississippi, and South Carolina all had strong quarters and are forecast to install more solar in 2017 than any year previously.

The report says 4 GW of utility-scale PV projects are currently under construction across the nation and GTM Research forecasts an additional 3.9 GW will come on-line by the end of the year. This would make 2017 the second largest year ever for solar installations behind only the record-shattering 2016. 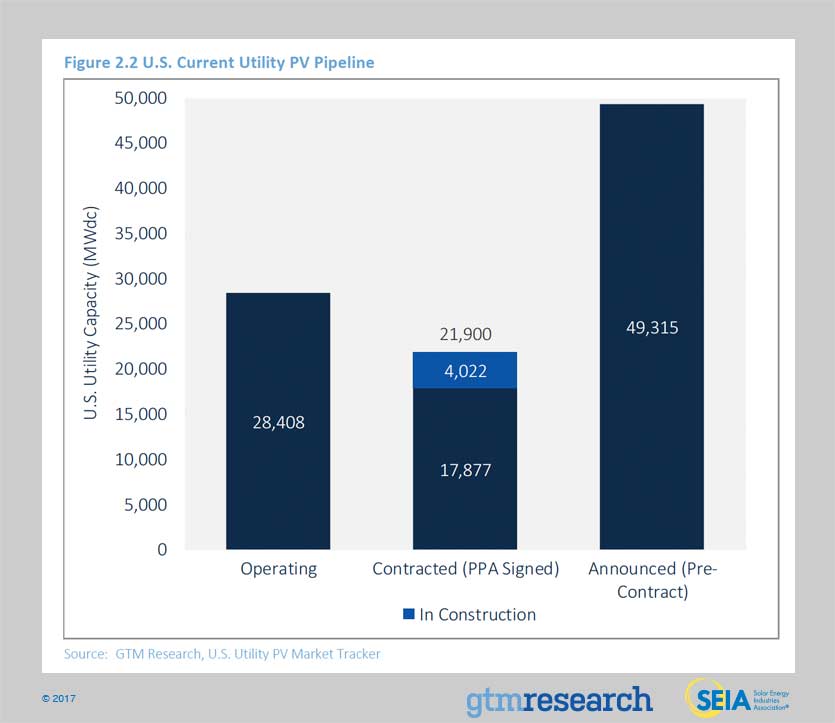 Despite more than half of U.S states now being at grid parity — meaning the levelized cost of energy is below electricity bill savings in year 1 of system life — the U.S. residential segment posted its lowest solar installation total since the first quarter of 2015.

The report attributes the slowdown to two key factors: persistent nationwide customer acquisition challenges and a pivot by major solar installers that are pursuing profitable sales channels over growth. This has been particularly acute in mature markets that account for the majority of installation volumes.

Several markets, however, experienced record quarters for the residential solar segment. These include New Mexico, Washington D.C., Virginia and Idaho. Meanwhile, emerging markets, such as Florida and Pennsylvania, are expected to surpass 50 MW of residential capacity for the first time ever this year.

"The year 2017 has been unconventional for solar in the sense that utility and residential PV, which have historically been the market’s major growth segments, are actually expected to decline in 2017,” said GTM Research Solar Analyst Austin Perea. “For utility PV this is largely a function of comparing the record-breaking ITC demand-pull in effect of 2016 to more modest build-out in 2017, while significant customer acquisition issues remain a challenge for residential solar. Conversely, non-residential solar, the smallest and most historically beleaguered sector, is expected to grow in 2017 in large part due to robust community solar build-out and regulatory demand pull-in across major state markets."

Looking forward to 2018 and beyond, both Section 201 remedies and corporate tax reform present considerable downside risk to the industry’s base-case forecasts. However, at present, neither issue will be incorporated into GTM Research’s existing outlook until President Trump issues a formal decision on Section 201 trade remedies and the U.S. Congress votes on corporate tax reform legislation.

Celebrating its 43rd anniversary in 2017, the Solar Energy Industries Association® is the national trade association of the U.S. solar energy industry, which now employs more than 260,000 Americans. Through advocacy and education, SEIA® is building a strong solar industry to power America. SEIA works with its 1,000 member companies to build jobs and diversity, champion the use of cost-competitive solar in America, remove market barriers and educate the public on the benefits of solar energy. Visit SEIA online at www.seia.org.

WASHINGTON, D.C. and HOUSTON, TX —Supply chain constraints are leading to price increases across every solar market segment, despite the addition of 5.7 gigawatts (GWdc) of solar capacity in Q2 2021, according to the U.S. Solar Market Insight report released today by the Solar Energy Industries Association (SEIA) and Wood Mackenzie, a Verisk business (Nasdaq: VRSK).