From September 4 to 9, 2012, Hart Research undertook an online national survey of 1,206 registered voters on behalf of SEIA, including an oversample of swing voters (resulting in 762 swing voter interviews).  The swing voter sample included only those respondents who did not indicate a strong or consistent partisan voting history.  The margin of error for the full sample is ±2.8 percentage points.

On a broad range of core measures, voters consistently express a strongly favorable view of solar energy.  These positive perceptions extend to support for government policies that encourage the development and expansion of solar energy use in the United States.

9 of 10 voters (92%) believe it is important for the United States to develop and use solar power. 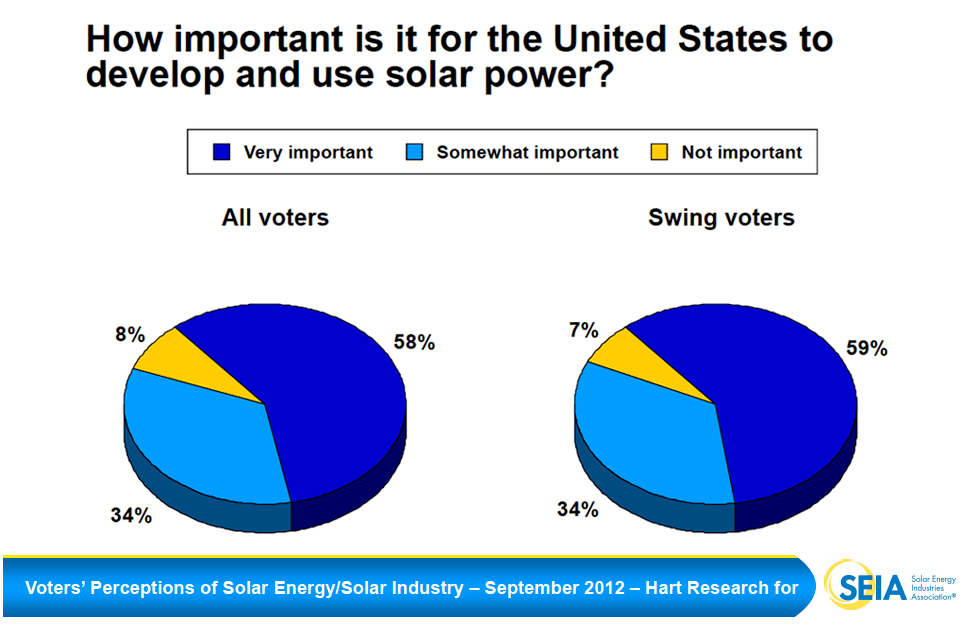 A nearly unanimous 92% of voters feel it is very important (58%) or somewhat important (34%) for the United States to develop and use solar power, including 93% of swing voters.  Democrats and independents are nearly uniform in their agreement (98% and 95% important, respectively), and 84% of Republicans also agree.

Energy is an important issue for voters as they head toward the final stretch of the 2012 campaign.

With a wide range of electoral issues on the table, issues related to energy are important to American voters, with 74% saying that energy is one of the most important (27%) or very important (47%) issues as they think about the candidates for president and other federal and state offices this year.  For context, this is ahead of the environment (55%) and slightly behind government spending (90%), Medicare reform (81%), and education (80%).  This is true for swing voters (72% say energy is most or very important), Democrats (79%), Republicans (67%), and independents (75%).

Voters have a strongly favorable view of solar energy. 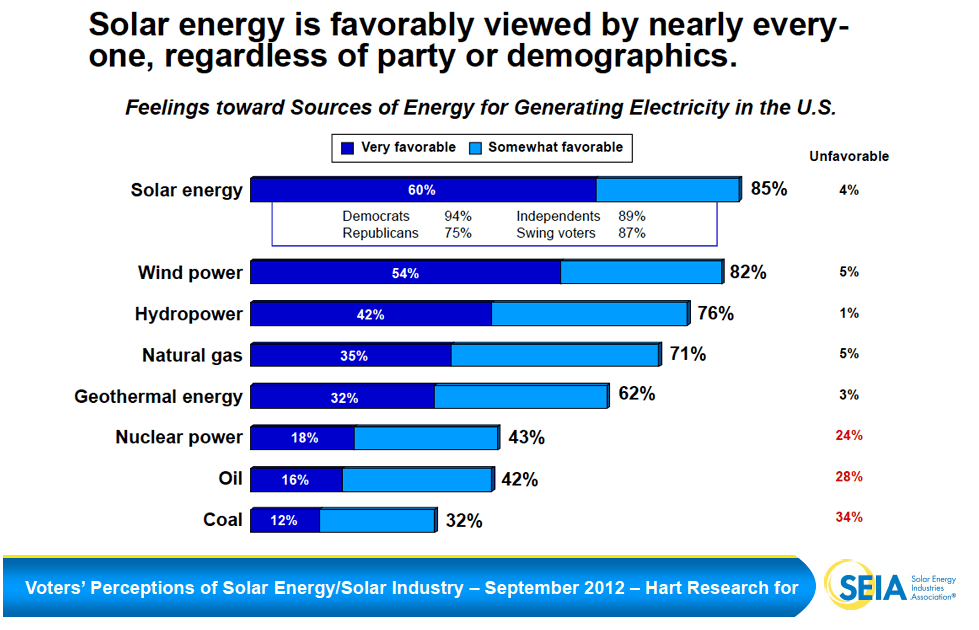 Of all the sources of energy that government can and should support, voters put solar at the top of the list.

Voters identify solar as the energy source they are most eager to have the federal government and U.S. policy support through tax credits and financial incentives.  In fact, when presented with eight different forms of energy that the federal government should encourage (in addition to the option of saying none), 64% of voters, including 67% of swing voters, say that solar should be on that list (the next highest is wind power at 57%). 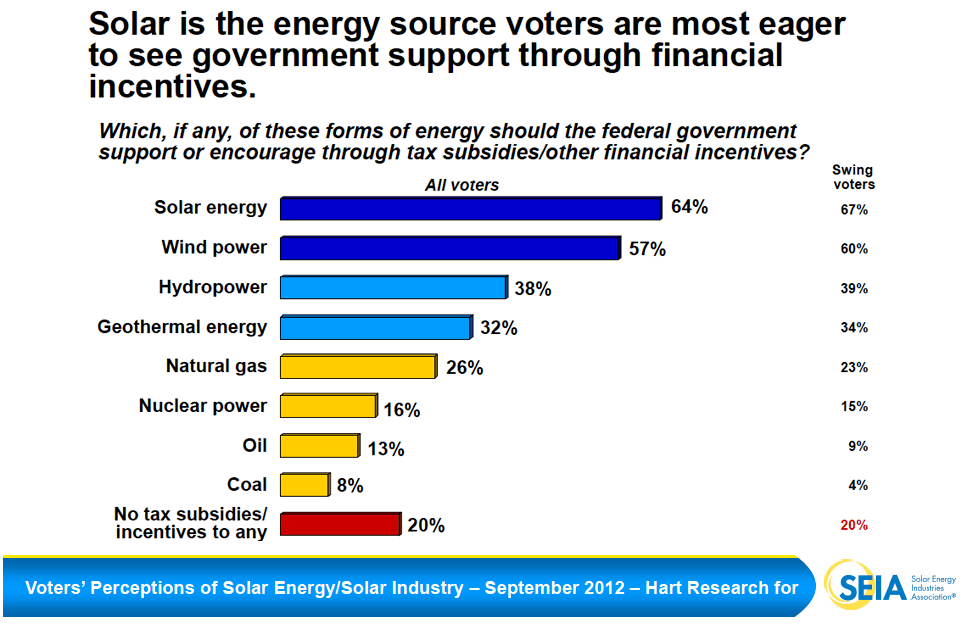 Voters are enthusiastic about the federal government doing more to promote solar energy.

Voters express broad agreement that solar development is an appropriate and desired investment for government, with a strong majority of voters saying the federal government should be doing MORE than it currently is to promote solar power.  Fully seven in 10 (70%) voters, including 72% of swing voters, say the federal government should be doing more (16% favor continuing its current policies and 14% prefer to see the government doing less).  This mirrors the 69% of all voters (and 71% of swing voters) who say the government is currently not doing enough to promote solar power.  This consensus holds up across age, education, and racial boundaries.

Voters’ favorable views of solar energy translate into support for government policies that will facilitate solar power development and expansion through financial incentives—this support holds up across party lines. 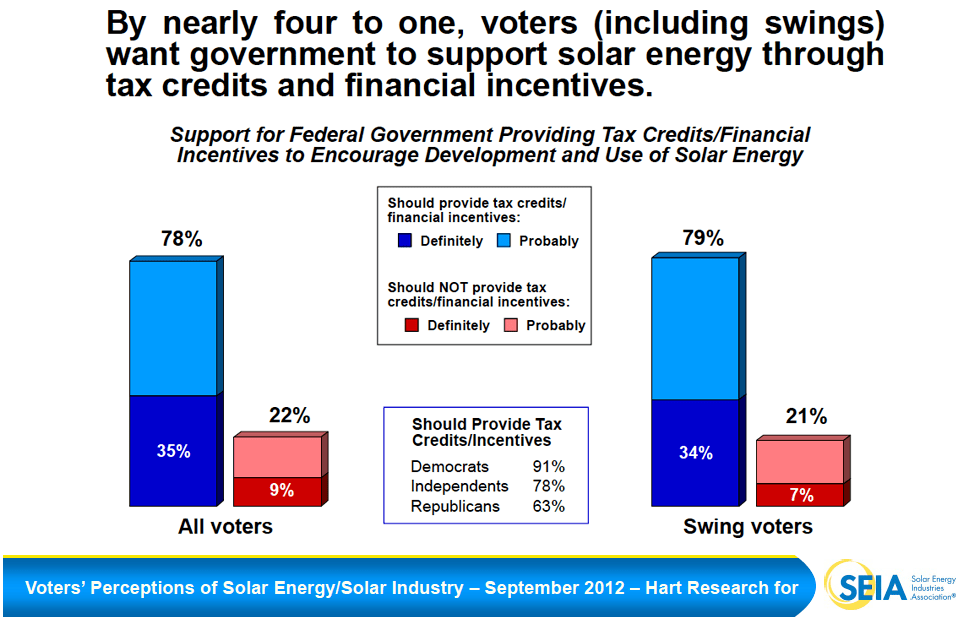 While strongly supportive of policies to develop solar power, voters express uncertainty about some elements of solar.  For example, a majority (66%) of voters agree that “solar power is too expensive for most consumers” (though just 22% say it definitely is true) and 54% say the same about “solar power is not practical in many areas of the country” (just 11% say definitely true).  Communicating the increased affordability and efficiency of solar power is critical in addressing these concerns.