The Climate Group and the Solar Energy Industries Association (SEIA) announce their partnership to create a campaign through Facebook to accelerate the rate of US residential solar adoption. The main component of the campaign is a web app where solar owners can access a badge to display their solar ownership on Facebook. In return, they permit us to us to include their Facebook profile in our solar owner database to share with people interested in solar power.

The “I LIKE SOLAR” initiative centers around solar energy’s widespread popular appeal – demonstrated by a recent national Hart poll which shows that 9 out of 10 Americans favor more solar deployment – as well as the power of social media to spread the “buzz” about solar energy. In fact, researchers at the University of Texas, Austin found that interaction with a friend, relative or neighbor with solar can spur someone to “go solar” three times faster.

The goals of the campaign are to:

1/2 OF ALL U.S. FACEBOOK USERS CONNECTED TO SOMEONE WITH SOLAR

10% DECREASE IN LOST LEADS VS. BUSINESS AS USUAL

According to the SEIA/GTM Solar Market Insight Year in Review 2013, the US currently has a total of 12.1 gigawatts (GW) of solar PV generating capacity installed. Last year PV installations increased 41% over 2012 to reach 4.8 GW last year to bring the total number of US solar installations to 445,000. SEIA projects a further 5.2 GW of new installations for this year across residential, commercial and utility sectors.

Facebook’s 180 million-person US user base presents an exciting opportunity to accelerate even further the adoption of rooftop solar installations. Social networks are widely understood to play a key role in the diffusion of new technologies by helping to propagate awareness and acceptance of new products and services.

We believe that we will be able to recreate the impact of seeing solar in the neighborhood to the online community.

Once we designed the web app and created a database of solar customers, we wanted to test whether or not solar customers would participate in a campaign like this. SEIA and The Climate Group worked with two solar companies and tested messaging and the web app with a segment of their customers.

Each customer received an email and/or targeted Facebook ads introducing the campaign. They were asked to “solarize” their Facebook profile pictures and cover image by adding a sun and banner to the images to show their solidarity with solar. They were also encouraged to share their “solar stories” with friends and friends of friends through Facebook. 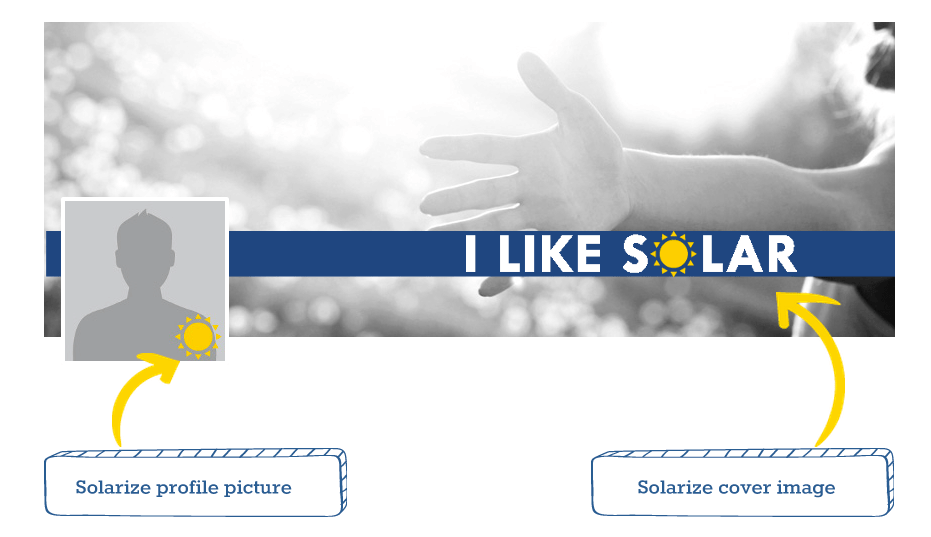 Over a 2 week period, we refined the design and messaging of the campaign, achieving a 3% sign up rate with positive initial feedback that indicates the app’s success in engaging solar owners to acknowledge and share their solar experience.  This leads us to believe that achieving 10-20% sign up rates is achievable over a 6 month period.

The next step in I LIKE SOLAR is a six-month campaign to expand the reach of the campaign and the number of signed-up solar owners. The goal is to get at least 50,000 users--or 5% of solar home residents--to sign up to show their friends and friends-of-friends they have solar.

Central to these efforts is expanding development of the web app and developing the I LIKE SOLAR Friend Finder widget. We plan to add details about the individual’s solar installation to the cover image, provide additional stories to tell in the share your story section, and optimize the site for user engagement.

The Friend Finder widget will enable prospective solar owners to find existing owners in their social networks and learn first-hand about their experience through friends, and friends-of-friends, who have solar. Through this widget, any solar owner who has signed up on ilikesolar.org will show up in the face pile if one of their friends lands on that solar company’s website. By displaying a friend and providing a way to communicate with them, we think this widget will decrease lost leads by 10%.

An important element for the campaign’s design and communication will be to identify ambitious but achievable targets through collaboration between SEIA, The Climate Group, Facebook and a coalition of commercial solar users and solar companies.

Our partnerships with solar companies will allow us to reach solar customers directly. They will be asked to email and advertise to their customers inviting them to solarize their Facebook profile and join the project. In return, these companies will be able to align themselves with an innovative project and be asked to contribute to the development of the campaign.

Our partnerships with corporate sponsors who are leading consumer brands and also major users of solar power could generate added momentum to the campaign. This could include offers or incentives for solar customers and cross-promotion in being identified as leaders adopting renewable, low carbon energy.

I LIKE SOLAR will foster a robust community of solar owners to share their stories and connect people who want solar with those who have solar through Facebook. This campaign has the potential to transform the rate of solar uptake by consumers in the US and provide immense marketing potential for solar installers and manufacturers leading the way in residential solar utilization and pushing forward a low carbon economy.

The Climate Group is an award-winning, international non-profit. Our goal is a high-growth, low carbon future. Our vision is a prosperous, low carbon future for all. Our mission is to inspire and convince leaders at the top of government, business and society to reduce carbon emissions now and accelerate the transition to a low carbon economy.

We believe this will be achieved through a ‘clean revolution’: the rapid adoption of commercially viable clean energy and technology. We work with corporate and sub-national government partners to develop climate finance mechanisms, business models which promote innovation, and supportive policy frameworks. We convene leaders, share hard evidence of successful low carbon growth, and pilot practical solutions which can be replicated worldwide.  Our offices are in Greater China, North America, India and the EU.

Established in 1974, the Solar Energy Industries Association (SEIA) is the national trade association of the U.S. solar energy industry. Through advocacy and education, SEIA is building a strong solar industry to power America.

As the voice of the industry, SEIA works with its member companies to make solar a mainstream and significant energy source by expanding markets, removing market barriers, strengthening the industry and educating the public on the benefits of solar energy.