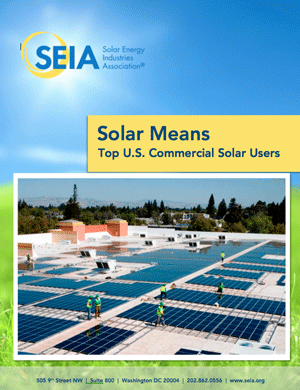 Solar energy makes financial sense. That’s why business leaders in America’s brightest, most competitive companies are increasingly choosing to install solar energy systems at their facilities. For the third year in a row, not only are more businesses choosing solar, but those that have used solar in the past are doing so again and again on rooftops across America. Walmart, Kohl’s, Costco, Apple, IKEA and more have all embraced solar energy. Collectively, the companies with the most solar capacity in the U.S. now have 1,110 systems totaling 569 megawatts (MW), generating enough electricity to power more than 115,000 homes. And these companies are installing even more.

If you would like to provide data on your company's solar portfolio, please fill out our survey.

The price of solar energy has fallen dramatically over the past few years, while the price of fossil generation continues to experience significant volatility. This growing adoption of solar by the commercial sector is predominantly the result of consistent price declines. The average price of a completed commercial photovoltaic (PV) project in Q2 2014 has dropped by 14 percent year over year and more than 45 percent since 2012. As solar prices continue to fall, more businesses in more states turn to solar to cut operating costs. While this report focuses on some of America’s largest companies, businesses of all sizes and types, including farms, retailers, manufacturing plants, wineries and office buildings, have chosen solar to power their operations. Since 2010, U.S. businesses have installed solar systems at their facilities more than 32,000 times.

Browse and use photos from the report>>

For the second straight year, U.S. businesses, non-profits and government organizations added more than 1,000 MW of new PV solar installations. As of mid-2014, there were 4,531 MW of commercial solar PV installed on 41,803 business, non-profit and government locations throughout the U.S.

This third edition of Solar Means Business chronicles the continued and growing deployment of the leading commercial solar users in the U.S. For this edition, researchers attempted to contact all Fortune 100 companies, as well as a number of additional businesses with known significant solar portfolios, to gather data. The increased solar adoption by major corporations shown in this report reflects the growth displayed in the overall commercial solar sector over the last year.

The companies with the highest total solar capacity as of August 2014 have deployed more than 569 MW at 1,110 different facilities, enough to power 115,000 American homes. This represents growth of 28 percent over last year’s Solar Means Business report (445 MW) and is more than double the capacity shown in the 2012 report (279 MW). This growth is occurring in new state markets as well; the companies analyzed in this report have deployed systems in 33 states and Puerto Rico. The same companies that previously installed solar continue to deploy more, reflecting that their earlier investments are good ones. Businesses are going solar because solar is good business.

Solar is a Smart Investment

American businesses are turning to solar because it’s good for their bottom line. For many companies, electricity costs represent a significant operating expense, and solar provides the means to reduce costs and hedge against electricity price increases. 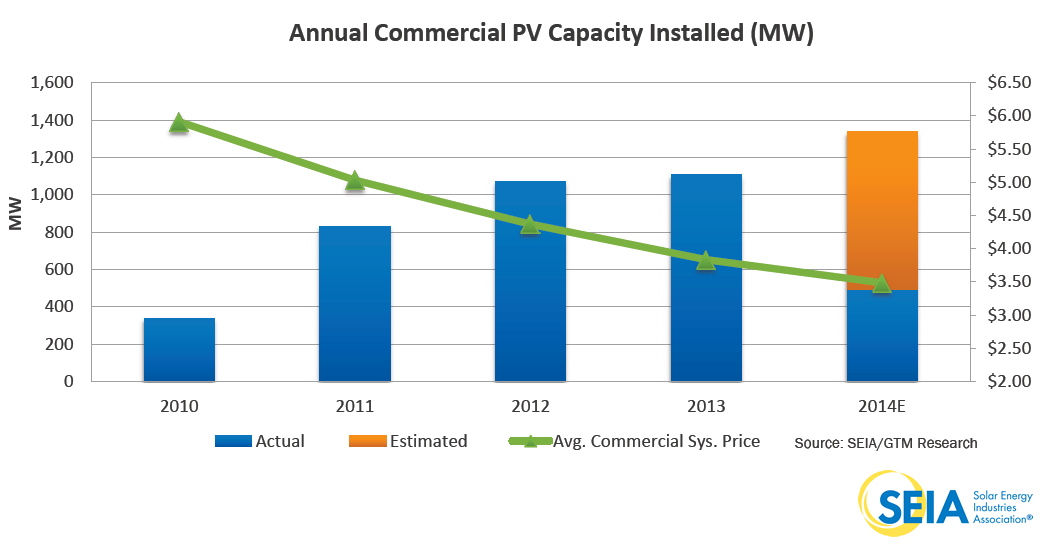 For commercial users, average electricity rates have increased more than 20 percent in ten years, moving from $0.08/kWh to more than $0.10/kWh.[1] With the commercial sector consuming more than 1.3 trillion kilowatt-hours (kWh) each year, this price increase has resulted in tens of billions of dollars in additional utility bills.[2] Not only are costs going up, prices are also becoming more volatile. The winter of 2013-2014 showed extreme volatility for many customers in the northeast.[3] Solar allows businesses to mitigate this variance by producing their own electricity with zero fuel costs using on-site generation. This not only reduces the amount of electricity purchased from utilities, it also often lowers demand charges – a common fee for commercial consumers. 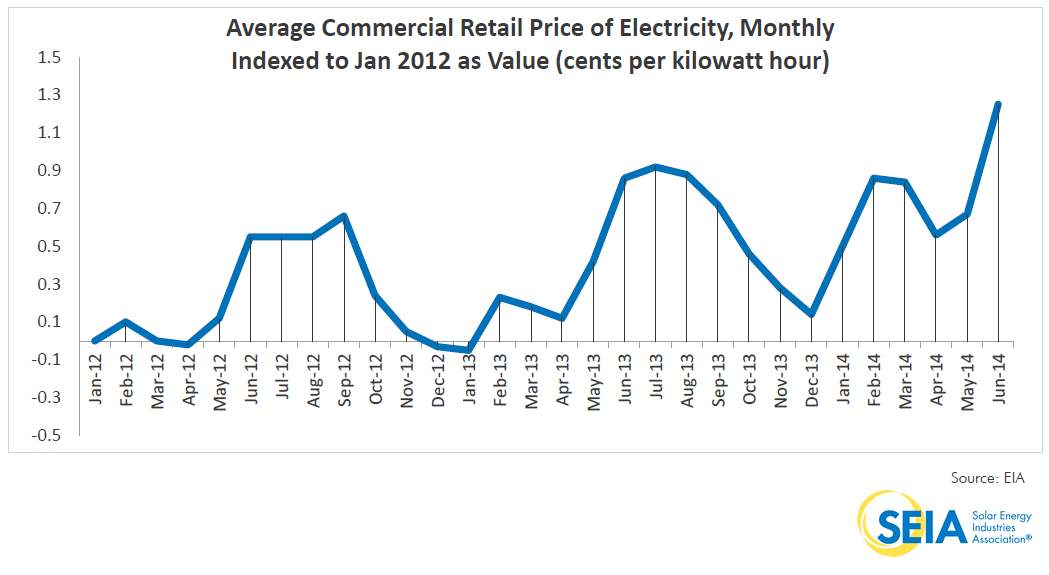 Despite the lower system prices and the avoided uncertainty associated with variable fuel costs in traditional generation, the upfront capital costs of solar can be a burden for small- and medium-sized businesses.  These companies may not receive as favorable loan terms as some of the large, iconic companies mentioned in this report, leading to underserving of these consumers. Fortunately, we’re seeing financial innovations targeted at enabling such businesses to take advantage of the value solar offers.

Perhaps one of the most significant solar financing innovations in recent years is the development of third-party ownership, which has become a dominant force in the solar market. Third-party ownership involves a power purchase agreement or lease where the third party designs, constructs, owns and operates the solar system and then sells electricity produced by the system directly to the customer at reduced rates. This structure allows the customer to forego the upfront capital costs of a solar system while immediately taking advantage of the benefits that solar provides.

It is this growth and innovation that is leading solar to become a cheaper and more reliable way to power homes and businesses. For American companies, an investment in solar allows them to reduce energy costs, allocate resources to core business operations, and better plan for the future. Solar really does mean business.

While many businesses have adopted solar to supply their own electricity, some businesses are taking a different approach to putting their rooftops and land to work. Real Estate Investment Trusts (REITs) have been very active in the solar market. These are real estate companies that own property that they traditionally lease to commercial entities. In recent years, companies like ProLogis, Hartz Mountain Industries, General Growth Properties and Kimco have recognized solar energy’s ability to transform underutilized land and roof space into an asset. Since these companies do not necessarily use all the power consumed in their facilities directly, they can either use the solar generation to offset their tenant’s electricity bills or sell directly to the utility.

Still other businesses are putting their capital to work to help deploy solar energy. Honda has created a fund that helps to finance the installation of residential solar for their customers. Companies like Google have created similar funds which help to finance solar development on homes, businesses and even at the world’s largest utility-scale solar generating plant, Ivanpah.[4] 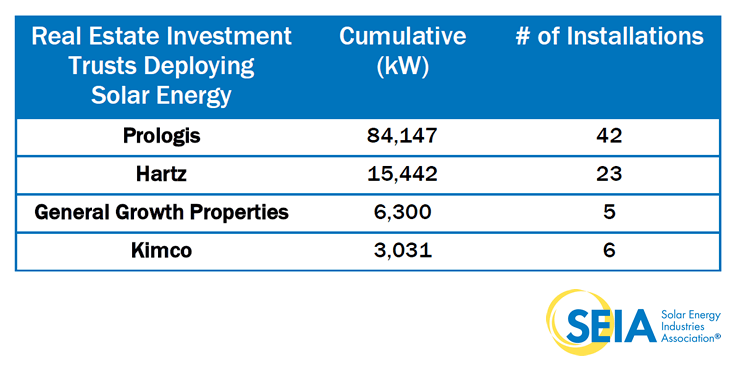 Many of America’s largest companies also lead the way in solar deployment. The list below ranks businesses by their total on-site installed solar capacity, or the maximum power potential measured in megawatts.

The 2014 rankings show many of the same leading companies as prior years.  Notable differences include the 15 MW jump in Walmart’s capacity as it continues to dominate the top position. Target also made a big jump up in relative position as it moved from 16th to 8th with the addition of 15 new solar systems. Altogether, the companies analyzed in this report installed more than 569 MW across the country, up from 445 MW last year, an increase of 28 percent. 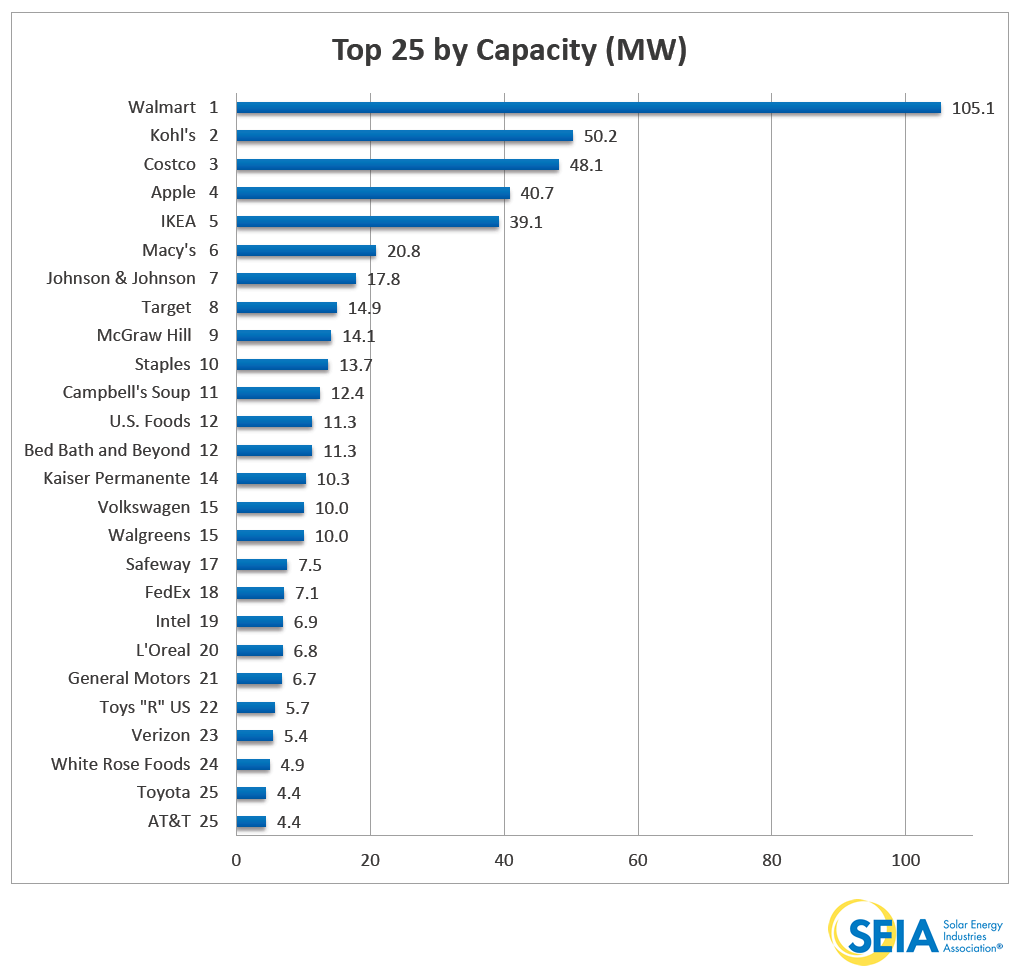 Solar is an attractive investment for companies in a range of industries. The rankings below show the leading solar commercial users by industry sector.  While retailers have installed the most capacity, auto manufacturers, pharmaceuticals and food servicers, as well as companies in many other industries, have all looked to solar to lower operating costs.

Top Companies by Number of Installations

Companies that have installed solar continue to add more. While energy demands and load profiles vary significantly by company and by facility, companies continue to grow their solar portfolios. Whether they are installing new solar systems or expanding existing systems, companies are adding solar at a faster and faster rate. The list below ranks businesses by the number of their on-site solar installations. The Top 25 companies have installed more than 1,110 individual systems, as solar meets the energy needs of a diverse number of industry leaders throughout the U.S. 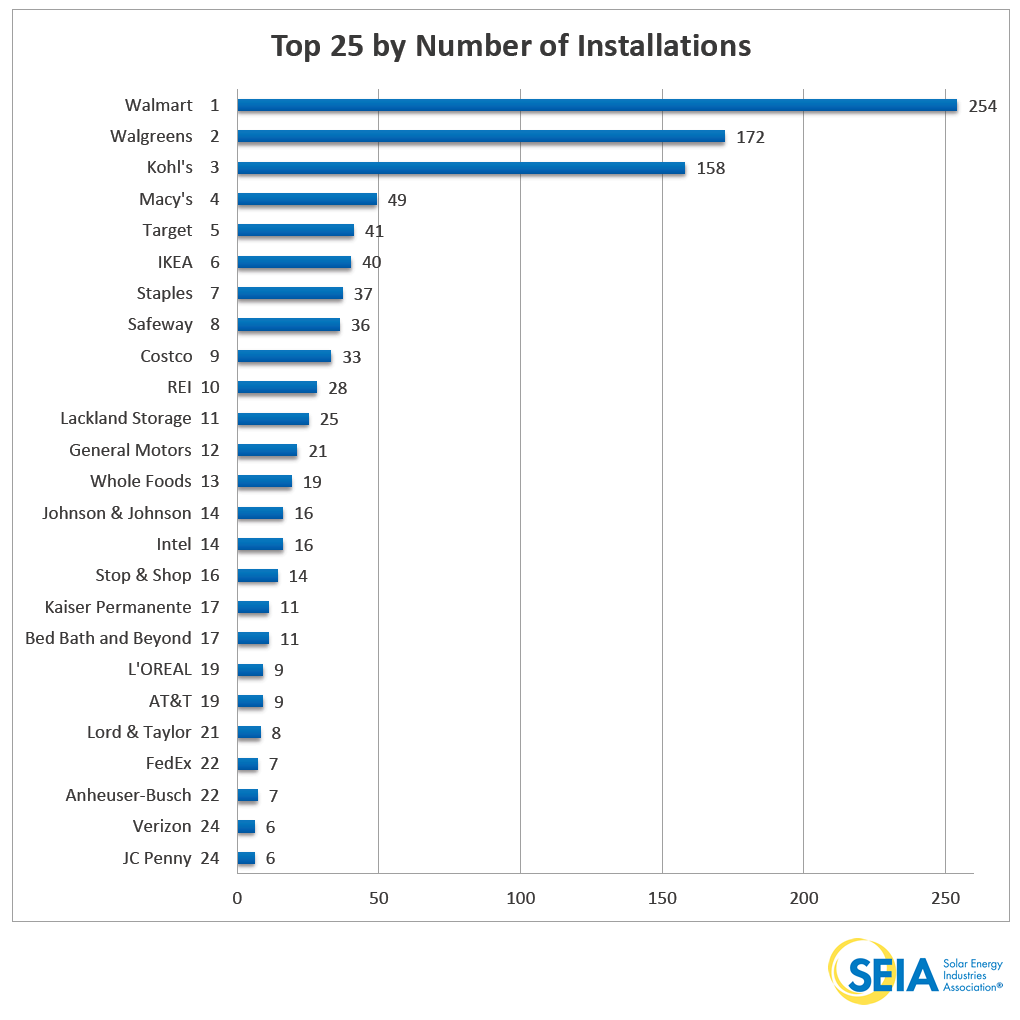 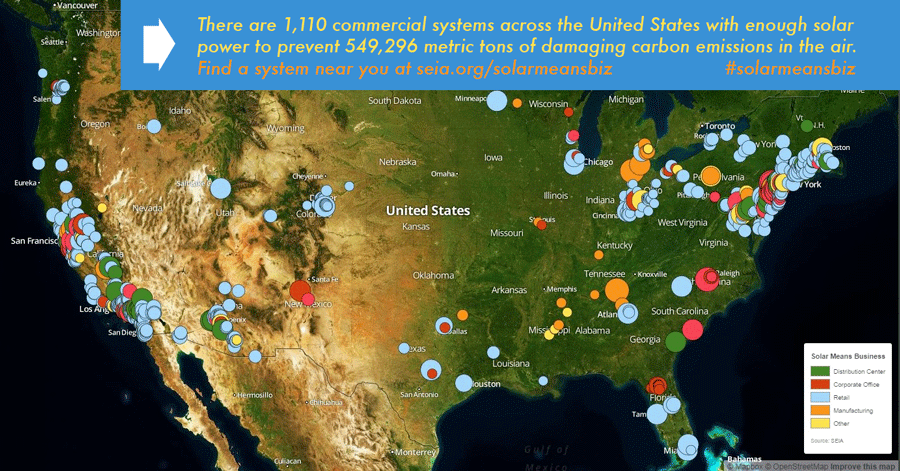 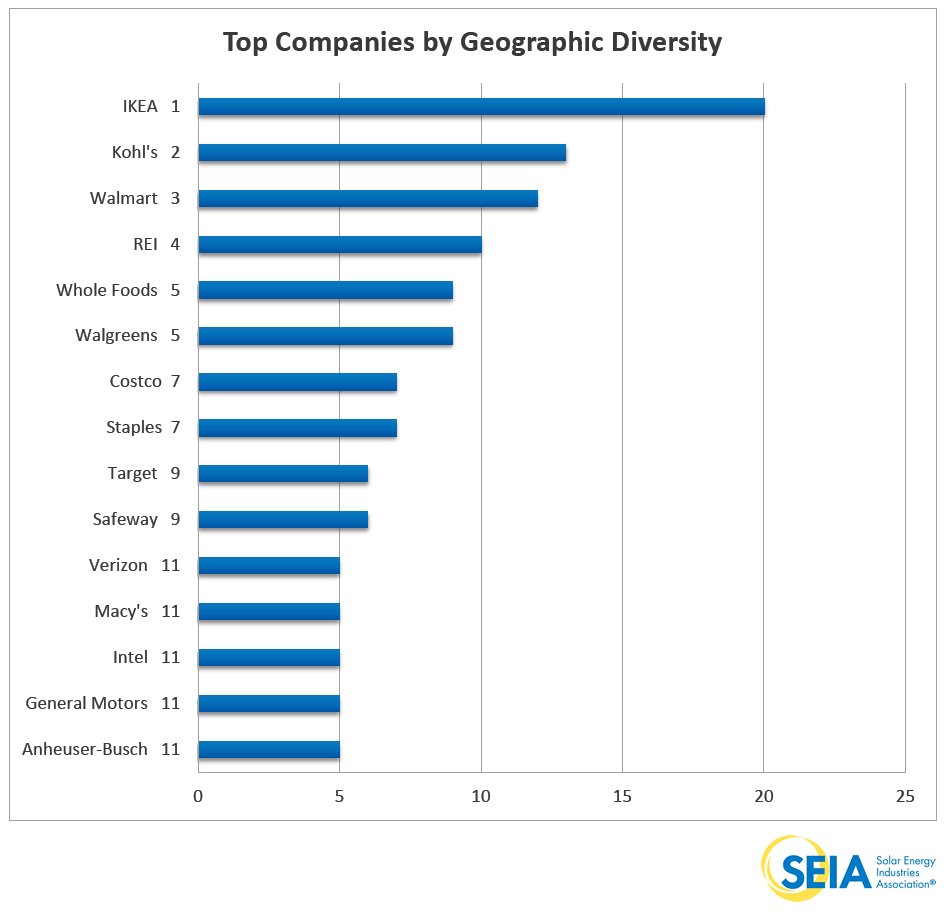 The rest of the U.S. is catching up to the likes of California and New Jersey, the first and second largest state markets for commercial solar. Leaders in those states and others like them have put in place smart, effective policies that have enabled businesses to invest in solar. Solar Means Business 2014 shows that success spreading to new state markets. The Top 25 companies completed solar installations in three new states over the past year. While IKEA continues to have solar installations in the most states, there are a number of new entrants to this ranking, including Anheuser-Busch and Verizon, while Whole Foods also expanded its solar use into new states. In total, 129 million people in 33 states and Puerto Rico live within 20 miles of at least one of the 1,110 commercial solar installations that were analyzed in this report.

Commercial Users by Percent of Facilities with Solar Power

The table below lists companies in order of the percentage of their facilities that are solar powered. This list provides another comparison for those companies that ranked highly in both installed capacity and number of installations. Note, this list is exclusively populated by companies surveyed for this report and does not include smaller companies that might otherwise be considered to have higher ratios than presented below.

This is the third edition of this report, originally initiated by SEIA and Vote Solar. This year SEIA set out to update its database, with outreach support from The Climate Group. Researchers attempted to contact representatives of all Fortune 100 companies and a number of additional businesses known to have significant solar portfolios, and combed public databases to collect data. While every effort was made to collect complete and accurate data, not every company responded to our data requests and public databases do not capture all commercial installations. It should also be noted that new systems are commissioned every day. Ultimately, SEIA believes this is an accurate portrayal of the leading commercial users of solar energy in the U.S. as of August 2014.

This analysis counts only on-site PV systems that supplied power directly to company facilities for the rankings. This does not include utility PV power plants that sell wholesale electricity. While some companies purchase solar renewable energy credits (SRECs) from solar power generated off-site, this report does not consider such transactions due to limitations in data collection and verification. Likewise, SRECs are produced by many on-site PV systems and are sold to utilities or other buyers. While companies that sell their SRECs do not retain the environmental attributes of the system, such systems are still counted for the report. Regardless of a company’s decision to retain or sell credits, the decision to deploy an on-site solar installation is an essential step in solar market deployment.