The U.S. military has installed more than 130 MW of solar in 31 states across the country. 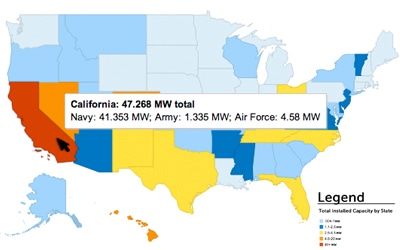 The Navy, Army and Air Force have each implemented aggressive plans that are increasing the U.S. investment in solar and encouraging innovation in the industry. As of early 2013, there are more than 130 megawatts (MW) of solar photovoltaic (PV) energy systems powering Navy, Army and Air Force bases in at least 31 states and the District of Columbia. Combined, these installations provide enough clean energy to power 22,000 American homes. Learn more about the military's use of solar.