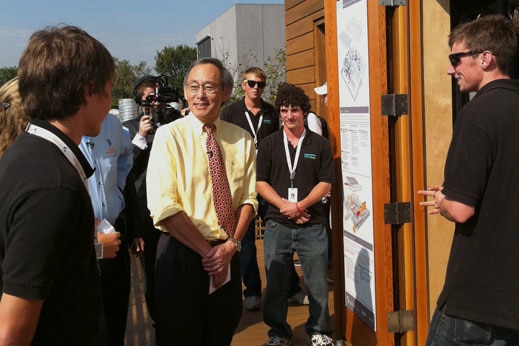 Earlier today, I attended a briefing by U.S. Energy Secretary Steven Chu in which he announced a new initiative that the administration is launching to expand clean energy technologies in developing countries. This program is a great sign of leadership by the administration given how vocal developing countries have been here at COP15. If you haven't read about the new Renewables and Efficiency Deployment Initiative (Climate REDI), you can read more here.

Specifically with regard to solar, Climate REDI will accelerate the deployment of solar home systems and solar lanterns, as well as increased funding for research and development (R&D). But what really caught my attention during Secretary Chu's briefing was that he debunked two major myths about solar energy.

You may have heard (mostly from people in the fossil fuel industries) that solar is too expensive. As Secretary Chu pointed out, solar prices have dropped dramatically since the 1980s when costs were around $20 per watt for photovoltaic panels. Prices have come down to about $2 per watt currently and are expected to shrink by half to $1 per watt in the next year.

The other myth perpetuated by the fossil fuel executives is that there's too much money being spent on R&D for solar. In fact, the money that was included in the American Recovery and Reinvestment Act was a one-time boost that got us back to the R&D funding level the solar industry had during the Carter Administration.

The truth is, federal support for solar ended in 1980s and the industry has made incredible cost improvements in the meantime. Since then the solar industry has emerged as an economic growth sector, while fossil fuels have led us to this climate crisis we're negotiating about here in Copenhagen. But for the solar industry to take the next step to play a significant role in fighting climate change and creating jobs, we need to adopt the Solar Bill of Rights which I'll be discussing in greater depth tomorrow at SEIA's BINGO (Business, Industry, Non-Governmental Organization) side event tomorrow at the Bella Center with groSolar CEO Jeff Wolfe and a special guest.

WASHINGTON, D.C. —Today the Solar Energy Industries Association (SEIA) is releasing a new tool to increase supply chain transparency and help ensure that all solar components are made ethically throughout the solar value chain.

Taking the Next Step Toward Our Clean Energy Goals

The latest U.S. Solar Market Insight report makes it clear that the solar industry will see historic growth over the next decade. In fact, the report’s forecasts show the U.S. solar market will grow 4x by 2030 and reach over 419 gigawatts (GW) of capacity.