Photovoltaic (PV) devices generate electricity directly from sunlight via an electronic process that occurs naturally in certain types of material, called semiconductors. Electrons in these materials are freed by solar energy and can be induced to travel through an electrical circuit, powering electrical devices or sending electricity to the grid.

PV devices can be used to power anything from small electronics such as calculators and road signs up to homes and large commercial businesses.

How does PV technology work?

Photons strike and ionize semiconductor material on the solar panel, causing outer electrons to break free of their atomic bonds. Due to the semiconductor structure, the electrons are forced in one direction creating a flow of electrical current. Solar cells are not 100% efficient in crystalline silicon solar cells, in part because only certain light within the spectrum can be absorbed. Some of the light spectrum is reflected, some is too weak to create electricity (infrared) and some (ultraviolet) creates heat energy instead of electricity. 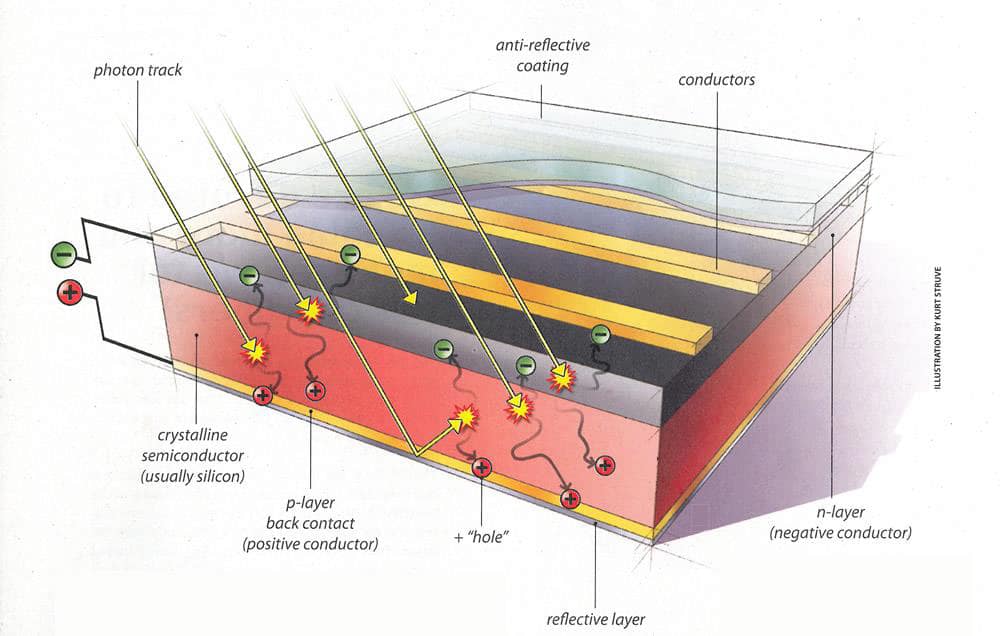 Diagram of a typical crystalline silicon solar cell. To make this type of cell, wafers of high-purity silicon are “doped” with various impurities and fused together. The resulting structure creates a pathway for electrical current within and between the solar cells.

Other Types of Photovoltaic Technology

In addition to crystalline silicon (c-Si), there are two other main types of PV technology:

The PV effect was observed as early as 1839 by Alexandre Edmund Becquerel, and was the subject of scientific inquiry through the early twentieth century. In 1954, Bell Labs in the U.S. introduced the first solar PV device that produced a useable amount of electricity, and by 1958, solar cells were being used in a variety of small-scale scientific and commercial applications.

The energy crisis of the 1970s saw the beginning of major interest in using solar cells to produce electricity in homes and businesses, but prohibitive prices (nearly 30 times higher than the current price) made large-scale applications impractical.

Industry developments and research in the following years made PV devices more feasible and a cycle of increasing production and decreasing costs began which continues even today.

Rapidly falling prices have made solar more affordable than ever. The average price of a completed PV system has dropped by 59 percent over the last decade. 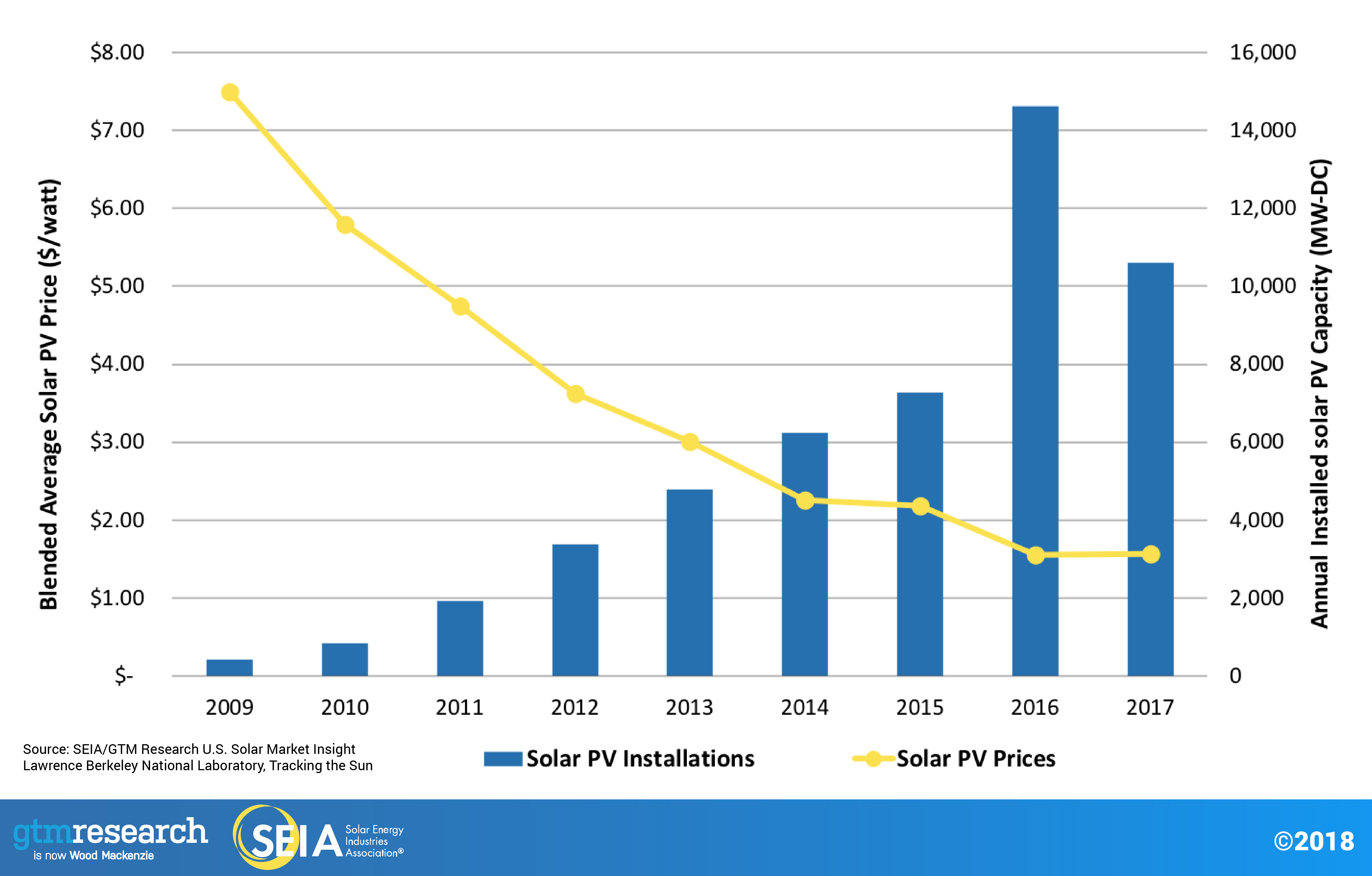 For more information on the state of the solar PV market in the US, visit our solar industry data page.

The cost of PV has dropped dramatically as the industry has scaled up manufacturing and incrementally improved the technology with new materials. Installation costs have come down too with more experienced and trained installers. Globally, the U.S. has the third largest market for PV installations, and is continuing to rapidly grow.

Most modern solar cells are made from either crystalline silicon or thin-film semiconductor material. Silicon cells are more efficient at converting sunlight to electricity, but generally have higher manufacturing costs. Thin-film materials typically have lower efficiencies, but can be simpler and less costly to manufacture. A specialized category of solar cells - called multi-junction or tandem cells - are used in applications requiring very low weight and very high efficiencies, such as satellites and military applications. All types of PV systems are widely used today in a variety of applications.

There are thousands of individual photovoltaic panel models available today from hundreds of companies. Compare solar panels by their efficiency, power output, warranties, and more on EnergySage.

What's in a Megawatt? Find out how many homes are powered by solar