The 2018 State Solar Policy Changes You Need to Know

This article was originally published on the blog of Aurora Solar, a solar design and sales software company.

The solar industry is always dynamic and keeping track of the latest developments around the nation can be tricky. This year got off to a rocky start with the announcement in January that a 30% tariff would be imposed on foreign-manufactured solar components. In the months since, many other noteworthy policy developments have been rolled out across the country at the state-level. Fortunately, many of those state actions are positive developments for solar, though several states delivered industry setbacks. In today’s article, we provide a roundup of some of the key state-level solar policy developments of 2018 to date.

Fortunately, many of those state actions are positive developments for solar, though several states delivered industry setbacks. In today’s article, we provide a roundup of some of the key state-level solar policy developments of 2018 to date.

In the face of uncertainty and alarm over solar tariffs, it’s good to see that many states around the country are showing their support for solar in recent policy decisions.

By far the biggest state policy update, in terms of impacts for the solar industry more broadly, comes out of California. On May 9, the California Energy Commission (CEC) mandated that nearly all new homes have rooftop solar starting in 2020. The changes are part of the state’s newly approved 2019 Building Energy Code.

The decision will significantly increase demand for solar energy; Greentech Media predicts a 14% increase in total US solar sales over the next four years as a result! It also represents an important shift in making solar energy a new normal for consumers. Resulting industry changes may also contribute to falling costs for California solar installations.

This announcement will spur further growth in the California solar market, which has more installed solar than any other state by a factor of five according to SEIA. It also will contribute to the state’s commitment to sourcing 50% of its electricity from renewables by 2030. 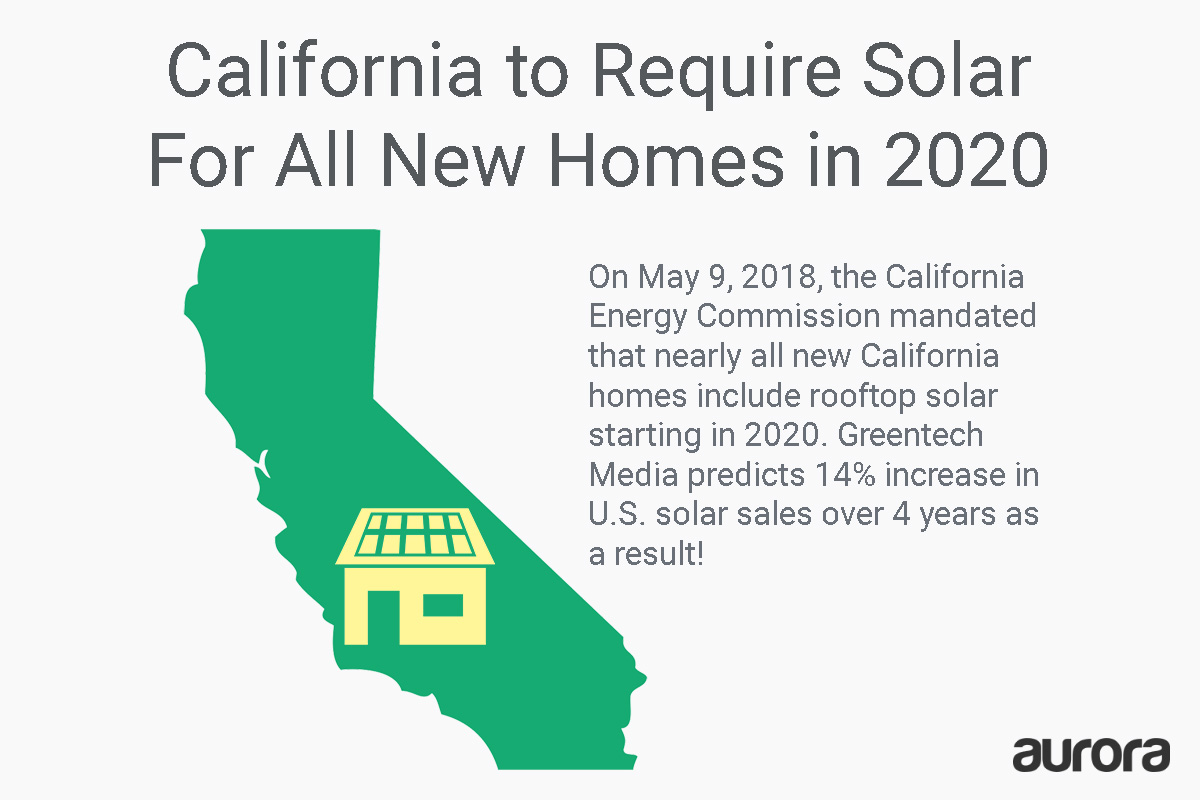 Colorado has become one of the first states to designate energy storage as a consumer right. Colorado solar customers who want to install energy storage will likely find doing so involves less red tape in the future; the law states that residents should be able to install, use, and interconnect energy storage systems without unnecessary restrictions. Signed by Colorado Governor John Hickenlooper in late March, the law calls upon the Colorado Public Utilities Commission to establish rules governing customer-sited energy storage. 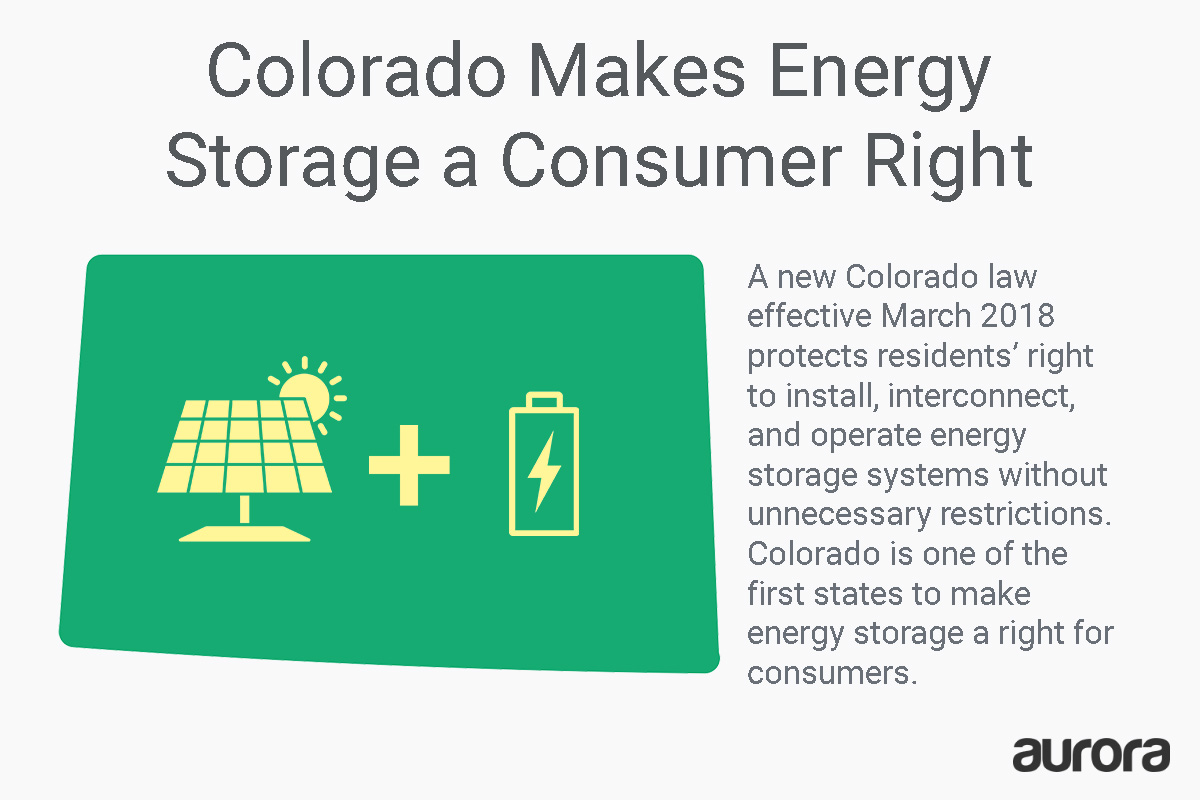 In a notable development for the Florida solar market, the Public Service Commission issued a statement in late April declaring that residential solar leases are allowed in the state. Previously, solar leases were deemed “third-party electricity sales,” which are prohibited in Florida.

Sunrun successfully argued to the commission that solar leases should be allowed because the payments are fixed and not contingent upon the amount of solar electricity the system produces. The news means prospective Florida solar customers have a new financing option, and opens up a new product for Florida solar companies. 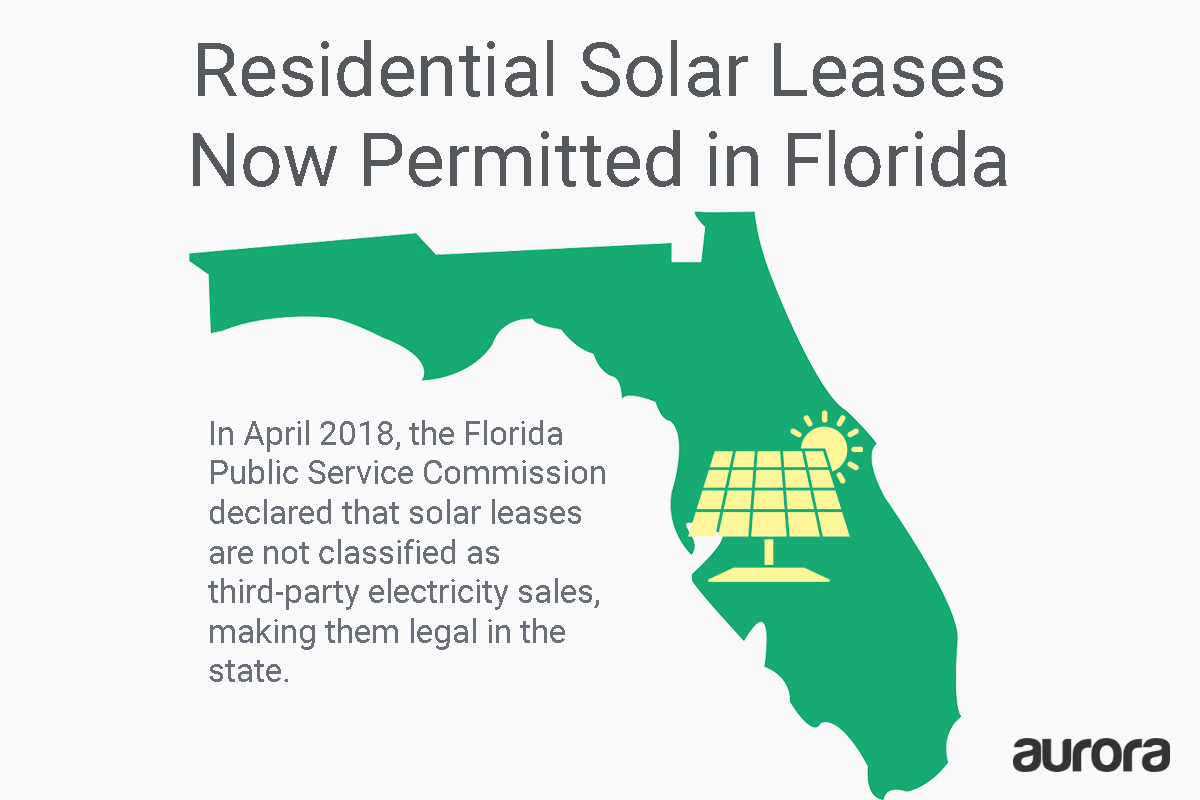 In big news for the Hawaii solar community, the state is changing the revenue model for investor-owned electric utilities to better align their incentives with the growth of solar and energy storage. The measure is expected to aid the process of modernizing the state’s electricity grid because utility revenues will now be linked to performance metrics. The use of distributed energy resources like solar, rather than investment in costly new utility-owned infrastructure projects, will be incentivized.

(Note: for related insights on how new revenue models for utilities can advance the growth of solar, see Aurora’s interview with Dr. Varun Sivaram.) 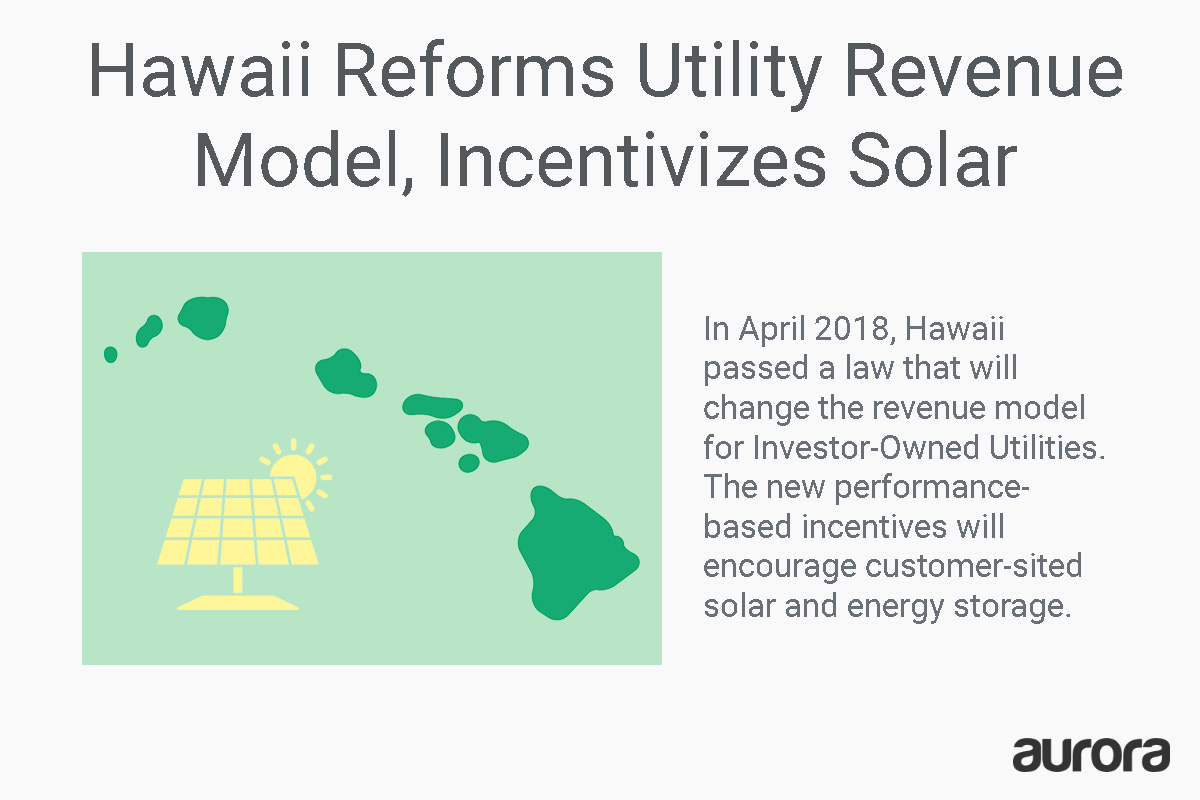 The New Jersey solar industry also got good news this year. The legislature passed a bill which updates the state’s Renewable Portfolio Standard (RPS), requiring the state to source 35% of its power from renewables by 2025 and 50% by 2030. That bill also increases the proportion of the state’s energy that must come from solar specifically to 5%, making it the most ambitious such policy in the nation.

Although these developments are not final as the bill is awaiting the signature of New Jersey Governor Philip Murphy, he has expressed support for the measure and is expected to sign. 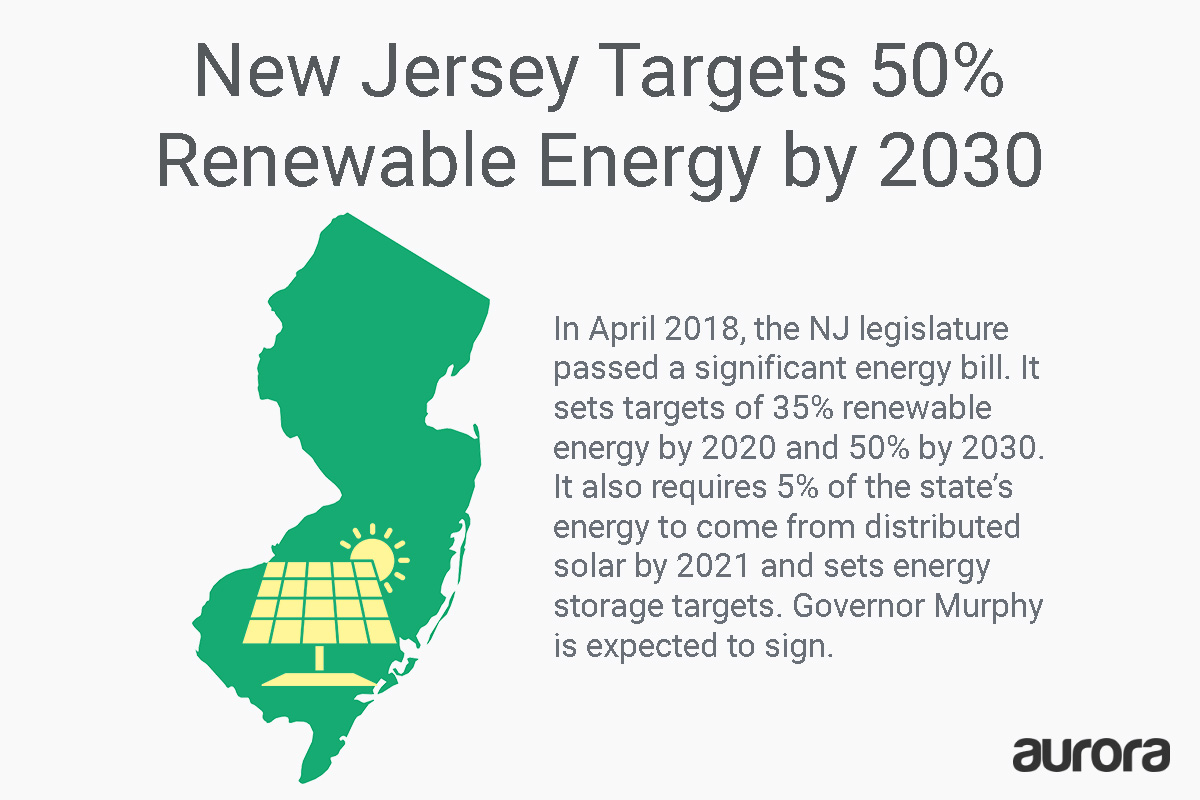 Two new policies with important implications for the Utah solar industry were signed into law by Utah Governor Gary Herbert in late March. One extends a $1600 tax credit for residential Utah solar customers for an additional two years. The credit will begin to be phased out in 2021 over a period of three years. The other is a consumer protection measure that requires solar companies provide all residential customers with a disclosure statement to help ensure they understand the terms of their contracts. SEIA has applauded the developments. 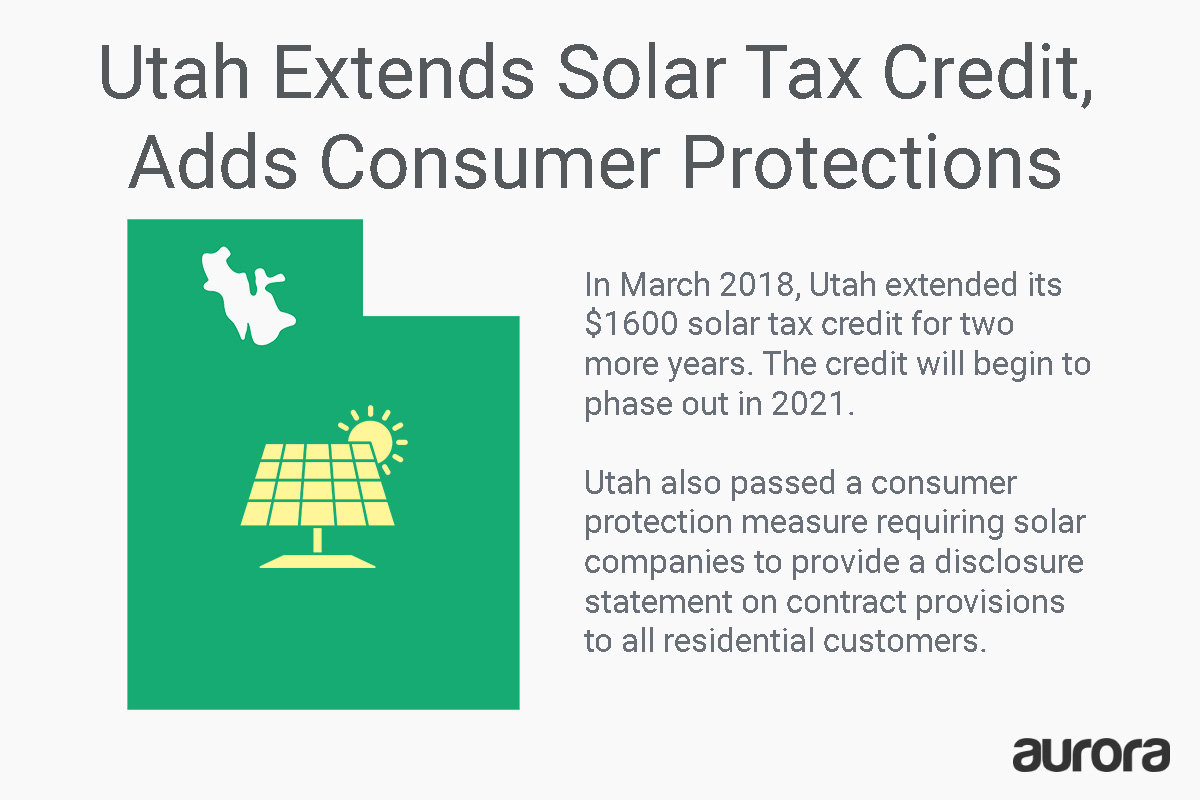 Now for the less fun news. Although there have been a number of state-level victories for solar energy recently, there have also been several negative developments—notably the elimination of net metering in multiple states. (For an overview of how net metering is changing and being scaled back around the country, check out Aurora’s blog post on the topic.)

The Connecticut solar industry has been outspoken against a bill recently passed by the legislature that would eliminate net metering for solar customers. Advocacy groups have decried the bill as a serious threat to 2000+ Connecticut solar jobs. The bill is awaiting signature by Governor Dannel Malloy, who has expressed support and is expected to sign it.

Utilities would be tasked with developing new tariff-based renewable energy programs that would replace net metering for Connecticut solar customers, though it is not yet clear what form those would take. One bright spot in the bill is that it would establish a target of 40% renewable energy by 2030 under the state’s renewable portfolio standard by 2030. 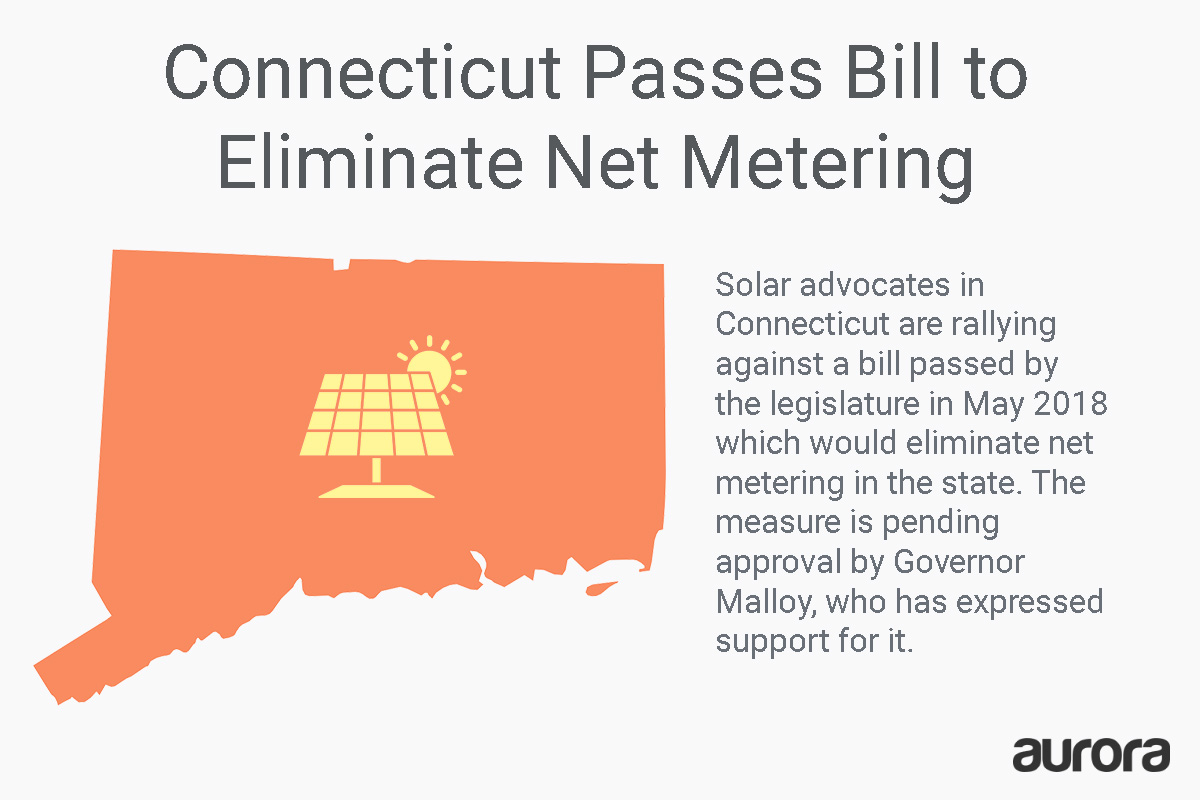 In one of the first blows to solar energy this year, Massachusetts approved new charges for new solar customers in January. At the same time, the state became the first in the nation to apply demand charges to all residential net metering customers, a “charge without a cause” according to industry groups.

Demand charges, which typically only apply to commercial customers, are based on the maximum amount of energy the customer used during any (usually 15-minute) interval during the month. They are very difficult for customers to control and, as we discuss in a commercial case study in California, can significantly reduce solar savings. 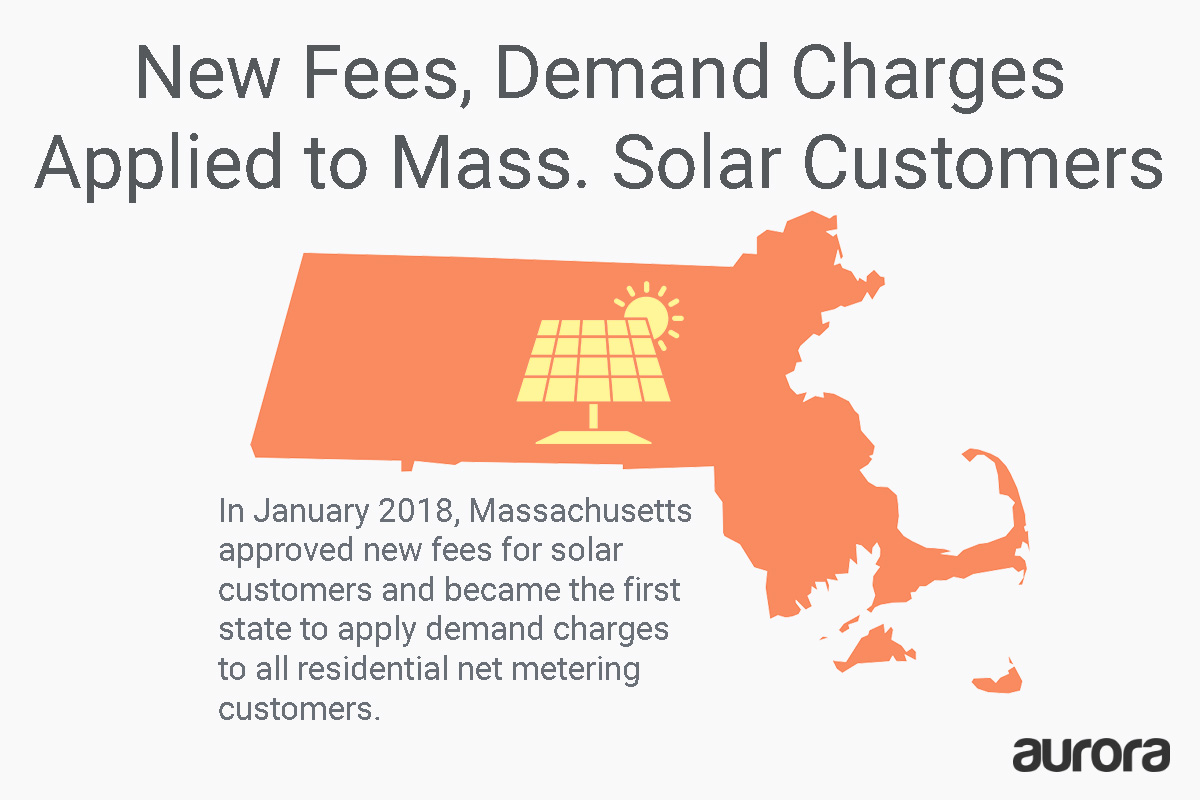 Michigan dealt a serious blow to solar by eliminating net metering. In late April, the Michigan Public Service Commission elected to replace net metering with a new approach. Under this policy, solar customers will buy energy from the grid at the retail rate but be compensated for the solar energy they send to the grid at a significantly lower rate. That rate will be based on an estimate of how much the utility would otherwise pay to procure that power, an “avoided cost” calculation. Fortunately, current Michigan net metering customers will retain their current rates for 10 years, but the shift is a big loss for future Michigan solar customers.

So far, 2018 has certainly been an active time for solar policy. These changes are a mixed bag, but it’s good to see a number of states recognizing solar as an important energy source. Are there policy developments we missed? Let us know in the comments below! 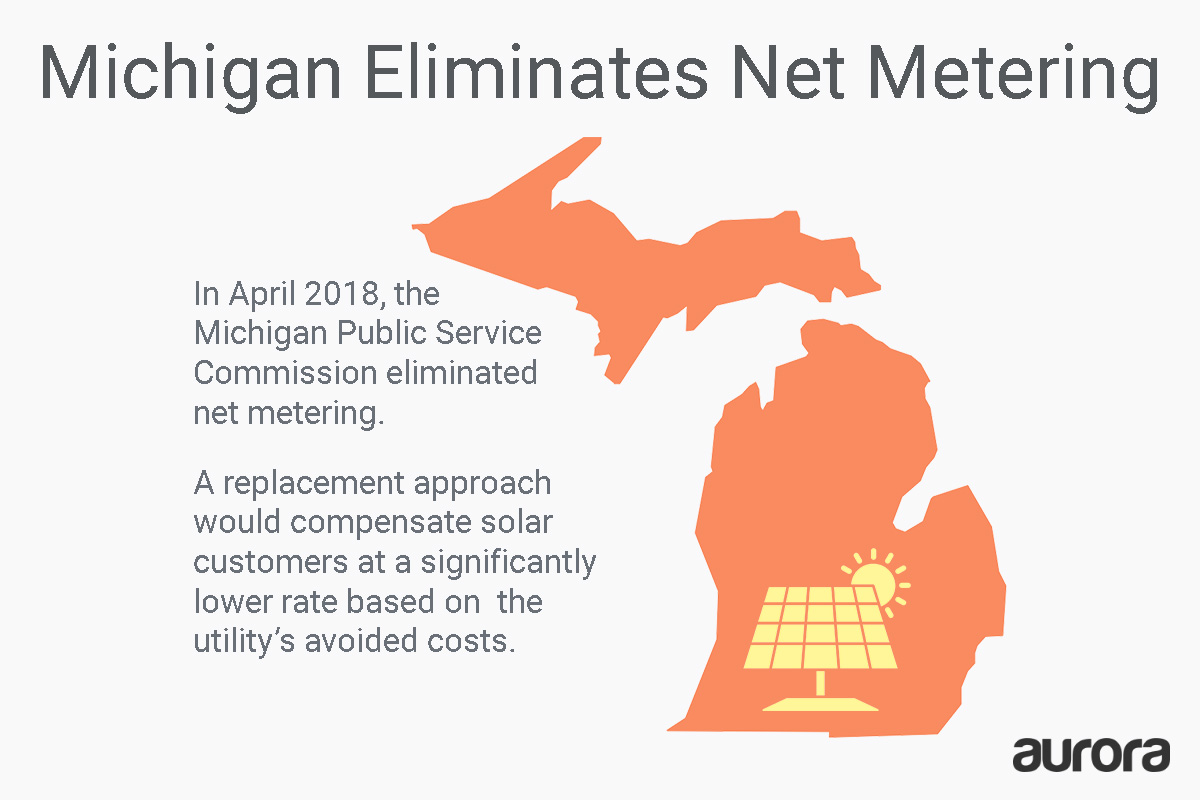 The Commerce Department’s baseless solar tariff investigation is front and center in the news, and political leaders are stepping up to protect their constituents and voice opposition.

TALLAHASSEE, FL and WASHINGTON D.C. — In a major win for energy freedom and Florida’s clean energy economy, Governor Ron DeSantis vetoed a bill today that would have undercut the state’s growing rooftop solar market by phasing down net metering and allowing utilities to charge potentially unlimited fees on thousands of solar customers in the state.