According to U.S. Solar Market Insight: 2nd Quarter 2012, the utility photovoltaic (PV) market will remain strong through the last two quarters of 2012. With 3400 megawatts of utility PV projects currently under construction, and weighted U.S. average system prices 10 percent lower than the previous quarter, GTM Research forecasts an additional 1.1 gigawatts of utility PV to begin operating before year’s end. The report forecasts a total of 3200 megawatts, or 3.2 gigawatts, of PV will be installed in the U.S. in 2012, up 71 percent over 2011. 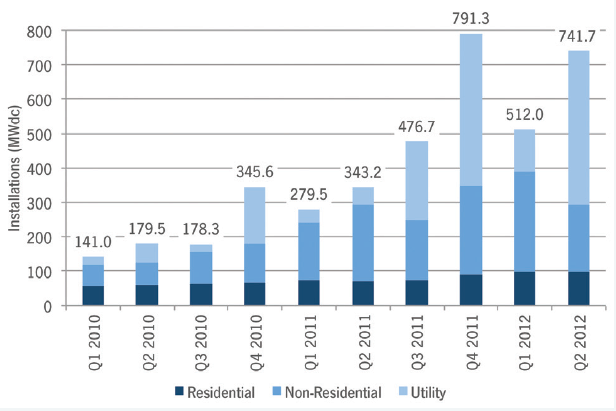 Note: Figure 1 for PV installations above does not include 30-megawatt CPV project installed in Q2 2012 characterized as concentrating solar power within the report.
Source: U.S. Solar Market Insight, 2nd Quarter 2012

“The U.S. solar industry is rapidly growing and creating jobs across America despite the slow economic recovery,” said Rhone Resch, president and CEO of SEIA. “More solar was installed in the U.S. this quarter than in all of 2009, led for the first time by record-setting utility-scale projects. With costs continuing to come down, solar is affordable today for more homes, businesses, utilities, and the military. Smart, consistent, long-term policy is driving the innovation and investment that’s making solar a larger share of our overall energy mix.”

In addition, the residential segment continues to be highlighted by consumer acceptance of third-party solar ownership models. The major state markets in California, Arizona, and Colorado all saw third-party residential solar account for greater than 70 percent of total Q2 2012 installations. U.S. Solar Market Insight: 2nd Quarter 2012 finds that in the California market, this quarter marks the first time that the average installed price of a third-party-owned system was lower than that of a system purchased outright: $5.64 per watt for third-party versus $5.84 per watt for directly-owned solar systems.

“We’re starting to see innovative PV business models take a substantial hold in the U.S. residential market,” said Shayle Kann, Vice President of Research at GTM Research. “The success of third-party residential solar providers has attracted more than $600 million in new investments in recent months. This influx of cash into the residential space signifies the growing acceptance of solar leases and power purchase agreements as a secure investment for project investors. We expect that third-party installations will claim even more market share in the coming quarters.”

In contrast to the utility and residential markets, the non-residential (e.g., commercial, government, non-profit) segment contracted, falling from 291 megawatts in Q1 2012 to 196 megawatts this quarter. Although California (down 45 percent) and New Jersey (down 35 percent) contributed to a large part of the decline, these states were not alone. Only ten of the 24 states the report tracks individually saw quarterly growth in the non-residential market in Q2 2012. This trend was likely due to a combination of factors. In some individual markets such as New Jersey, it was a result of state-market-specific factors such as SREC oversupply. In other states, Q1 2012 had been bolstered by safe-harbored 1603 Treasury Program installations.

In addition to coverage of U.S. demand markets, U.S. Solar Market Insight: 2nd Quarter 2012 provides insight into the state of PV component manufacturing in the U.S. Global oversupply continues to be the chief challenge to U.S. PV suppliers, as wafer, cell, and module production in the U.S. fell 33, 25 and 28 percent respectively in Q2 2012 as a result.

About U.S. Solar Market Insight:
The U.S. Solar Market Insight: 2nd Quarter 2012 report (http://www.greentechmedia.com/research/solarinsight) is the most detailed and timely research available on the continuing growth and opportunity in the U.S. The report includes deep analysis of photovoltaic (PV) technology in the U.S., identifying the key metrics that will help solar decision-makers navigate the market's current and forecasted trajectory.

About GTM Research:
Greentech Media delivers news, research, and analysis in the business-to-business greentech market. Using an integrated platform, we produce high quality products including industry news, market research and networking events. GTM Research, the research arm of the company, produces in-depth market reports, data services, and consulting, and is the publisher of PVNews, a monthly solar market tracker. Greentech Media is headquartered in Boston, MA, with operations in New York, NY, and San Francisco, CA. For more information, visit: greentechmedia.com, follow us on twitter: @greentechmedia, or like us on Facebook: facebook.com/greentechmedia.

About SEIA:
Established in 1974, the Solar Energy Industries Association is the national trade association of the U.S. solar energy industry. Through advocacy and education, SEIA and its 1,000 member companies are building a strong solar industry to power America. As the voice of the industry, SEIA works to make solar a mainstream and significant energy source by expanding markets, removing market barriers, strengthening the industry and educating the public on the benefits of solar energy. www.seia.org