BOSTON and WASHINGTON, D.C., 9 May 2019 – The U.S. is now home to more than 2 million solar PV installations, Wood Mackenzie Power & Renewables and the Solar Energy Industries Association (SEIA) announced today. The mark comes just three years after the industry completed its 1 millionth installation, a feat that took 40 years to accomplish. 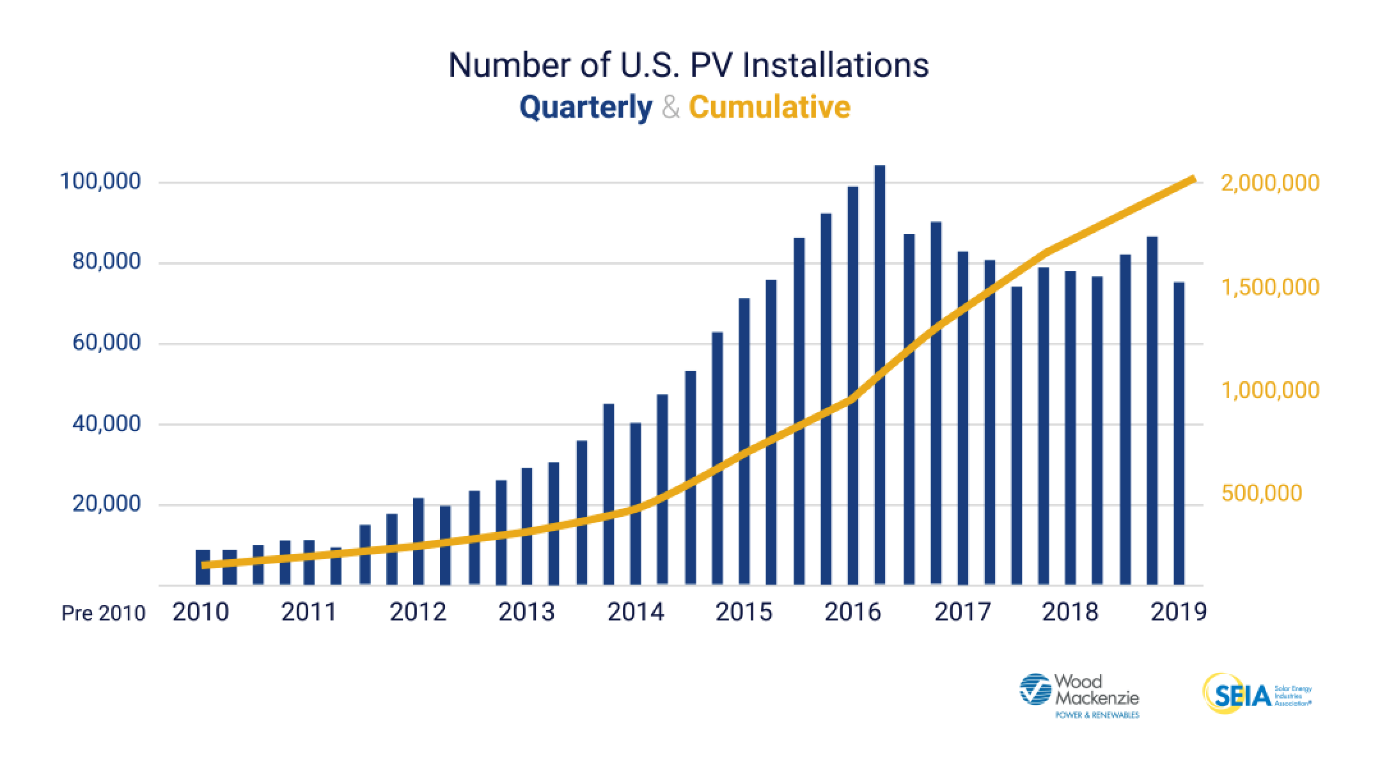 “The rapid growth in the solar industry has completely reshaped the energy conversation in this country,” said Abigail Ross Hopper, SEIA president and CEO. “This $17 billion industry is on track to double again in five years, and we believe that the 2020s will be the decade that solar becomes the dominant new form of energy generation.”

Wood Mackenzie forecasts that there will be 3 million installations in 2021 and 4 million in 2023, continuing the swift rise of solar.

California represented 51 percent of the first million installations but accounted for 43 percent of the second million. This is in large part due to a growing residential sector that is rapidly diversifying across state markets. South Carolina, for instance, was an emerging market in 2016 with 1,160 cumulative installations. Today, the state is home to more than 18,000 solar systems and is expected to add 22,000 systems over the next five years.

“According to our latest forecasts, by 2024, there will be on average, 1 solar installation per minute,” said Michelle Davis, Senior Solar Analyst with Wood Mackenzie. “That’s up from one installation every 10 minutes in 2010.”

“Our nation is harnessing homegrown sunshine at scale to lower electric bills, create jobs, reduce harmful pollution, and build a brighter future for our children and grandchildren," said Adam Browning, executive director of Vote Solar. "This remarkable progress is a true American success story made possible by customers, workers, policymakers, advocates and innovators. It shows us both what's possible and how much farther we can go when it comes to an urgent transition to clean energy."

Wood Mackenzie, a Verisk Analytics business, is a trusted source of commercial intelligence for the world's natural resources sector. We empower clients to make better strategic decisions, providing objective analysis and advice on assets, companies and markets. For more information, visit: www.woodmac.com or follow us on Twitter @WM_PowerRenew

WOOD MACKENZIE is a trade mark of Wood Mackenzie Limited and is the subject of trade mark registrations and/or applications in the European Community, the USA and other countries around the world.