The U.S. installed 930 megawatts (MW) of photovoltaics (PV) in Q3 2013, up 20 percent over Q2 2013 and 35 percent over Q3 2012. This represents the second largest quarter in the history of the U.S. solar market and the largest quarter ever for residential PV installations. Even more importantly, 2013 is likely to be the first time in more than 15 years that the U.S. installs more solar capacity than world leader Germany, according to GTM Research forecasts. 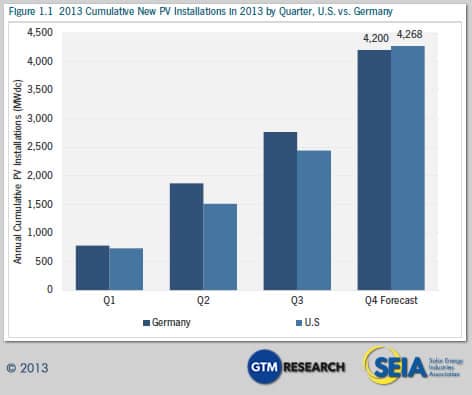 “Without a doubt, 2013 will go down as a record-shattering year for the U.S. solar industry,” said Rhone Resch, SEIA president and CEO.  “We’ve now joined Germany, China and Japan as worldwide leaders when it comes to the installation of new solar capacity. This unprecedented growth is helping to create thousands of American jobs, save money for U.S. consumers, and reduce pollution nationwide.  When it comes to preparing for America’s future, clean, dependable and affordable solar energy has become the ‘Little Engine That Could,’ defying expectations and powering economic growth – and, frankly, we’re just scratching the surface of our industry’s enormous potential.”

The residential market continues its rapid growth. Through Q3, residential PV installations were up 45 percent year-over-year, driven largely by increasingly attractive economics and by fair net metering policies.  The non-residential (commercial) market has seen the most difficulty this year with installations forecasted to stay flat over last year. The utility market continues its consistently strong installation numbers and is forecasted to exceed 1 gigawatt (GW) of installations in the fourth quarter, including Abengoa’s Solana, the world’s largest parabolic trough concentrating solar power (CSP) plant with a 6-hour thermal energy storage system. This will be the first time any individual market segment has hit that mark. 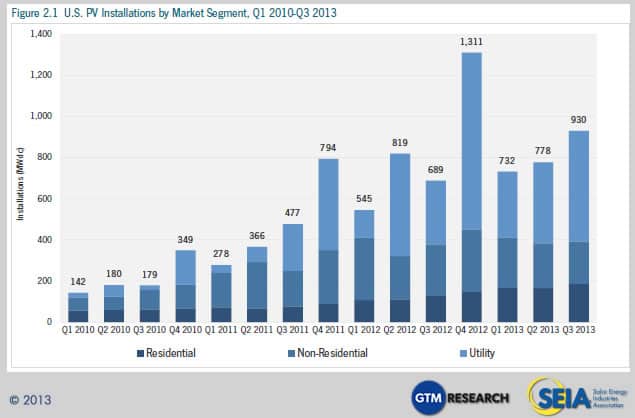 “Solar is the second-largest source of new electricity capacity in the U.S. this year, trailing only natural gas," said Shayle Kann, vice president of research at GTM. "As solar continues its march toward ubiquity, the market will require continued innovation, efficiency improvement and regulatory clarity. But already the groundwork has been laid for a mainstream solar future."

At the state-level, California continues to lead the solar PV charge, installing 455 MW in Q3. North Carolina moved into the number three spot in total PV installations with 23 percent growth over last quarter. Other movers and shakers on the state rankings list include Nevada (moving from 17 to 5) and Vermont (from 21 to 12)

Looking at the U.S. solar market on the whole, U.S. Solar Market Insight: 3rd Quarter 2013 forecasts just over 5 GW of PV and CSP will be installed during 2013. Cumulative solar capacity has already surpassed the 10 GW mark, and by the end of the year more than 400,000 solar projects will be operating across the country.

An Executive Summary of the U.S. Solar Market Insight report is available here, along with downloadable graphics.

WASHINGTON, DC - The Solar Energy Industries Association (SEIA), along with other U.S.