The U.S. installed 1,361 megawatts[i] (MW) of solar photovoltaic (PV) capacity in the third quarter of the year.  According to GTM Research and the Solar Energy Industries Association’s (SEIA) U.S. Solar Market Insight Report, Q3 2015, this marks the eighth consecutive quarter in which the U.S. has installed more than a gigawatt (GW) of PV capacity.

“This past quarter marked the calm before the storm,” said GTM Research Senior Solar Analyst Cory Honeyman. “The one-gigawatt mark for quarterly capacity additions will serve as a distant floor as project developers ramp up installations in the next five quarters before the planned step down of the 30 percent federal Investment Tax Credit (ITC).”

GTM Research expects the fourth quarter of this year to be the largest quarter for solar installations in U.S. history. Led by the utility-scale segment, the United States will install more than three GW. Looking further out, cumulative PV installations will nearly double between now and the end of 2016, bringing the nationwide total to 41 GW. 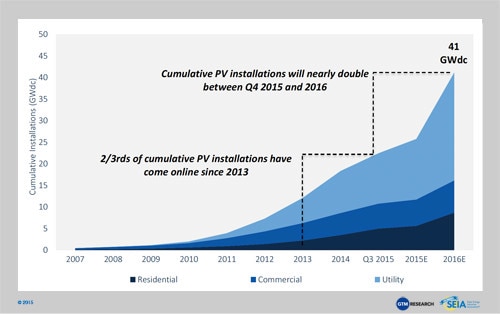 Despite some inconsistencies in the non-residential market, the report notes this segment also made progress, increasing 4 percent year-over-year and 19 percent over last quarter. 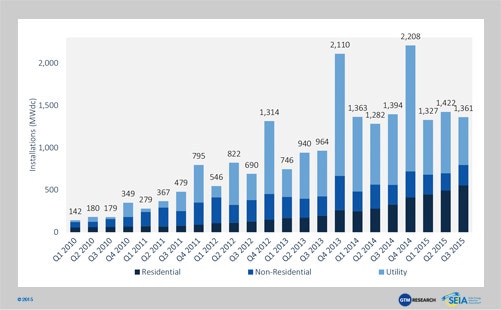 “Year after year, we’re seeing the demand for solar energy in America skyrocket, and the benefits that brings to both our nation’s economy and environment are staggering,” said Rhone Resch, SEIA President and CEO. “As we gear up for what’s expected to be an unprecedented year for our industry, and nation, this report reveals just how important it is to maintain smart, effective, forward-looking public policies, like the ITC.”

Key Findings from the Report:

About U.S. Solar Market Insight:
The U.S. Solar Market Insight report is the most detailed and timely research available on the continuing growth and opportunity in the U.S. The report includes deep analysis of solar markets, technologies and pricing, identifying the key metrics that will help solar decision-makers navigate the market's current and forecasted trajectory. For more information, visit www.greentechmedia.com/research/ussmi

About SEIA®:
The Solar Energy Industries Association® is the national trade association of the U.S. solar energy industry. Through advocacy and education, SEIA® is building a strong solar industry to power America. As the voice of the industry, SEIA works with its 1,000 member companies to champion the use of clean, affordable solar in America by expanding markets, removing market barriers, strengthening the industry and educating the public on the benefits of solar energy. Visit SEIA online at www.seia.org.

[i] Unless specified otherwise, all PV is reported in direct current (dc) based on array size and all CSP is reported in alternating current (ac) based on power block size. For more information, see http://www.seia.org/policy/solar-technology/photovoltaic-solar-electric/whats-megawatt