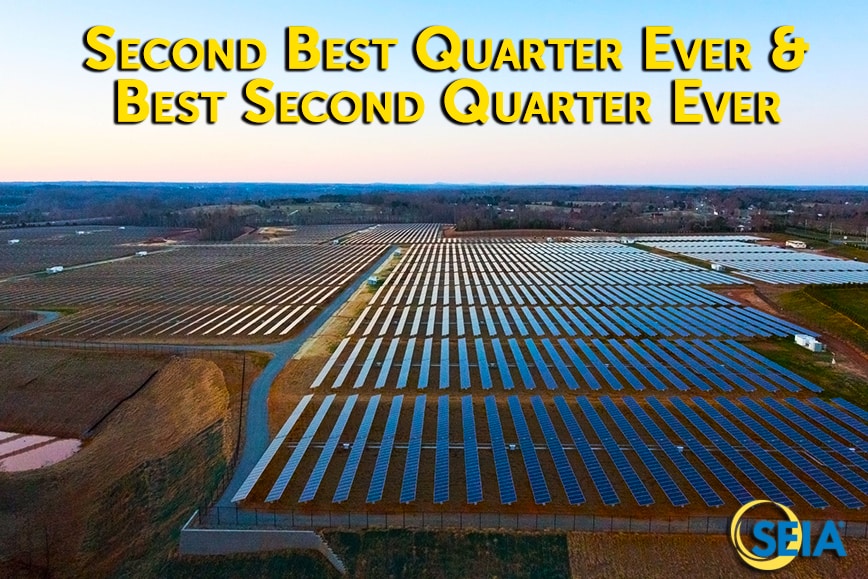 At a time of heightened tensions in the Middle East – coupled with rising gasoline prices across the United States – there is finally some good news on the energy front.  America’s solar energy industry is currently on pace to achieve a record-shattering year.

A new market analysis by SEIA and GTM Research shows the U.S. market installed 832 megawatts (MW) of new photovoltaic (PV) installations in the second quarter of this year – a whopping 15 percent increase over the first three months of 2013.

So what does this mean?  Well, for starters, there are now 9,370 MW of solar electric capacity in the United States – which is enough clean electricity to power more than 1.5 million American homes, including the White House!

Here are some other key findings of the report:

Why isn’t this front page news?  Well, here’s the “dirty” little secret that opponents of clean, renewable energy don’t want you to know: Solar is boosting the U.S. economy, while helping to protect our environment.

Today, solar employs nearly 120,000 Americans at 5,600 companies, most of which are small businesses spread all across America, making solar one of the fastest-growing industries in America.

Right now, there are 38 utility-scale, clean energy solar projects under construction in the United States – utilizing both CSP and PV technologies – putting thousands of electricians, steelworkers and laborers to work, while also helping to reduce carbon emissions from power plants.  These facilities, along with rooftop solar on homes, businesses and schools, will generate clean electricity for generations to come.

Considered together, this all adds up to a huge shot-in-the-arm for the U.S. economy.  Yet solar is truly the definition of a “twofer,” because we’re also helping the world to fight climate change.

It’s estimated that the 9.37 GW of solar electric capacity currently installed will displace 9,232,122 metric tons of CO2 emissions annually (effectively offsetting the need to plant 236 million trees).  This is equivalent to:

Take a few minutes to read the report, and you will see why solar is a such growing and important part of America’s future.  Today, we’re helping to create new jobs, grow the U.S. economy, strengthen our nation’s long-term energy security and fight climate change.

Even as this new report comes out, the debate continues over how long oil, natural gas and coal reserves will last before becoming completely depleted.  100 years?  200 years?  Maybe 300 years at most?

Then remember this: The life expectancy of the sun is about 5 billion years – give or take a millennia.

Finally, repeat after me:  Hail solar.