BOSTON, Mass. and WASHINGTON, D.C. - The U.S. solar market has experienced a tumultuous few quarters since the government last year began considering tariffs on imported solar modules and cells, but data for the second quarter of 2018 show signs of a turnaround in the market.

This is the first quarter where the data clearly show that tariffs took a bite out of the solar market. Some previously-announced projects were canceled or delayed due to the tariffs. In Q2 2018, the U.S. market installed 2.3 GWdc of solar PV, a 9% year-over-year decrease and a 7% quarter-over-quarter decrease, despite the fact that module prices fell sharply in Q2 due to lower demand in China.

Looking ahead though, the report forecasts an acceleration of solar deployment in the second half of 2018 driven by utility-scale projects. According to the report, 8.5 gigawatts of utility PV projects were procured in the first six months of the year, the most ever procured in that timeframe. This includes 26 projects exceeding 100 megawatts. Some of these were on hold in 2017 due to uncertainty around the tariffs. 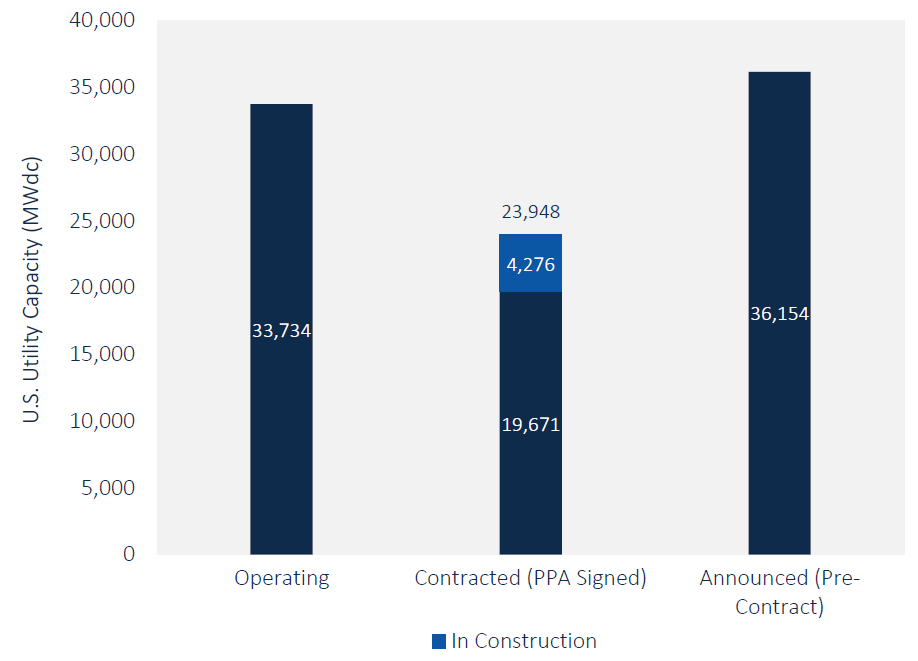 “Once lower-than-expected module tariffs were announced in January 2018, developers and utilities began announcing new projects,” Wood Mackenzie Senior Analyst Colin Smith writes in the report. “As we move toward 2019, we expect to see continued procurement growth as developers look to secure projects they can bring online before the Investment Tax Credit (ITC) steps down to 10 percent in 2022.”

As a result of the surge in procurement, Wood Mackenzie Power & Renewables has increased its 5-year forecast for utility-scale solar by 1.9 gigawatts. That is still 8 percent lower than was projected before the tariffs were announced.

“The data shows us that the tariffs have dampened solar’s growth, as previously announced projects were canceled or delayed due to the tariffs,” said Abigail Ross Hopper, SEIA’s president and CEO. “Yet, this report also reveals that the solar industry is simply too strong to be kept down. Procurement numbers show that solar is poised for substantial growth.”

In the residential market, 577 megawatts were installed in the second quarter of the year, essentially flat on both a quarterly and an annual basis. Declines in previous quarters were less a symptom of the tariffs but instead a result of customer acquisition challenges and the scaling back of several large installers. The report points to the leveling out of the market as a sign that customer acquisition challenges may be subsiding. Emerging residential state markets like Florida and Nevada posted large gains in installations and helped the segment rebound.

The report projects a flat 2018 for the solar market as a whole. Most of the utility solar being procured today will come online in the 2020 timeframe. By then, 28 states in the U.S. are expected to be adding at least 100 megawatts of solar annually, and 25 states will have more than 1 gigawatt of solar PV -- compared with only two states at that capacity in 2010. 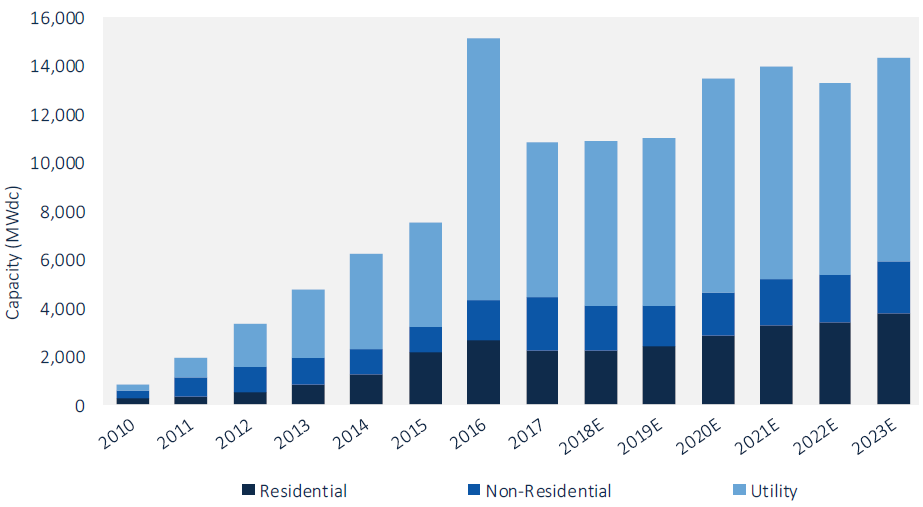 Celebrating its 44th anniversary in 2018, the Solar Energy Industries Association® is the national trade association of the U.S. solar energy industry, which now employs more than 260,000 Americans. Through advocacy and education, SEIA® is building a strong solar industry to power America. SEIA works with its 1,000 member companies to build jobs and diversity, champion the use of cost-competitive solar in America, remove market barriers and educate the public on the benefits of solar energy. Visit SEIA online at www.seia.org.