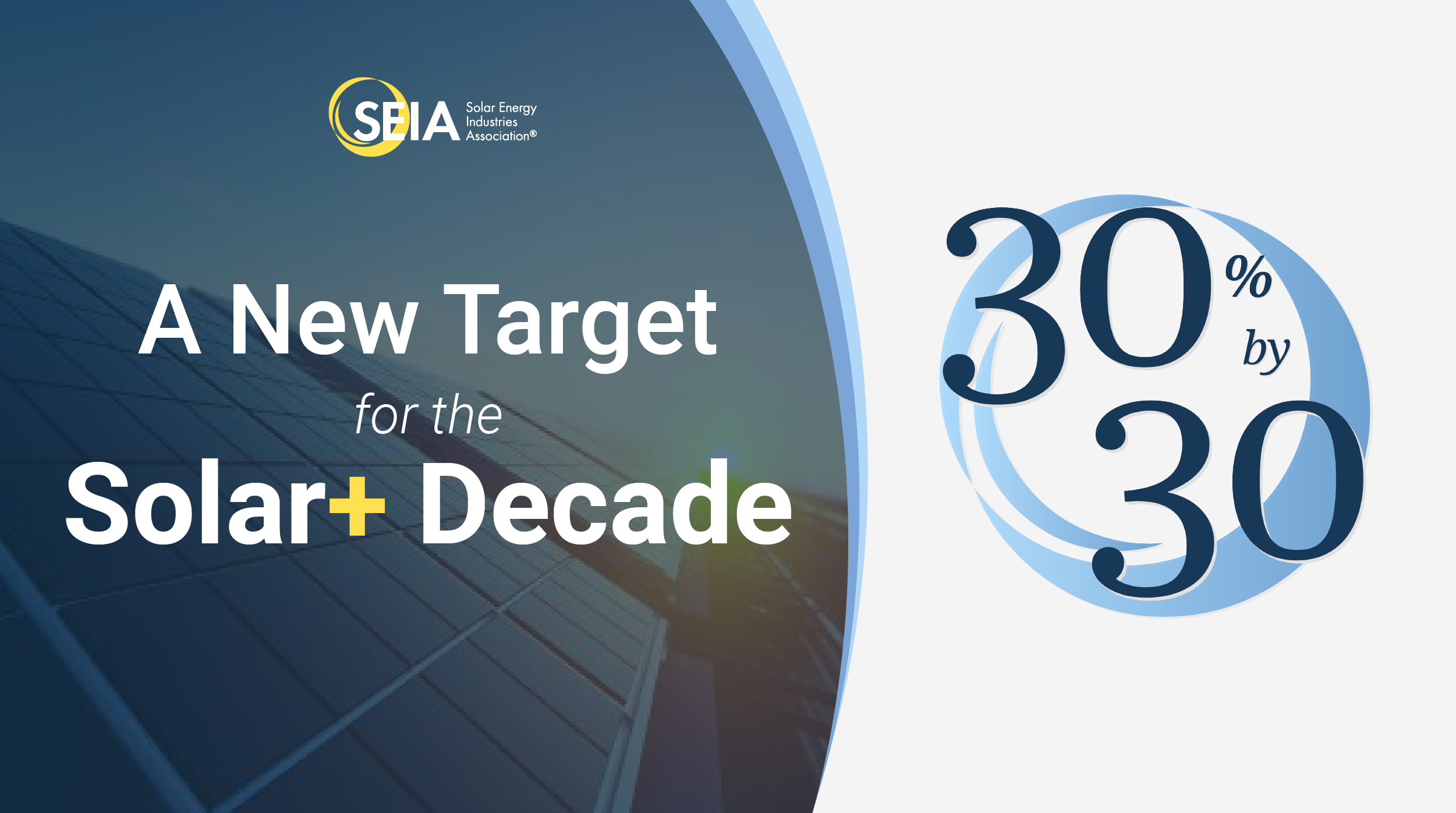 In 2019, SEIA laid out a vision for the 2020s in our Roadmap for the Solar+ Decade. In that roadmap, we set a target for solar energy to reach 20% of generation by 2030 as the U.S. transforms the electric grid and builds a robust clean energy economy.

In light of historic changes in the last two years – shifting political dynamics, increased urgency to address climate change, the challenges of the COVID-19 pandemic and more – the potential for solar growth has only increased.

As a result, we are announcing a new target for solar to reach 30% of U.S. electricity generation by 2030.

Recent forecasts for the solar industry under a business-as-usual scenario would place solar at roughly 15% of electricity generation in 2030, but with bold policy action and continued private sector innovation, this ambitious 30% target is absolutely achievable.

Doing so would make meaningful strides in lowering carbon emissions and addressing the climate crisis, while creating hundreds of thousands of jobs and injecting billions of dollars in much-needed economic investment for local communities.

Solar installations need to ramp up quickly to stay on track and tackle climate change.

To account for 30% of all electricity generation in the U.S., the solar industry will need to deploy more than 700 GWdc over the next decade to reach nearly 850 GWdc of total installed capacity. Over the 9-year period between 2022 – 2030, total solar installations must increase by nearly 130% beyond the baseline forecast from the most recent U.S. Solar Market Insight report.

To reach President Biden’s goal of decarbonizing the U.S. electricity sector, total CO2 emissions from electricity generation must be reduced by 900 MMT by 2030. Under a 30% of generation scenario, solar would account for nearly 2/3 of those reductions, with the remainder accounted for by other zero-carbon energy sources, increased electrification and improvements in energy efficiency. The baseline solar forecast would fall far short of these targets, making it all the more difficult to mitigate climate change.

We are at a key inflection point to reduce carbon emissions in line with recommendations from the scientific community, and near-term acceleration in solar deployment is critical. Staying on a business-as-usual path for just 3 years would result in 417 MMT of CO2 emissions that would otherwise be avoided. In addition to climate implications, the cost of delay in the near term would require unprecedented solar installations in the out years, raising concerns about labor and supply chain constraints.

Unprecedented Job Growth on the Horizon

Lowering carbon emissions and addressing the climate crisis are not the only reasons to accelerate solar deployment. To reach 30% of all electricity generation, the solar and storage industries would need to hire 800,000 new workers to reach a total workforce of more than 1 million Americans. Along the way, the industry would invest more than $820 billion into the U.S. economy.

As solar and other clean energy resources increase their generation portfolio on the U.S. grid, energy storage will play a critical role in managing demand peaks and ensuring a reliable, resilient electricity system. As solar capacity ramps up to reach 30% of all generation, energy storage installations will skyrocket, adding an average of 40 gigawatt-hours (GWh) annually from 2022 – 2030.

IRA: Everything You Need to Know

The historic Inflation Reduction Act contains numerous provisions to invest in the solar and storage industries in the United States. SEIA has all of the resources you need to understand this complex policy.
Learn More