View more resources like the press release, infographic and webinar>>

2012 was a historic and busy year for the U.S. solar market. Photovoltaic (PV) installations grew 76% over 2011, to total 3,313 megawatts (MW) in 2012, with an estimated market value of $11.5 billion. Each market segment (residential, non-residential, and utility) showed growth over 2011, while the overall marketsin most U.S. states expanded as well. Installed prices for PV systems fell 27% during 2012 and at least 13% in each market segment. Nearly 83,000 homes installed solar PV, and cumulative PV installations in the U.S. surpassed 300,000. 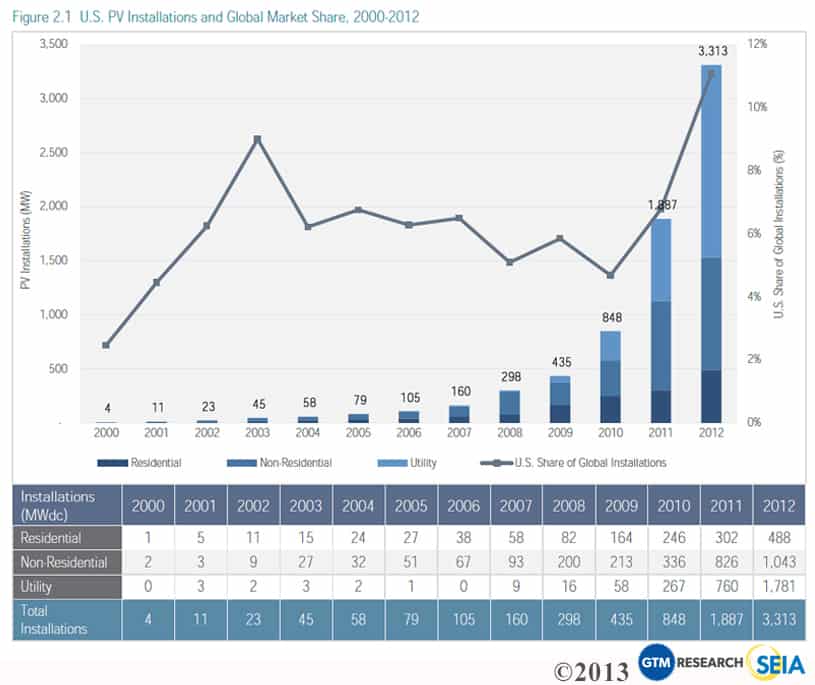 Apart from installation growth, four trends and events strongly shaped the market in 2012:

One trend already apparent in 2013 is diversification in project financing. Market participants have laid the groundwork for a variety of new ways to finance solar projects. Some of these have been introduced already and now need to scale, while others will become a reality for the first time this year. Examples of such structures include solar real estate investment trusts (REITs), crowdfunded solar projects, securitized solar assets, and solar inclusion in master limited partnerships (MLPs). 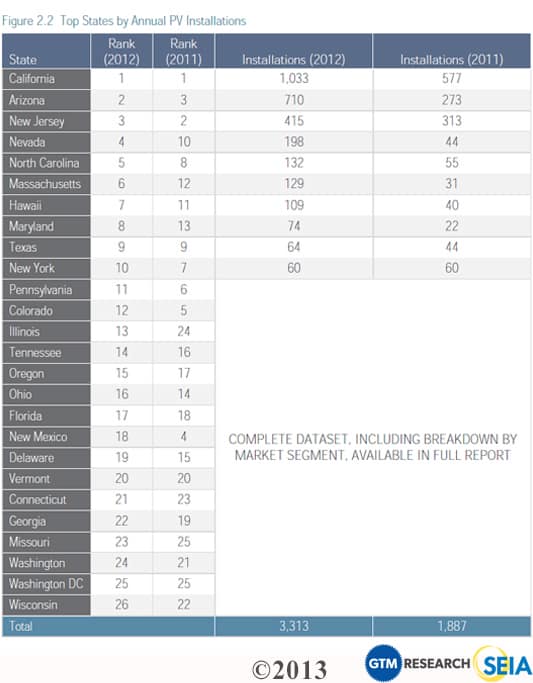 The U.S. installed 3,313 MW of PV in 2012, representing 76% annual growth over 2011. The U.S. market significantly outpaced the growth of the global market, and the U.S. market share of global installations rose above 10% for the first time in recent history.

California remained the largest state market in 2012, though the state’s historically dominant non-residential market was at times surpassed by New Jersey’s during the year. Arizona came in second, thanks largely to the completion of a number of utility-scale projects in the state. New Jersey had an impressive 415 MW installed during the year, but that growth will undoubtedly slow in 2013, as the market is overbuilt relative to the state’s renewable portfolio standard (RPS) schedule. Both North Carolina and Massachusetts grew significantly in 2012, driven particularly by ground-mounted projects between 1 MW and 10 MW. Nevada took fourth place thanks largely to a number of utility-scale projects reaching completion. Overall, a few states (specifically Colorado and Pennsylvania) declined year-over-year when individual utility projects are removed from the equation. 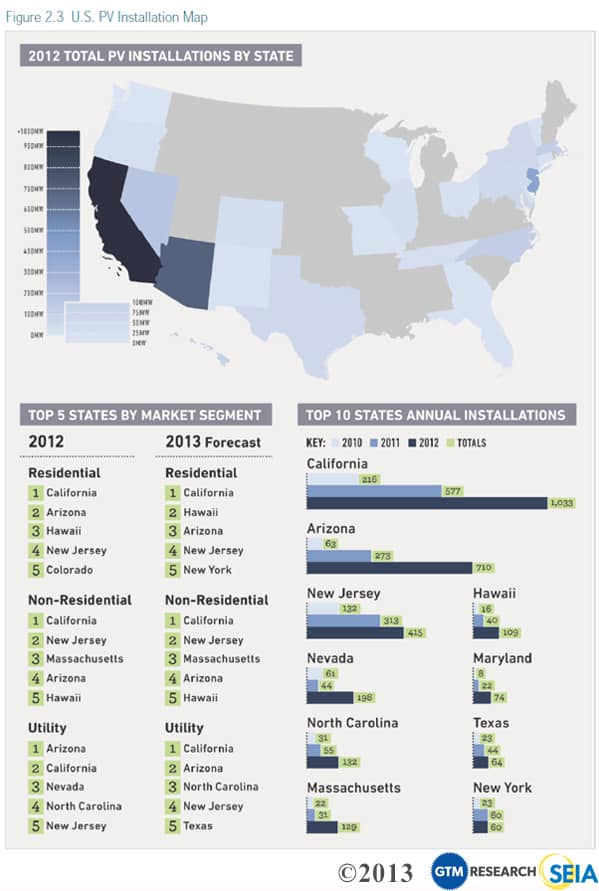 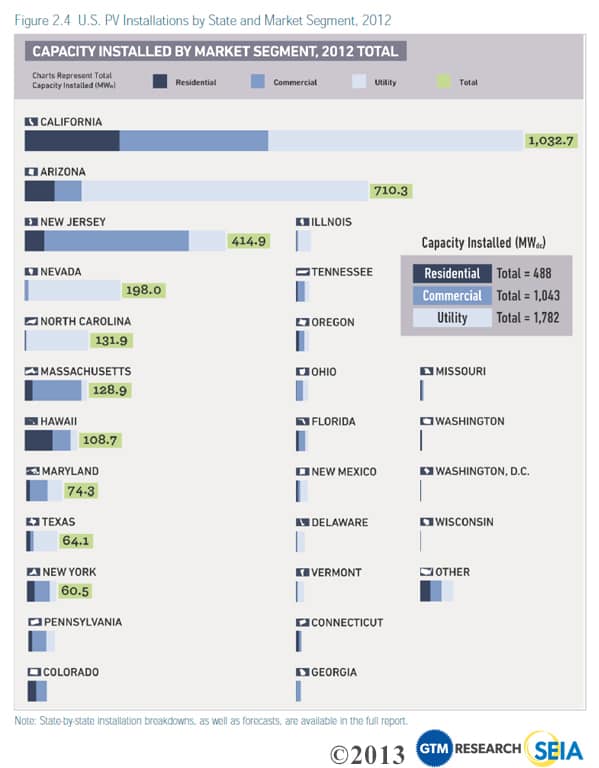 2012 was a tumultuous year in the non-residential market. The year started strong with high installation rates in California and New Jersey, both of which then began to trend downward mid-year. While California recovered and had its largest non-residential quarter ever in Q4, New Jersey installations continued to fall, depressing overall growth figures. Still, there were pockets of significant growth in a number of states including Massachusetts, which grew more than fourfold over 2011. Other notable growth states included Hawaii, Maryland, and New York.

The utility market grew more than any other in 2012, more than doubling over 2011 to reach 1,781 MW installed. Of this total, 874 MW came online in the fourth quarter alone. In fact, eight of the ten largest projects currently in operation were completed in 2012. The size of the contracted utility PV project pipeline has remained relatively steady over the past year, which implies that the rate of new procurement from utilities has kept pace with newly completed installations. Over the next two years, we expect some depletion in the pipeline as late-stage projects are completed. While some new PPAs will be signed, utility procurement has generally slowed down as a number of the most important utilities have met, or expect to meet, their RPS obligations. Still, pockets of new utility PV growth – particularly for systems sized in the 1 MW to 5 MW range – will exist in 2013 in locations such as North Carolina and California. 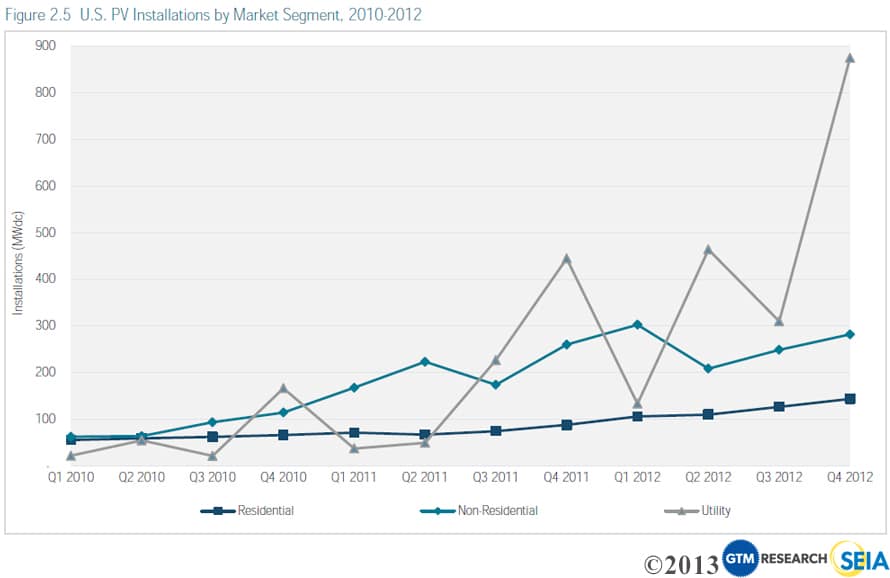 2012 was another banner year for installed price reductions for all types of installations in the U.S. Year-over-year, the national average price declined by 26.6%, from $4.10/W to $3.01/W. Quarter-over-quarter, the national weighted-average system price fell by 15.9% percent, from $3.58/W to $3.01/W. This capacity-weighted number is heavily impacted by the volume of utility-scale solar installed in a given quarter, and there was substantially more in Q4 2012 compared to Q3 2012. Individually, average residential and utility prices decreased, while non-residential prices were up slightly quarter-over-quarter. (It should be noted that prices reported are weighted averages based on all systems that were completed in Q4 in many locations.)

On the whole, however, installed PV prices vary greatly not only state-to-state, but also project-to-project.
Figure 2.6 displays this wide range of installed prices in Q4 2012. Residential system prices ranged from less than $4.00/W to more than $7.00/W. Non-residential prices were as low as $2.25/W and as high as $8.00/W. Utility prices also display high variability: a 50-MW-plus fixed-tilt installation will be significantly less expensive than a 1 MW pilot project that employs dual-axis tracking. (Note that the lowest installed cost of power does not necessarily yield the lowest levelized cost of energy, an important metric for measuring project returns, due to location.) 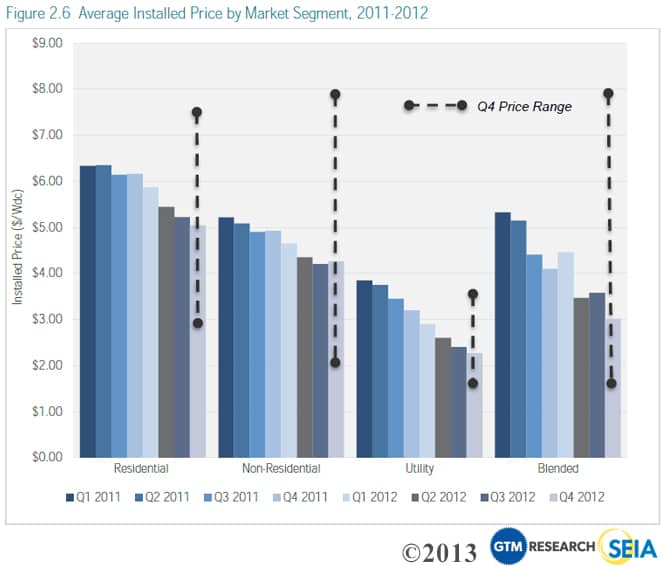 Pricing for polysilicon and PV components remained soft in Q4 2012 due to the persistence of the global oversupply environment that the industry has faced since early 2011. Blended polysilicon prices declined by 15% to fall below $20/kg. Blended module ASPs for Q4 2012 were down to $0.68/W, a staggering 41% lower than Q4 2011 levels of $1.15/W. As the International Trade Commission (ITC) issued its final decision in the antidumping (AD) and countervailing duty (CVD) investigations against Chinese c-Si cell manufacturers, GTM Research maintains that tariffs will not have a material impact on pricing in the U.S.; manufacturers are expected to continue to obtain U.S.-bound cells via tolling from Taiwan with an estimated cost impact of less than $0.10 per watt. This does not necessarily prohibit Chinese manufacturers from pricing modules well below their domestic competitors. Coupled with further conversion cost reductions and the continuing decline in ASPs, pricing could continue to fall in 2013, both globally and in the U.S. 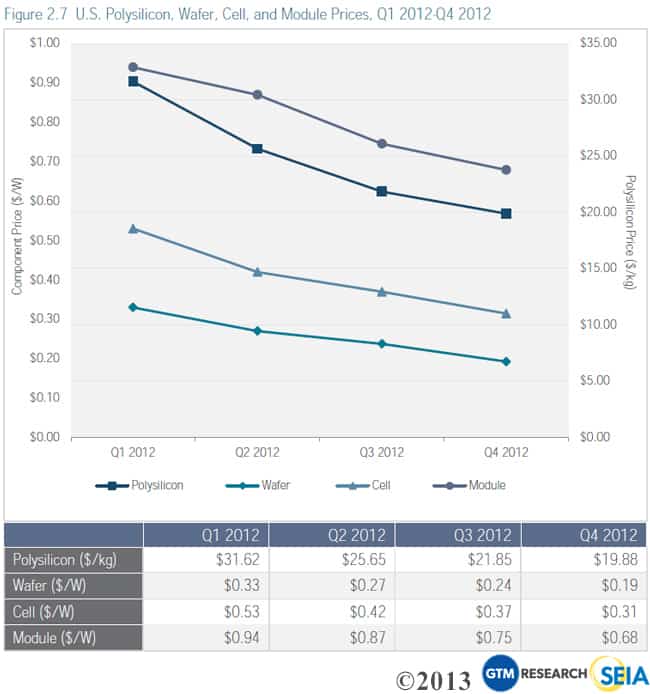 GTM Research forecasts that 4.3 GW of PV will be installed in the U.S. in 2013. This would represent 29% growth over 2012 – certainly down from the previous few years’ growth rate, but still well above the global growth rate. The primary reason for reduced growth will be the utility market. Whereas utility installations increased by 134% in 2012, we expect only 31% growth in 2013. On a quarterly basis, we anticipate 2013 to proceed similarly to the past few years, with a strong Q1, a mid-year downturn and a significant recovery toward the end of the year.

Looking beyond 2013, there are three major trends: 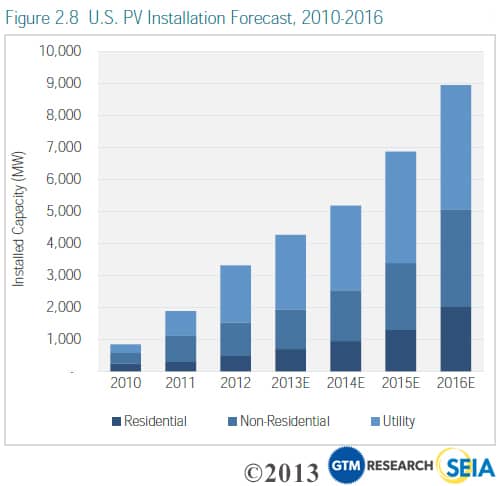 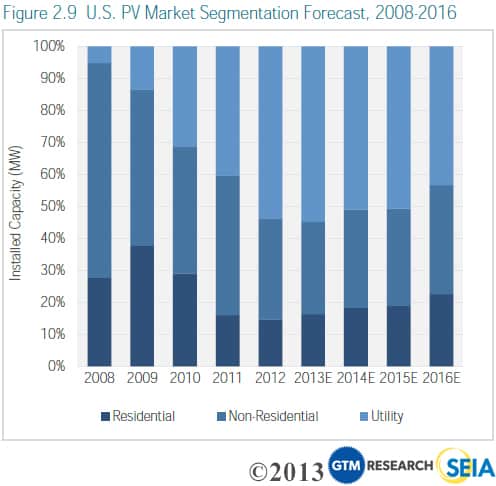 There was no concentrating solar capacity installed in the fourth quarter of 2012 and just 30 MWac came online over the course of the year. However, the development of several large CSP installations progressed significantly in 2012: 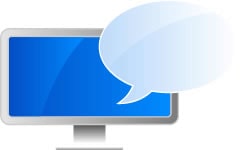 Access the archived recording of SEIA and GTM Research's review of the U.S. Solar Market InsightTM: 2012 Year-in-Review report, a look back 2012 highlights and accomplishments, a Q4 2012 data review and a forecast of what's to come for the remainder of 2013. The webinar will highlight trends throughout the U.S. market as well as some state-specific overviews. Listen now

Spread the news about solar's historic quarter and promote your company’s 2012 growth by using the template press release and letter-to-the-editor provided by SEIA. Get the Solar Data Cheat Sheet, a one-page resource of top-line data from our major reports.

2012 was a historic year for the U.S. solar industry. There were 3,313 megawatts (MW) of photovoltaic (PV) capacity installed throughout the year, which represents 76% growth over 2011’s record deployment totals. The fourth quarter of 2012 was also the largest quarter on record as 1,300 MW came online...read more

In 2012, the U.S. solar industry installed 3.3 GW of solar capacity, growing 76% over 2011's total. What happened in your state? Find out! According to the U.S. Solar Marker Insight Year-in-Review 2012 report by SEIA and GTM Research, 2012 was a record year for many states. California became the first state to...read more

#10: Texas The Lone Star state is ranked second for rooftop solar POTENTIAL, but all the way down at ten for 2012 installations. That’s why we’ve named it, “Most Untapped Potential.” If you include all the usable land (not just rooftops) in Texas, you’ll have twice the solar potential of any other state...read more

What's the state of the solar industry? Find out by watching a recording of our Google Hangout hosted live 11am on March 14, 2013. Guests include: Rhone Resch (President and CEO of SEIA), Shayle Kann (Director at GTM Research), Arno Harris (Chairman of the SEIA Board and CEO of Recurrent...read more

It has been a colossal year for solar, and we have all the data to prove it. The Solar Market Insight 2012 Year-in-Review by SEIA and GTM Research reveals that the solar market grew by a huge margin in 2012 – beating the anticipated annual growth for the year by 3 percent! Help us spread the word...read more