Water use requirements for solar power plants depend on the technology and climate conditions at the site. In general, all solar power technologies use a modest amount of water (approximately 20 gallons per megawatt hour, or gal/MWh ) for cleaning solar collection and reflection surfaces like mirrors, heliostats, and photovoltaic (PV) panels. For comparison, a typical family uses about 20,000 gallons of water each year, more than the amount of water needed per MW of photovoltaic generation capacity.

In all thermal power plants, whether fossil, nuclear, or concentrating solar, heat is used to boil water into steam, which runs a steam turbine to generate electricity.  The exhaust steam from the generator must be cooled prior to being heated again and turned back into steam. 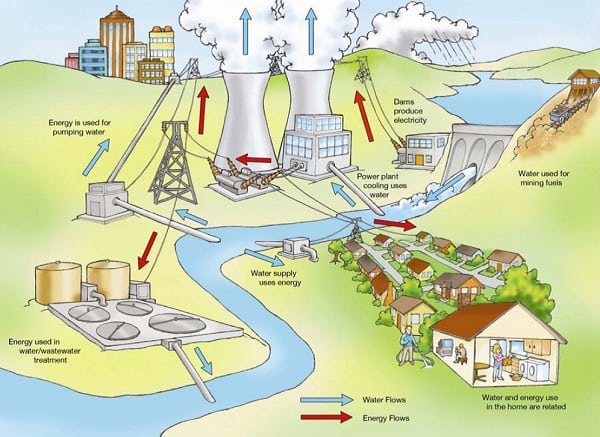 This cooling can be done with water (wet cooling) or air (dry cooling), or a combination of both (hybrid cooling). Water cooling is the most efficient. CSP plants using parabolic trough or power tower technologies must use some form of cooling, while PV solar facilities do not require water for cooling.

Heat is dissipated from the power plant through evaporation, most often via a cooling tower. Wet cooling is the most common cooling method for power plants, as it is the most efficient and cheapest cooling method available. Wet-cooled parabolic trough and power tower solar plants consume about the same amount of water as a coal-fired or nuclear power plant (500 to 800 gal/MWh).

The hybrid approach involves constructing both a wet and a dry cooling system. These systems can either operate in parallel or switch from dry cooling to wet cooling during the hottest hours of the day. Hybrid systems conserve less water than dry cooling but are more expensive than either alone. Crescent Dunes Solar Energy Project uses hybrid cooling.