Surge in utility-scale projects made solar top source of new power capacity in 2016; growth seen in dozens of states as prices continue to fall, dropping to all-time lows

BOSTON, Mass. and WASHINGTON, D.C. -The U.S. solar market had its biggest year ever in 2016, nearly doubling its previous record and adding more electric generating capacity than any other source of energy for the first time ever.

Over the next five years, the cumulative U.S. solar market is expected to nearly triple in size, even as a slight dip is expected in 2017. GTM Research and the Solar Energy Industries Association (SEIA) announced these historic figures today in the U.S. Solar Market Insight 2016 Year-in-Review report.

“It would be hard to overstate how impressive 2016 was for the solar industry,” said Abigail Ross Hopper, SEIA’s president and CEO. “Prices dropped to all-time lows, installations expanded in states across the country and job numbers soared. The bottom line is that more people are benefitting from solar now than at any point in the past, and while the market is changing, the broader trend over the next five years is going in one direction – and that’s up.”

The report forecasts that an impressive 13.2 gigawatts (GW) of solar PV will be installed in the U.S. in 2017, a 10 percent drop from 2016, though still 75 percent more than was installed in 2015. The dip will occur solely in the utility-scale market, following the unprecedented number of utility-scale projects that came online in the latter half of 2016, most originally scheduled for completion before the original expiration of the federal Investment Tax Credit, which has since been extended. By 2019, the utility-scale segment is expected to rebound, with year-over-year growth across the board.

“Though utility PV will reset from an origination perspective starting in 2017-2018, distributed solar is largely expected to continue to grow over the next few years due to rapid system cost declines and a growing number of states reaching grid parity," said Corey Honeyman, Associate Director of GTM Research. "That said, ongoing NEM and rate design battles - in conjunction with a declining incentive environment for non-residential PV - will continue to present risks to distributed solar growth." 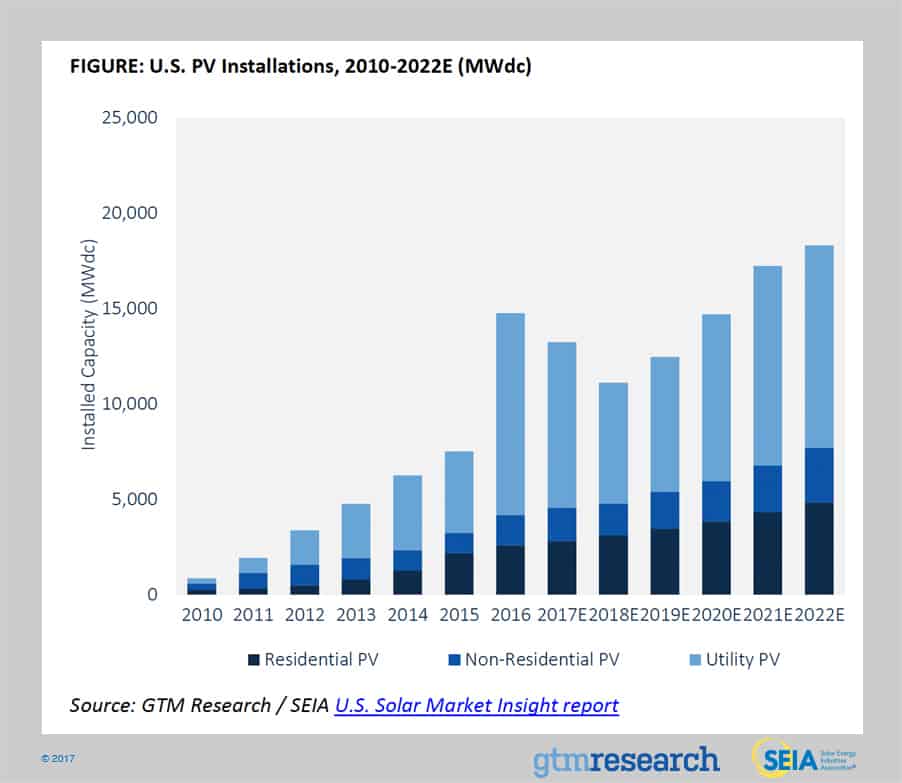 Twenty-two states each installed more than 100 megawatts (MW) in 2016, up from just two states in 2010. There was high growth in states that are not known for their solar market, including Georgia, Minnesota, South Carolina and Utah.

GTM Research expects the residential segment to grow 9 percent in 2017. California, which has historically accounted for nearly half of the U.S. residential market, is expected to decline in 2017; however, 36 of the 40 tracked states will grow year-over-year.

By 2019, the U.S. solar market is expected to resume year-over-year growth across all market segments. And by 2022, 24 states will be home to more than 1 GW of operating solar PV, up from nine today.

Celebrating its 43rd anniversary in 2017, the Solar Energy Industries Association® is the national trade association of the U.S. solar energy industry, which now employs more than 260,000 Americans. Through advocacy and education, SEIA® is building a strong solar industry to power America.  SEIA works with its 1,000 member companies to build jobs and diversity, champion the use of cost-competitive solar in America, remove market barriers and educate the public on the benefits of solar energy. Visit SEIA online a www.seia.org.

BOSTON, Mass. and WASHINGTON D.C.  – In 2017, the U.S. solar market expanded, adding double-digit gigawatt solar photovoltaic (PV) additions for the second year in a row. According to the newly released U.S.

Following rapid growth across the industry in 2016, the United States solar market added 2,044 megawatts of new capacity in the first quarter of 2017. As installations grow, prices continue to fall to new lows, with utility-scale system prices dropping below the $1 per watt barrier for the first time, according to GTM Research and the Solar Energy Industries Association’s (SEIA) latest U.S. Solar Market Insight Report.